When 3-year-old Evelyn is belting out songs to the Coco movie soundtrack, there is no hint her adrenal glands are unable to make essential hormones on their own. 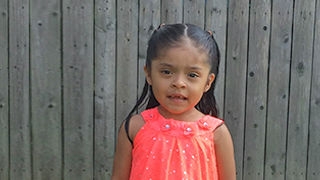 “She runs and plays like any normal kid. She loves singing,” says her mother, Ofelia, laughing. ”She tries her best, though she’s not too good.”

Fortunately, everything else about Evelyn and her future health is good — now that her congenital adrenal hyperplasia (CAH) is well managed with medications.

CAH is an inherited, lifelong condition that occurs when the adrenal glands, cone-shaped organs located at the top of each kidney, do not produce cortisol and in some cases, are unable to make aldosterone. Cortisol is essential to regulating energy, blood pressure and blood sugar. It also helps people recover from a sudden illness or injury. Aldosterone controls how much salt and water is in the body.

Evelyn was diagnosed with CAH at 2 weeks old. The blood test all newborns have signaled a 21-hydroxylase deficiency, which is a common cause of CAH. Follow-up blood work confirmed the diagnosis. She spent two weeks at Children’s Hospital of Philadelphia (CHOP) as doctors stabilized her hormones and determined the proper doses of hydrocortisone and fludrocortisone that would keep her healthy.

“We had never heard of this disease until the doctors told us Evelyn had it,” says Evelyn’s father, Mario.

That’s not surprising because it is rare; about one in 10,000 children have it. CAH is inherited in what’s called an autosomal recessive manner. That means both Mario and Ofelia were carriers of one mutated copy of the CYP21A2 gene. Their two older daughters, Angeline, 6, and Emeli, 4, were not affected. With each pregnancy, there is a one-in-four chance the baby will have CAH.

“It was sad news at first because of the risks,” Mario says. “We had a lot to learn about it and how to keep her healthy.”

The biggest risk is when people with CAH become ill or are injured. Normally, illness — such as a fever or stomach bug — triggers the adrenal glands to release more cortisol to fight off the illness. Kids with CAH don’t automatically have that response, so their parents need to give them a “stress” dose of their medications to compensate. Without the extra dose she is at risk for adrenal crisis, which is a life-threatening emergency and requires immediate medical intervention.

CHOP has the answers for CAH

At CHOP, children with CAH and their families are treated in the Adrenal and Puberty Center, where Director Maria Vogiatzi, MD, and nurse practitioner Michelle McLoughlin, MSN, CRNP, CPNP-AC, teach families how to recognize when stress dosing is needed and how to manage their child’s care.

“If, for example, she vomits or has a fever, we need to act fast and give her the extra medicine immediately,” Ofelia says. “We can give her pills or an injection. If we see she does not improve, we must take her to the emergency room as soon as possible.” Evelyn had three ER visits in her first 18 months, but none since.

“When she was a baby, it was pretty difficult,” Ofelia says, “but it’s gotten much easier now that she’s getting older.”

Patients, like Evelyn, have blood work done every three months. Dr. Vogiatzi and McLoughlin review the results and discuss any dosing adjustments during visits to the center. The center follows 120 patients with CAH, more than any other hospital in the region.

As a female with a classical type of CAH, Evelyn’s adrenal glands produce too much of some androgens. Androgens are generally considered male sex hormones, but females also have small amounts in their blood stream.

Some children can have reproductive issues or external genitalia abnormalities. Evelyn required surgery, but fortunately has a fully functioning reproductive system. “Thank God she has everything,” Mario says. “They told us she should be able to have children one day. She just needs to keep taking her medications to keep everything in balance.”

Maintaining that balance is the tricky part when treating CAH. The same steroids that keep Evelyn healthy can also cause early puberty and slow down her growth, putting her at risk for short stature, and increasing the chance she will be obese.

“At our last appointment, they told us she was gaining a little too much weight,” Ofelia says. “Now we see a nutritionist to keep her growth on track. She can still eat most things, just in smaller portions.” 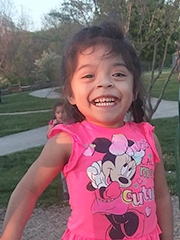 At her recent third birthday party, she had cake along with her friends. “But just one piece,” Ofelia says.

No limits on her future

Evelyn begins preschool this fall, and already her parents see glimpses of her promise. “We can see she’s very intelligent,” Ofelia says. “She can do anything she is determined to do.” Mario agrees: “I want her to be healthy so she can be whoever she wants to be in life.”