When Mila was born, a heart murmur was detected. Her parents, Jessica and Dan Roomberg, took her to Children's Hospital of Philadelphia (CHOP). “We were told it was common in newborns and not to worry,” says Jessica. “We were told to come back in a year.” Then, in the first few weeks of Mila’s life, Jessica and Dan discovered a few birthmarks on Mila’s back. They asked about them at her 1-month checkup, and the pediatrician told them to keep an eye on them, but Jessica and Dan learned the skin marks could be a sign of an underlying condition and wanted an immediate plan of action. 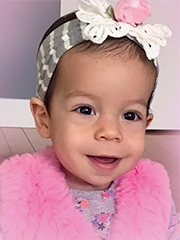 Concerned, Jessica and Dan brought Mila to see a dermatologist and the genetics team at CHOP. When Mila was about 2 months old, she was diagnosed with neurofibromatosis type 1 (NF1), a genetic disorder that occurs in about one in every 3,000 live births. NF1 is characterized by multiple café au lait (light brown) skin spots. Genetic counselors told Jessica and Dan that of people with NF1, 50% inherit the gene from their parents, but in the other 50%, including Mila, the disorder comes from a spontaneous gene mutation.

“We had never heard of NF1,” explains Dan. “We were trying to process it and understand it, how it manifests itself differently in each child.” Children with NF1 can have very mild to more severe manifestations. These include learning differences and delays, early puberty, hypertension, scoliosis and tumors. Some children develop tumors in the brain or on the optic nerve. These tumors are generally not cancerous, but they can cause significant health issues or vision impairment.

Jessica and Dan then took Mila to CHOP’s Neurofibromatosis Program, where the multidisciplinary team performed a number of tests to get baseline readings for the follow-up visits she would have every six months. 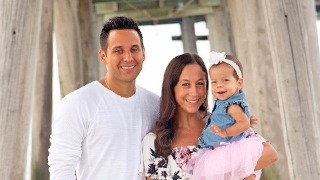 For the first year of her life, Mila had no symptoms. Her first birthday was a milestone that signaled it was time to check her heart murmur at CHOP’s Cardiac Center. Mila’s pediatric cardiologist discovered that a section of her aorta was narrowed. To get more information, an MRI was performed. Mila was sedated, and the doctors took her blood pressure. It was astonishingly high at 240/110 mmHg.

“It was the highest they had ever seen in such a young child,” says Jessica. “It was a complete shock. She had shown no signs at all. She was the happiest, smiley-est girl ever.” In addition to the aorta in her abdomen being narrow, both of the arteries to her kidneys were narrowed, restricting blood flow to her kidneys and causing her very high blood pressure.

Mila received maximal doses of several high-blood-pressure medications, which helped somewhat. Her heart was straining to pump against the ongoing high blood pressure. So in collaboration with Jessica and Dan, the CHOP doctors teamed up with the pediatric vascular surgeons at an outside institution. The plan was to continue treat her high blood pressure with medication until she was strong enough for surgery. At home, Mila spent the days playing and learning words. Jessica and Dan enjoyed the family time together, until Mila came down with a cold and her blood pressure spiked and would not come back under control. The doctors decided to proceed with the surgery at the partner institution.

“It was successful,” explains Jessica of the surgery. “We never left her side.” But a few hours later, Mila was back in the operating room due to a complication. She went into cardiac arrest during the procedure. She fought for one more day but did not survive. She was just 17 months old when she died.

After Mila passed away due to complications of the abdominal vascular surgery, her parents channeled their overwhelming grief into a gift to improve the taking of blood pressure and the recognition of high blood pressure in children under age 3.

“Our world just stopped,” says Jessica. “We lost our purpose. There are no words to describe the depression you go into.” Quickly, though, Jess and Dan knew they needed to do something to honor Mila’s life. They founded The Magical Mila Foundation.

One of the foundation’s goals is to raise awareness of NF1 and its manifestations. “We knew that Mila’s combination of NF1 and high blood pressure is rare,” explains Jessica. “So we thought, ‘Let’s do something that will help a lot of different children.’”

Their foundation’s mission is to increase awareness of the need to obtain proper blood pressure measurements in all subspecialties who care for children at increased risk of high blood pressure, from birth until 3 years of age — a particularly challenging age group for measuring blood pressure.

The Magical Mila Foundation recently made a gift to CHOP that will promote increased blood pressure awareness in the under-3 age group. By funding continuing medical education, sponsoring a program to use Doppler technology and increasing research into other new blood pressure technologies, they hope to improve the accuracy and ease of detection of high blood pressure in very young children with NF1 and in other high-risk conditions.

The results of the Magical Mila Foundation’s gift could be game-changing for future families facing situations where blood pressure measurement is crucial.