Cooper was 3 years old when a physical therapist who was part of his early intervention team suggested to his mother that his motor delays could be related to Duchenne muscular dystrophy.

Cooper’s mom, Ashley, quickly Googled the condition and was shocked to learn how many of the symptoms Cooper seemed to share with a condition she’d never heard of. She immediately called Children’s Hospital of Philadelphia (CHOP) for an appointment with the Neuromuscular Program. 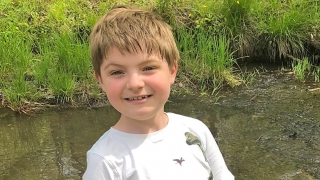 Soon after, the family met with Gihan Tennekoon, MBBS, MRCS, LCRP, an attending neurologist at CHOP’s Philadelphia hospital. Dr. Tennekoon examined Cooper, questioned his parents about what they had observed during his development, and ordered some blood tests. The tests revealed the level of CK protein in Cooper’s blood was dangerously high. To be consider in the “normal” range, Cooper’s levels should have been under 300; instead, his were over 10,000 — a strong indication something was very wrong.

Dr. Tennekoon ordered genetic testing that confirmed Cooper had Duchenne muscular dystrophy. The rare genetic disorder affects about one in every 3,600 male infants worldwide and is characterized by progressive muscle weakness and degeneration due to alterations of the dystrophin protein that works to keep muscle cells intact.

Children with Duchenne muscular dystrophy, commonly called DMD, typically begin to exhibit some symptoms of the disorder in early childhood — as Cooper did — but quickly worsen near puberty. The disease causes muscles to break down and be replaced with fatty deposits. Because of this, most children with Duchenne muscular dystrophy require the use of a wheelchair by their early teens. As the disease progresses, life-threatening heart and respiratory problems can also develop.

Dr. Tennekoon recommended that Cooper continue with therapies he’d begun in early intervention — physical, occupational and speech therapy — as part of his 504 education plan. The doctor also suggested steroids may help Cooper avoid some future infections, but his parents, Ashley and Tim, worried about the effects of long-term steroid use — especially during Cooper’s critical developmental years. They decided to delay steroids as long as possible.

Cooper began public school with his peers in Bucks County and quickly adapted to learning, playing and growing with his new friends. He could not run with the other kids, but he could walk fast and climb on playground equipment with ease — at least at first.

In second grade Cooper’s health began to falter. He fell more, moved slower and had a harder time getting up from the floor without assistance. Going up and down stairs also became challenging – even stepping off a curb was a potential fall hazard, his mom says.

“Cooper’s decline happened fairly quickly and none of us were ready,” Ashley says. “Cooper was frustrated when he couldn’t do the things he had before. And he would get upset seeing his younger brother or his friends do things he wanted to do. There were a lot of meltdowns in those days.”

Cooper’s family returned to CHOP for help managing both his physical decline and mental health. Cooper began steroid treatments and antidepressants to help his body and mind better deal with the changes.

While there is currently no cure for Duchenne muscular dystrophy, in recent years novel new treatments have been developed that show promise in halting the progression of symptoms.

Cooper was one of the first patients at CHOP to receive approval to begin Exondys 51, a weekly IV infusion therapy to treat certain types of DMD. The U.S. Food and Drug Administration approved the medication though a special use exception for children with DMD who have a confirmed mutation in the dystrophin gene that is amenable to exon 51 skipping. Only about 13 percent of patients with Duchenne muscular dystrophy  are eligible for this specialized treatment.

Thankfully, Cooper was one. He receives the infusions in the comfort of his home thanks to Children’s Hospital Home Care.

“The medications have definitely helped Cooper return to his easy-going self,” Ashley says. “He still gets frustrated sometimes, but he doesn’t let it overtake his whole life anymore.”

There’s a lot that happens before infusion therapy. First, the Children’s Hospital Home Care Pharmacy team coordinates with the physician to ensure safe and appropriate dosing and evaluates how the therapy may interact with any other medications Cooper is taking. Then, the Home Care precertification coordinator makes sure the medication is approved by the family’s insurance company to minimize out-of-pocket expenses for the family. The medication is prepared by the Home Care pharmacy, then delivered by a Home Care driver, who also brings additional supplies if needed. Each week, nurses administer the infusion therapy via a dedicated port Cooper has on his chest. The infusion takes about an hour, and the home care nurses observe Cooper for about an hour afterwards to ensure there are no unexpected effects of the therapy.

“We’ve really bonded with some of our home care nurses like Lorie Faber, [MSN, RN,] Lisa Higginson, [RN,] and Christine Connors, [BSN, RN,]” Ashley says. “They’ve become like part of our family and are a great sounding board whenever we have concerns.”

Back to school during COVID-19

CHOP’s Home Care team has been especially helpful to Cooper’s family during COVID-19. Not only has the team continued to deliver care to Cooper at home, but it has also helped arrange virtual visits with many of Cooper’s specialists and therapists so he can continue to receive regular assessments and care plan modification as needed.

When Cooper’s family learned his school district in Bucks County, Pa., was reopening for in-person learning in Fall 2020, they sought advice from his home care team. Would it be safe for him to return to in-person learning?

While it was ultimately the family’s choice to make, the CHOP Home Care team discussed ways Cooper and his family could reduce the risk of infection: wearing a mask, physical distancing and frequent hand washing. To be successful, Cooper would need to take an active role in protecting himself.

Cooper and his parents decided going back to school would benefit him academically, developmentally and socially. They also believed Cooper could remain safe from COVID-19 because all students and staff needed to follow the same COVID-19 safety rules.

“I’m not sure how Cooper will feel in the future … if he’s the only one wearing a facemask to protect his health, but for now when everyone is doing it, it’s fine,” Ashley says.

Now in fourth grade, Cooper has successfully attended school all year and is enjoying math and art. He continues to receive supportive services at school and is thriving academically.

When he’s home, Cooper spends his free time hanging out with his brother Hunter and a close friend who lives down the block. They’re all looking forward to summer with dips in the family’s pool and trips to the Jersey shore.

“We still pray every day for a cure or a new gene therapy to improve Cooper’s symptoms, but we’re also so grateful for the time we have and the care he’s received at CHOP at every step of our journey,” Ashley says.