Kai is a happy 19-year-old who says, “I’m a two-time cancer survivor and my life story has just begun.” But he also admits that a dark question used to run through his mind that most people never have to ask themselves: “How many more cancers am I going to have in my life?” When Kai was 2, he was diagnosed with neuroblastoma, a cancer of the nerve cells. Then as a teenager, scans detected he had thyroid cancer. It is one of the long-term side effects of the cancer treatment he underwent as a toddler. 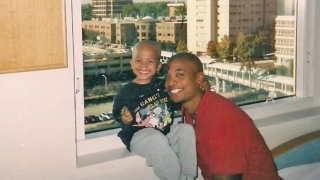 Kai’s stage IV neuroblastoma sent him into an intense treatment journey that lasted more than three years and involved chemotherapy, radiation, stem cell transplant, immunotherapy and surgery. His parents, Shana and Ven, sought out doctors in their home state of North Carolina, in New York and at Children's Hospital of Philadelphia (CHOP). Several times, Kai was declared cancer-free, only to relapse. Finally, in February 2008, when he was 5, tests again detected no cancer. This time, it didn’t come back.

“It pains me to think of all the treatment his little body went through,” says Shana. Kai went back to school and returned to just being a kid. When the family moved to the Philadelphia area because of a job opportunity, Kai came to CHOP for his regular checkups.

The repercussions of cancer treatment

Prior to starting first grade, Kai was discovered to have hearing loss, a side effect of his cancer treatment. “He wore hearing aids for about two years, but then he just wasn’t doing it,” says Shana. He’s learned to navigate the world with his limited hearing.

After being cancer-free for several years, Kai started his care with the team at CHOP’s Childhood Cancer Survivorship Program, where patients and families learn to navigate the physical and emotional issues that come with life after cancer. One of those physical problems for Kai showed up in middle school, when he developed osteochondromas, an overgrowth of cartilage and bone spurs that mostly occur at the end of the long bones but can happen in any bone in the body. Researchers have found an association between developing the condition and previous radiation therapy. The two osteochondromas in Kai’s right leg became so painful, he couldn’t play soccer and eventually needed to use crutches. His friends helped him get around school until, at age 12, he underwent surgery to remove the osteochondromas.

‘If I hadn’t had cancer’

CHOP developed the Endocrine Late Effects after Cancer Therapy (ELECT) Program because more than half of children treated for cancer experience long-term, or “late,” problems with their endocrine system. Kai was closely monitored by his CHOP team. “His endocrinologist has been so great,” says Shana. “She’s very involved. You can just tell how much she cares.”

Kai’s first endocrine-related problem was poor growth, so he began getting daily shots of growth hormone to help him grow better. “For a while he was OK with it,” explains Shana, “then he wasn’t.” The shots interfered with activities like sleepovers, and ultimately, weren’t having much effect.

Kai is highly aware that he is, as he puts it, “the shortest person in my friend group,” and that this is a result of his cancer treatment. “I would be walking around school thinking how tall I would be if I hadn’t had cancer,” he admits. “I still hold this chance in my mind that as I get older, I will have a little growth spurt and eventually become a ‘normal’ height. But until then, I have to keep my confidence high and just be a good sport about what my situation is.”

Exercising and playing sports have given him a feeling of control over his body that the cancer and its treatment took away. He has enjoyed playing point guard for the basketball teams at his high school and the local recreation center. As the years since his cancer diagnosis stretched on, he began to wonder why he still needed to see doctors at CHOP.

“Just when he was saying, ‘Why do I have to keep getting checked every year?’ they found the thyroid cancer,” says Shana. It was another endocrine-related late effect of treatment. 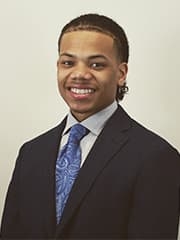 “When I first found out, my emotions went numb,” says Kai of the thyroid cancer. “But I knew with the help of the CHOP team and, most of all, God, I would get through it because I’ve been through much worse.”

To treat the cancer, Kai’s thyroid was surgically removed. Then, to prepare for the next step, radioactive iodine treatment, he needed to follow a low-iodine diet to starve his body of the mineral. Besides iodized salt, he couldn’t eat things such as all dairy products, egg yolks and seafood. “He was missing so much,” Shana says of the diet. “At least it happened after the holidays.”

Radioactive iodine treatment consists of taking a pill with radioactive iodine that destroys any remaining thyroid tissue as well as any microscopic areas of thyroid cancer that can’t be removed during surgery. The pill makes a person mildly radioactive as it does its work, so Kai needed to be quarantined for several days.

With everything he’s been through, Kai understands that his peers will never understand his experiences. “I realize I’m not an ‘average Joe,’” he says, “but I will always be happy with who I am.” He hopes his story will help other kids. “I wish there was a way to tell every child who has to experience what I went through that it’s a long journey, and I’m not going to lie and say it’s easy, but never lose faith even when you feel defeated.” 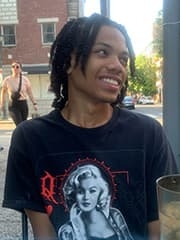 Right now I am 19 years old and attending Temple University. I just finished my first year of college, and I’m working to build my own car detailing business, Davis Detailing. I feel “normal” these days not thinking about the effects cancer had on me, but focusing on my present and future self. My thyroid scar has dimmed down and you can barely see it, but when someone does mention it, I am happy to tell them all about it! I’m a two-time cancer survivor and my life story has just begun. Being so young motivates me to give others inspiration in any way possible.