Wilbert is a sociable toddler who says “hello” to everyone he meets. He loves to dance to the “Baby Shark” song, and he runs so fast that people predict he will be a track star someday.

His mother, Tonetta, however, knows that epidermolysis bullosa may limit what Wilbert can do. Despite the disease, she is optimistic that he will find ways to excel.

A rare diagnosis of epidermolysis bullosa 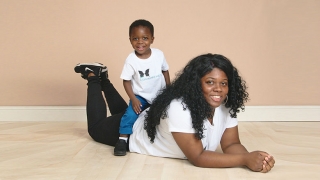 Wilbert weighed less than 5 pounds when he was born full term at the Hospital of the University of Pennsylvania. He was admitted to the neonatal intensive care unit where his care team noticed erosions on his face.

The pediatric dermatology team from Children’s Hospital of Philadelphia (CHOP) was called in for consultation. His exam was consistent with epidermolysis bullosa (EB), and genetic testing confirmed that Wilbert indeed had EB, a rare genetic disease that causes painful skin blistering. In many cases, the disease goes beyond the skin to involve other organs, requiring coordinated care from different specialists.

“They explained what it was and what could happen to him,” remembers Tonetta. “It was very scary because at the time we didn’t know how severe it was.”

Wilbert was transferred to the Newborn/Infant Intensive Care Unit (N/IICU) at CHOP, where specialists, including Marissa J. Perman, MD, Director of the Epidermolysis Bullosa Multidisciplinary Clinic, cared for him. Wilbert’s skin was very fragile; normal newborn care such as picking Wilbert up under his arms could easily cause painful wounds. He required special handling and very gentle care which was expertly provided by the N/IICU nurses and other care providers.

“It was much better once he was there because they knew how to handle him and take care of his needs,” adds Tonetta.

During Wilbert’s two weeks in the N/IICU, Tonetta learned to care for her son and wrap his wounds. The N/IICU staff arranged for a nurse to be present during his first few days at home.

But even with that support, Tonetta went through a process of trial and error to learn what her son could tolerate. Bathing was too rough on Wilbert’s skin, so Tonetta gently washed him with a sponge. Certain soaps caused him to blister. She tried different types of socks and clothing until she found ones that weren’t irritating.

It was challenging, but it could have been worse. Wilbert was diagnosed with the dominant dystrophic form of EB, which in many cases is a less severe form.

Teaching others about EB

Tonetta enrolled Wilbert in daycare when he was 3 months old. Nobody had heard of the disease. And because Wilbert had a milder form, it wasn’t obvious from looking at him that he required special care.

Tonetta created packets of information and links to videos to educate his caregivers about EB. The process of teaching others about her son’s condition is ongoing as Wilbert grows and becomes more active.

She also created a Facebook group, Parents of EB, where parents of children with EB can connect with and support one another. People from around the country have reached out to Tonetta and thanked her for giving them a place to discuss their challenges.

“I feel it’s better to talk about it instead of living in fear of it,” Tonetta says.

Adjusting to life with EB 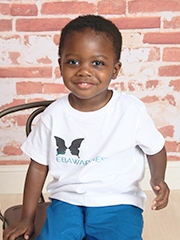 As Wilbert gets older, he’s becoming aware that other kids can do things he can’t. He is not allowed outside for recess on warm days because his skin will blister. Certain playground equipment is off limits; a fall can cause a serious wound. His mother and teachers offer plenty of alternatives. They play games with him inside when the weather is hot. Tonetta brings Wilbert to indoor parks with inflatable equipment during the summertime.

“I know that eventually I’ll have to be the one to explain to him what his disorder is and to let him know it doesn’t define him,” Tonetta says.

Every six months, Tonetta drives Wilbert two hours from their home in Delaware to the EB multidisciplinary clinic at CHOP where she receives support and ongoing learning from multiple specialists, including dermatology, wound care, gastroenterology and nutrition, pain management, psychology, and physical and occupational therapy. For example, she has learned from Dr. Perman and the other specialists to soften Wilbert’s overly thick toenails before cutting them. She also gives him a mild laxative each day to manage his constipation, both symptoms of EB.

“Not a lot of people have the disorder, so it’s comforting to know you can go and reach out to them, and they can help any situation you’re dealing with,” she says.