Just before Vanessa’s sixth birthday, a cancerous mass was detected in the bones surrounding the left side of her right eyeball and extending behind it. The tumor, which robbed her of sight in that eye, required both chemotherapy and proton radiation. Through it all, she remained “resilient,” says her father, Steven, and now, more than five years later, she plays various sports throughout the year.

In March 2014, Vanessa started having symptoms of what her parents thought was a stomach virus. “It would go away and come back,” says her mother, Stacie. Their pediatrician ordered various tests, and the results all looked normal. “Then one day in early April, her teacher said she was putting her head on the desk during class,” says Stacie. “That same day, she slept from the time she arrived home from school until the next morning — and she woke up still tired.”

Growing increasingly concerned about Vanessa’s lethargy, Steven brought her to their local ER in New Jersey. The doctors performed various tests and again could not identify anything unusual, but Steven pushed for answers. They spoke to her pediatrician, who recommended imaging. After being in the ER for most of the day, she was admitted. Shortly thereafter, while in Vanessa’s hospital room, as a number of doctors and nurses entered, Stacie received a phone call from their pediatrician with the heart-breaking news that a CAT scan revealed a mass in Vanessa’s head, which would later be diagnosed as Ewing sarcoma of the maxillary bone. Vanessa stayed the night at the hospital and was transported to Children's Hospital of Philadelphia (CHOP) the next day.

A devastating discovery of vision loss

“Our life was turned upside-down,” says Steven. “One day everything’s OK, then the next day, you’re told your child has a mass in their head. We found out about the mass on Friday evening. That Saturday morning in her hospital room, before she was transferred to CHOP by ambulance, I was playing with her, passing the time. At one point, she covered her left eye with her hand and said, ‘I can’t see.’ That’s how we found out she lost vision in her right eye.” The tumor had damaged her optic nerve, causing the vision loss. 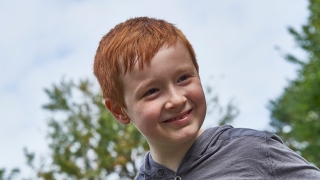 At CHOP, under the care of pediatric oncologist Richard Womer, MD, Vanessa received 14 cycles of chemotherapy, each occurring at least two weeks apart and requiring a few days in the hospital. Then, five days a week for six weeks, she received 31 doses of proton radiation, an advanced form of radiation that is highly targeted and often leads to fewer side effects.

She handled her treatment regimen impressively well for a 6-year-old. “We always tried to explain to her what was happening at a level she could understand so there would be no surprises,” says Steven. “She was tough throughout her treatment. What helped her tremendously was the fact that she quickly accepted all of the procedures that she would need to endure regardless of how uncomfortable some were. For example, at first during her port access she would cry and make herself upset, but then she understood it was going to happen, so staying calm made the process more tolerable and quicker for her. We had this saying that we never let her forget throughout her treatment — it was that she was our beautiful, brave, strong, tough girl. And that is exactly what she was and is.”

The family developed a close relationship with Vanessa’s care team. “Between Dr. Womer, the nurse practitioners, all the nurses and the child life specialist — everybody was great,” says Steven. “There are not enough words to describe the care and compassion they put into Vanessa’s medical treatment and ensuring her hospital stays were as comfortable as possible as she was fighting for her life.”

For the radiation to be delivered precisely to the tumor site, her head needed to be immobilized by a mesh mask secured to the table. Many young children require sedation for this procedure; Vanessa was able to handle it without sedation. The round-trip drive each day for proton radiation was very long, and she understood that being sedated would increase the time away from home by a few hours. “Her appointments took about 30 minutes,” Steven explains. “I would walk her into the room, the technicians would get her ready, which included putting her mask on and securing it to the table. A short time later, she would be done, and we were then quickly on our way back home.”

Vanessa was determined not to let anything stand in her way to complete her treatment as soon as possible. On Halloween 2014, the results from Vanessa’s bloodwork performed in New Jersey showed she was fine to undergo her next treatment. Stacie and Steven asked her if she wanted to make the long drive to CHOP or go trick-or-treating. “She decided to go to CHOP,” says Steven. “She said, ‘I want to go get it over with.’ That was her mentality. That was her 13th chemo treatment. Because of her decision, she was released from CHOP for her 14th and final treatment on the Tuesday before Thanksgiving. If she had decided on trick-or-treating, she probably would have been at CHOP for Thanksgiving.”

Vanessa returns to CHOP for follow-ups and screenings. A few years ago, it was discovered that the radiation damaged her pituitary gland, causing her growth to slow. This is one of the treatment-related endocrine problems for which patients are seen at CHOP’s Endocrine Late Effects after Cancer Therapy (ELECT) Program, led by Sogol Mostoufi-Moab, MD, MSCE, a dual-certified pediatric oncologist and endocrinologist. Over half of pediatric cancer patients will develop endocrine problems. Luckily for Vanessa, after three years of growth hormones, she’s now about 5’5”. “Before her growth hormone treatments, she was a short, pudgy girl, and now she is a tall and skinny girl,” Steven says with a laugh. “During our first appointment with Dr. Mostoufi, we felt a sense of comfort that we were in the right place to address Vanessa’s growth concerns,” Stacie adds. “Dr. Mostoufi addressed all our questions in such a calm and comforting manner. We could not be happier with the outcome under Dr. Mostoufi’s care.”

The family, however, is deeply aware of how quickly things can change from moment to moment. “When I brought Vanessa to the ER that day, I knew she was sick, but I never imagined being told she had cancer,” says Steven. “Our lives changed instantly, forever. Even to this day, I am always wondering if something else will happen. The passage of time has lessened this feeling, but it is always there. Her annual post-treatment scans and tests are especially a difficult time to deal with. For Stacie and me, when we look back as to what normal is, there is the time before and the time after Vanessa’s diagnosis. That is our reality, that is our normal.” Stacie and Steven are aware of the constant physical reminders of the battle their daughter bravely fought: the lost vision in her right eye; some hair loss due to the radiation; the scars from her biopsy, bone marrow test and port insertion. “Vanessa remembers certain specific moments from her eight months of treatment — mostly good moments,” says Steven. “Fortunately for her, life is mostly normal as with any other girl her age, with school and friends. She enjoys playing soccer and basketball. She spends time using her iPhone. All typical things.” 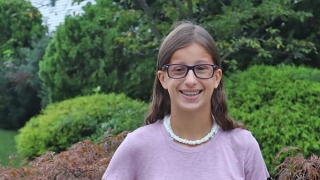 “There are certain issues she deals with,” explains Stacie. “Probably the most frustrating for her, especially since she is very active, is that she needs a lot more sleep than kids her age. It is challenging for her to stay up a little late and then get up at a normal time the next day and not feel tired for a day or two. Her body does not recover easily.”

The family gets emotional when talking about CHOP. “They did an extraordinary job guiding us through an impossible situation we as parents faced, and they were equally as fantastic in helping Vanessa through her cancer treatments,” says Steven.

“They continue to provide Vanessa excellent care as she deals with late effects. They are beyond incredible. Vanessa is here today living her life because of CHOP.”

Neuroblastoma kept Ruby in a wheelchair but didn't shake her courage, drive or determination to succeed. 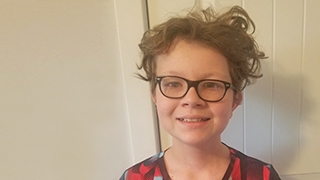 A four-time cancer survivor makes it his mission to inspire courage in others.