Camren, now a curious, active 14-month-old who loves to dance, was born with dense cataracts on both eyes. Camren’s father’s family has a history of visual impairment, and prenatal testing revealed an eye problem, so the condition wasn’t exactly a surprise to his family or his doctors. What shocked Camren’s ophthalmologist was the rejection of his application for disability benefits. Luckily, the Family Justice Partnership, a service at Children’s Hospital of Philadelphia (CHOP), was able to provide Camren and his mother with a lawyer who secured a swift reversal of the denial. 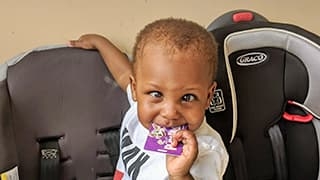 “We’re so happy that Camren will be getting the maximum award,” says his mother, Deja. She looks forward to using the money to rent an apartment so that she, Camren and Camren’s 3-year-old brother, Noah, can move out of the single room they all share at Deja’s sisters’ home.

Camren underwent his first surgery, to remove one of his congenital cataracts, when he was 1 month old; the other cataract was removed about a week later. A month after that, Camren was diagnosed with glaucoma, which would eventually require more surgeries. CHOP physicians advised Deja to apply for Supplemental Security Income (SSI) on Camren’s behalf.

SSI, administered by the Social Security Administration, provides an income supplement to people with disabilities who have limited income and resources. Camren’s father, Eugene, is disabled, and Deja’s job at a Philadelphia convenience store doesn’t provide enough income to pay the rent. Individuals who meet the legal definition of blindness automatically qualify as disabled, so Camren seemed a likely prospect for SSI benefits.

Deja worked with Camren’s CHOP doctors to put together an application that included all the information necessary to make a determination in Camren’s favor, says Jen Burdick, the lawyer who eventually handled the appeal.

“It’s hard to say why it was denied,” Burdick says.

Benefits ruling is hard to understand

The adjudicator, who acts like a judge in these types of cases, reviewed Camren’s file when Camren was about 5 months old — after his first glaucoma surgery, in which a flexible tube shunt was implanted in his eye to drain fluid, relieving pressure that can cause irreversible damage to the optic nerve.

Noting that Camren had received excellent treatment for his eye problems, the adjudicator offered the opinion a second glaucoma surgery, planned for later in the year, had the potential to correct his vision. He ruled that Camren didn’t qualify as legally blind.

“After a denial, many parents just get discouraged and give up,” says Burdick. “If you submit all the evidence, and Social Security says, no, you’re not eligible, a lot of people will just take that on faith.”

Doctors go to bat for Camren

But Camren’s doctors at CHOP were appalled.

“The rules for blindness are pretty well established,” Burdick says, and ophthalmologist Monte D. Mills, MD, was confident that Camren met the criteria — so much so that he sat down and wrote a letter to the Social Security Administration, arguing that although Camren was not old enough to take a recognition visual acuity test (a 5-month-old can’t be expected to read any letters from a chart), he is “clearly severely visually impaired in both eyes, and qualifies as legally blind.”

“This is not a borderline case,” says Dr. Mills. “It would be pretty obvious even to someone who is not an MD that his visual impairment is severe. And the glaucoma surgery Camren had typically doesn’t improve vision; it just stabilizes the eye to prevent further damage.”

Dr. Mills notes that most people who are legally blind have some vision, even if it’s minimal. “It’s important they have access to services that enable them to maximize whatever visual capacity they have. This is especially important for young children because the neurological part of the vision system won’t develop properly if the eyes are not providing sensory information. It would be a shame for a child not to have access to what he needs and what his family needs.”

“I’ve been representing kids in SSI cases for a while,” Burdick says, “and it’s not that often you get a doctor who really goes to bat for his patient this way. I find that kind of commitment more often at CHOP.”

Family Justice Partnership to the rescue

“The rules are very complex,” Burdick notes, “and especially if it’s your first time applying for benefits, it’s hard for a layperson to navigate this system. You don’t know what arguments to make. And it takes an emotional toll on a parent to appear at a hearing and discuss every implication of a child’s disability in detail with an adjudicator.”

“I didn’t have any experience with this process,” Deja says. “I wouldn’t have known how to appeal on my own.”

It isn’t easy for parents of disabled children to find representation in SSI claims, Burdick says. Because children’s cases are not very lucrative for lawyers, few for-profit firms take them, and they require special expertise because SSI rules are different for children than for adults.

Grounds for reconsideration of SSI claim

When Burdick, who has more than five years’ worth of experience handling children’s SSI claims, reviewed Camren’s file, she discovered a piece of evidence the adjudicator had not taken into account: He had disregarded an assessment showing that Camren’s visual impairment had affected his progress in all six categories of functioning tested. Benefits should be awarded if delays are found in just two categories, Burdick said.

Armed with these findings, Burdick asked the SSA to reverse the ruling without requiring Deja to appear at a hearing. The request was granted about six months after the appeal was filed.

During Camren’s surgeries, Deja took night shifts so that she could be with him at the hospital. It was a relief not to have to appear in court, and she was pleased at the turnaround time. “I was hearing that the appeal could have taken about a year,” she said.

Family Justice Partnership is there for CHOP families

According to Gottesfeld, Camren’s family is one of almost 100 families CHOP’s Legal Medical Partnership has helped in the 10 months since it began a partnership with CLS funded by a gift from law firm Reed Smith LLP.

The MLP handles a variety of cases relating to issues affecting patients’ health: among them are lack of access to adequate food or benefits, housing problems, utility shutoffs, special-education rights and guardianship issues.

The program also provides training for physicians and staff, both in recognizing cases for referral and in understanding substantive legal issues — such as eligibility requirements for disability benefits — related to healthcare.

Gottesfeld, who works part time for the project, will soon be joined by a second, full-time attorney, funded by CHOP donors, the Philadelphia Health Partnership and the Independence Foundation. 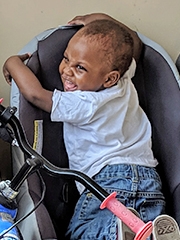 Meanwhile, Camren is thriving. He’s fond of toys that light up and make sounds, and upbeat music inspires him to dance. Having a 3-year-old brother who is a couple of steps ahead of him is beneficial, Deja says.

“It motivates him,” she says. “He really wants to be able to do what Noah is doing.”

A caseworker at CHOP has referred Camren to an early intervention program that helps the families of young children with disabilities adapt their homes and other settings to make it easier for kids to develop and reach learning goals. A special instructor has visited Camren at home and will soon visit him at day care.

“Camren has achieved his goal of walking toward objects,” Deja notes, “so he’s ready to move on to the next step!”

Perhaps that step will be a dance step.