When 13-year-old Akil got sick during a family reunion in July, his parents initially thought it was just a stomach virus. But Akil's symptoms — vomiting, diarrhea and acute stomach pain persisted — even after the family returned home to Maryland. Nausea medication didn't help, and soon Akil became so dehydrated, he had to be hospitalized. It would be more than six weeks until Akil's family knew what was wrong with him — and three months until he was well enough to go home.

When Akil first returned home from the reunion, his parents, Tyeisha and Primus, took him to the pediatrician who prescribed nausea medication to combat Akil's symptoms. The medication didn't help.

Next, Akil's parents took him to a local hospital. He'd become dehydrated and needed fluids. When Akil still couldn't hold down food four days later, his parents had him transferred by ambulance to a larger hospital in Maryland.

Akil was sedated for his pain and received nourishment intravenously while hospitalized. Doctors diagnosed him with cyclic vomiting, a condition that involves recurrent episodes of severe nausea, vomiting and exhaustion with periods of normal health in between. While there's no known cause of cyclic vomiting, doctors believed Akil's condition may have been caused by stress.

His mother, Tyeisha, had her doubts, however. “I know my child. I know when he’s stressed. It just didn’t fit,” she says.

Akil spent six weeks in the Maryland hospital while his parents searched for answers. They contacted numerous clinicians around the region. Each one agreed with the initial diagnosis of cyclic vomiting and said they wouldn’t treat it any differently.

The family felt increasingly helpless and desperate. Then, Tyeisha learned about the cutting-edge diagnostic services and specialized care available at the Suzi and Scott Lustgarten Center for GI Motility at Children’s Hospital of Philadelphia (CHOP).

Tyeisha called John T. Boyle, MD, FAAP, Program Director of the Lustgarten Center and pediatric gastroenterologist in the Division of Gastroenterology, Hepatology and Nutrition at CHOP. The conversation convinced her and her husband Primus to bring Akil to CHOP.

“When we got to CHOP, the first thing we heard was, ‘I’m sorry we can’t tell you what it is right now, but we will figure it out,’” Tyeisha remembers.

“Everybody said it so confidently, it made us feel so much better.”

CHOP's Lustgarten Center for GI Motility is one of the few pediatric programs in the nation that offers world-class diagnostic resources and services to children with gastrointestinal motility disorders. The center provides a full spectrum of diagnostic tests and integrated patient-centered services.

For children with gastrointestinal motility disorders, it's important to rule out mechanical, infectious, inflammatory or biochemical reasons for the delayed gastric emptying. In Akil's case, clinicians suspected he had gastroparesis, so they performed a manometric study, to measure the strength and pressure in his GI tract, and a gastric emptying study, considered the "gold standard" for diagnosing gastroparesis.

During the gastric emptying study, Akil is given a standard radio-labeled solid meal, then clinicians measure how quickly the food passes through his gastrointestinal tract. The test showed Akil was emptying food very slowly — just 7 percent over a two-hour period. With that information, Dr. Boyle was able to conclusively diagnose Akil with gastroparesis and gastric dysmotility.

The road to recovery

Even with an accurate diagnosis, Akil had a long road to recovery ahead of him. Gastroparesis is a very challenging disorder to treat. There is no standardized medical therapy, so each treatment must be individualized. The Lustgarten Center’s integrated approach to care helped equip Akil and his family for the journey toward wellness.

Georgia Pitsakis, MSW, LCSW, a clinical social worker who works with the Lustgarten Center, collaborated with Akil, his parents and his medical team throughout his stay at CHOP — and when he returned home. Akil's inpatient team arranged for the teen to have regular aromatherapy sessions, which he found relaxing. And Georgia connected Akil's parents with resources, both at the hospital and back home in Maryland, to address their concerns and practical needs.

“The value of Georgia's social work efforts were priceless and resourceful to say the least,” Tyeisha says. “I was so happy to see how she truly collaborated with Akil's entire team — educational and medical — to ensure that everyone was on one accord with his treatment.”

Responding to his needs

During Akil's four-week stay at CHOP, at least one parent stayed at his bedside every night. Both parents developed a close working relationship with Akil's care team and were able to discuss any issues they discovered.

For example, when it became clear that Akil could no longer tolerate his feeding tubes, his parents collaborated with Akil's nutritionist and doctors to experiment with feeding him tiny portions by mouth. When Akil complained of pain from his medications, his doctors adjusted the dosage to a level that was gentler, yet still effective.

“From those changes, we saw almost immediate positive results.”

Back to home and school 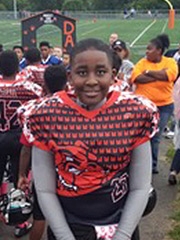 By mid-October, Akil was able to hold down small portions of food, supplemented with nutritional formula. Finally, he was able to go home.

Akil had missed so much school during the first trimester — and was still regaining his strength — so his parents decided to keep him home until the start of second term in November.

Georgia Pitsakis worked with Akil, his family, and a motility psychologist at CHOP to develop a school reintegration plan for the teen. She also worked with Akil’s school nurse and guidance counselor to create accommodations — such as being able to use the restroom at any time — when he returned to school fulltime.

Today, Akil is back in school and once again earning A’s. His favorite subject is language arts. He loves to read graphic novels and National Geographic books about animals.

As for all the time he spent in the hospital, Akil is philosophical. “I did my best and kept my faith in God,” he says. “Sometimes it’s all you can do.”