The stomach pains, nausea and hospital stays caused by Ashley’s gastroparesis meant she missed out on a lot of the fun of the first three years of high school. Thanks to treatment at the Suzi and Scott Lustgarten Center for GI Motility, Ashley’s health rebounded in time for her senior year. Now 18, she has the energy to enjoy her passions, and she’s preparing to pursue a career in occupational therapy.

Ashley first noticed problems with her digestion when she was a freshman in high school. She had trouble swallowing food, suffered from stomach pains, and experienced feelings of nausea after eating. Ashley’s problems continued to worsen over time. She was only able to eat small amounts of food, often felt sick and started to consistently lose weight.

Ashley was already seeing a cardiologist at Children’s Hospital of Philadelphia (CHOP) to monitor her for signs of heart disease, which has affected other members of her family. When her GI symptoms grew worse, she asked her cardiologist for guidance.

Ashley’s cardiologist referred her to Kristin N. Fiorino, MD, a pediatric gastroenterologist in CHOP's Suzi and Scott Lustgarten Center for GI Motility. Gastric motility is the movement of food and digested matter in the body’s gastrointestinal system. The center brings together specialists in gastroenterology, nutrition and psychology to diagnose motility problems, provide therapeutic treatment, and coordinate care for patients.

Dr. Fiorino examined Ashley and conducted tests to understand the cause of her symptoms. This included a gastric emptying exam, in which Ashley swallowed “tracer” medication with small amounts of radioactive material, which was then tracked with a camera as it moved through her digestive system. The images showed that her system was digesting food very slowly. After two hours, only 15 percent of what she had eaten had been digested, far below a normal rate.

Dr. Fiorino diagnosed Ashley with gastroparesis, a condition in which the stomach empties at a delayed rate, but the delay isn’t caused by blockage, infection, medication side effects or inflammatory disease. The cause of gastroparesis is still unknown, but it is understood to be a combined muscular and sensory problem.

Gastroparesis is a challenging disorder for pediatric gastroenterologists to treat. There is currently no standardized medical therapy for this condition, so treatment is individualized. Different combinations of dietary management, pharmacologic therapy and non-pharmacologic therapy must be tested to find the most effective treatment for patients. Dr. Fiorino started Ashley on two medications to speed up her digestive process, and another for nausea.

Ashley worked with Dr. Fiorino and other experts at CHOP, including a nutritionist, to find a combination of medications and diet that would relieve her symptoms. The Suzi and Scott Lustgarten Center for GI Motility has a multidisciplinary approach to care. In addition to seeing physicians, patients and their families are provided with additional support and resources. The support team includes dieticians, behavioral health professionals, nurses, social workers and child life specialists.

Her condition was preventing her from fully enjoying high school. Ashley’s biggest passions are singing and musical theater, but she no longer had the energy to participate in school musicals. At one point in her junior year, her gastric function was operating at just 3 percent of a normal level. She was hospitalized several times to clean out her system and supplement her nutrition. By the middle of her junior year, she had lost 23 pounds.

John Boyle, MD, joined Ashley’s medical team during this difficult time. Dr. Boyle is a pediatric gastroenterologist in the Division of Gastroenterology, Hepatology and Nutrition at CHOP. 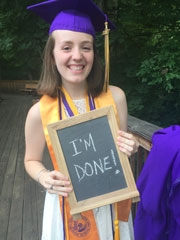 Concerned that Ashley was not getting adequate nutrition, Dr. Boyle recommended insertion of a nasojejunal (NJ) tube, a small tube that is passed through the nose and guided into the small bowel. The tube bypassed her poorly functioning stomach to deliver a special nutritional formula.

The tube helped, but made Ashley uncomfortable. After six weeks, Dr. Boyle replaced it with a G-J tube, a tube that is surgically implanted in the abdomen and runs through the stomach to feed formula into the jejunal (J) portion of the small intestine.

This proved to be the breakthrough for Ashley. She started to feel better almost immediately as her nutrition intake improved, and it is still the treatment Ashley uses today.

Over time, Ashley worked with her nutritionist to gradually increase the amount and variety of food she ate by mouth to supplement the formula fed through the G-J tube. She now eats 500 calories a day by mouth, and is gradually expanding the variety of foods she eats, including yogurt, crackers and fruit. “I get cravings for Chinese food and pizza,” she says, and she’s able to eat them in small quantities.

By her senior year, Ashley had enough energy to perform in her high school musical (All Shook Up), a highlight of her high school experience. Ashley graduated in 2017 in the top 5 percent of her class.

Ashley, now 18, continues to enjoy her passions. She currently works at a theater program for younger kids, and she’s a member of her church’s choir.

“I'd Like to be able to make a positive difference in people. To take my experience and use it to help other people. ” 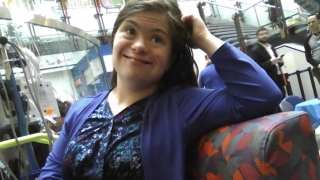