Bette Mickley refused to believe her daughter Amber had growing pains, if only for one simple reason: Amber wasn’t growing. 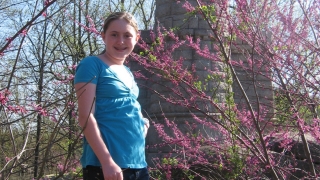 “If she was growing,” an exasperated Betty told her doctor, “we would see some change!”

And there were other symptoms: Amber was vomiting often. She had chronic pain in her arms, legs and stomach, which was distended. She seemed to bruise at the slightest touch. Through eight months of visiting doctors near their home in Gettysburg, PA, the Mickleys were given a range of possible diagnoses, from leukemia to cystic fibrosis to autoimmune disease.

Fortunately, it was none of those. But then, what was it?

Betty put Amber’s symptoms into a search engine and came up with something she had never heard of: Gaucher disease. She brought it up with Amber’s doctor.

Gaucher (go-SHAY) disease interferes with the body’s lysosomes, which act as garbage recyclers for our cells. As a result, waste products build up in the body, causing symptoms like stunted growth, painful and brittle bones, an enlarged liver and spleen, extreme fatigue and easy bleeding.

After a liver biopsy confirmed Amber had Gaucher disease, her doctor referred her to Can Ficicioglu, MD, PhD, at The Children’s Hospital of Philadelphia’s Lysosomal Disease Center, part of the Metabolic Disease Program. Even though CHOP is more than three hours away by car, the Mickleys wanted Amber to be in the hands of an expert.

Ficicioglu and his team performed genetic tests to confirm that Amber has type 1 Gaucher disease. Although most common in Ashkenazi Jews, Gaucher disease can happen to people of any ethnicity. Fortunately the disease is treatable with enzyme replacement therapy, but any bone damage done before starting treatment will be permanent, so time is of the essence.

“I was more relieved knowing the diagnosis than not knowing,” says Betty. “Dr. Ficicioglu was very thorough, telling us what was going to happen and answering our questions. He has just been fabulous. I’ve learned that if he isn’t nervous, I shouldn’t be either.”

Amber began enzyme replacement therapy twice a month. For the first four to five months, her family made the drive to Philadelphia so Amber could be monitored. She responded well, and now gets her enzyme infusions at home with a visiting nurse, seeing Ficicioglu only for twice-annual checkups.

“She takes her IV pole around the house, and then as soon as the treatment is over, she’s out the door running,” says Betty.

Moving forward with her life

Amber is now, in her words, “101 pounds precisely.” She recently celebrated her 12th birthday and will soon be able to return to playing softball and tennis, things she had to give up after her diagnosis.

Though she will have to continue the infusions throughout her life, she can look forward to a completely normal life. Amber’s days of constant illness are behind her.

What’s it like to live with Gaucher disease? Thanks to her treatment plan, Amber now has a casual answer. “It’s not bad,” she says.