At the age of 2, Steven Huang’s belly started growing bigger and bigger. His nose bled constantly.

When he was not exhausted, he would stumble around and fall as if he was drunk.

The local doctor in his native Fuzhou, China, couldn’t make a diagnosis but wanted to remove Steven’s spleen. From her home in Phoenixville, PA, Steven’s aunt, Diana Huang, shook her head. This was not right.

She flew to China and took Steven to a hospital in Hong Kong, where she first heard the words: Gaucher disease. 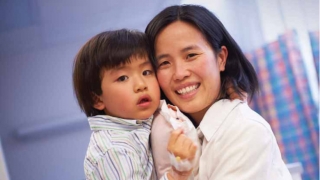 Gaucher (pronounced “go-SHAY”) is a rare genetic disease that affects the lysosomes, the cells’ garbage recyclers. Gaucher causes an enzyme deficiency that blocks the lysosomes from working properly, leading to symptoms like painful and brittle bones, enlarged liver and spleen, extreme fatigue and easy bleeding.

Since 1991, the disease has been treatable with regular enzyme replacement therapy — which can prevent nearly all symptoms if taken before permanent bone damage sets in — but the medication is not readily available in much of Asia.

Steven’s mother and grandmother both had been recently diagnosed with cancer, and his grandfather had passed away. With nobody healthy to care for Steven, Diana had already begun the process to adopt her nephew, whom she had met only twice.

Now, this diagnosis brought added urgency. In America, Steven could get medical treatment.

Diana spent eight months running Steven all over Asia — to Taiwan, to South Korea … wherever she could locate the enzyme, which cost the family $10,000 a month.

It was a relief when Diana learned that 45 minutes from her home, the Lysosomal Disease Center at The Children’s Hospital of Philadelphia offers one of the nation’s strongest programs to treat Gaucher disease. In fact, as the only program in the region, it treats both children and adults.

After 22 months, the adoption became official, and on July 27, 2011, Steven and his aunt arrived in the U.S. Five days later, he had his first appointment at CHOP.

Until he could be covered by Diana’s health insurance, Genzyme donated his medication. Genzyme has also been a great supporter of the Lysosomal Disease Center and Kaplan’s team, physicians Jaya Ganesh, MBBS, MD, and Can Ficicioglu, MD, PhD, and genetic counselors Kristi Fitzgerald, MS, CGC, Sara Chadwick, MS, MPH, and Colleen Clarke, MS.

The company has given more than $2 million to support education, research and fellowships on metabolic disease at CHOP.

Over the next five months, Steven had more than 40 appointments at CHOP and received enzyme infusions every two weeks. He has responded beautifully. Steven’s spleen has reduced in size by half, his nose rarely bleeds and he can walk without falling. He has grown several inches and his bone density is improving.

Unfortunately, Steven has type 3 Gaucher disease, a less common but more severe form that could damage his brain.

It is a devastating problem that could show up at any age — or never. So far, he shows no neurologic problems and has wowed Kaplan with his intellect. After three months in the U.S., Steven completely switched to speaking English; within eight months — at the age of 4 — he began to read.

Kaplan hopes that a new medication with molecules small enough to reach the brain, currently in trials at Genzyme, will become available before Steven shows neurologic problems.

The doctor smiles warmly as she looks over at Diana and her nephew playing. “She’s so good with him. His progress is really amazing.”

On a recent call to his mother in China, Steven even offered advice. “He picked up the phone and shouted, ‘Fight cancer!’” Diana says, laughing. “My sister knows her son is in good care now, and it lets her focus on her health.

“I’m so glad CHOP is taking care of him now. He is doing so well and growing up so fast.”