When Giovanna Eisenstein was 5 years old, her weight was already beginning to outpace her height. Because her body mass index (BMI) was slightly higher than it should have been, her pediatrician recommended keeping an eye on her eating habits and activity levels.

A year later, when her BMI was still slightly high for her age, Giovanna’s pediatrician recommended the Healthy Weight Program at The Children’s Hospital of Philadelphia.

“Our pediatrician said ‘CHOP’s program is great, you should check it out,’” says Giovanna’s mom, Sarah Eisenstein.  “She told us it was where we needed to be.”

The family’s first appointment was three hours long. “It was very informative and we had great conversations with several members of the Healthy Weight team about Gigi and how we could help keep her weight gain under control,” recalls Sarah.

Learning how to incorporate healthier habits into the family’s daily life was the first step for Gigi, Sarah, her husband, Leo, and their older daughter, Isabella. While educating parents and children about healthy eating and exercise is a key focus of the Healthy Weight Program, it was especially important for the Eisensteins. 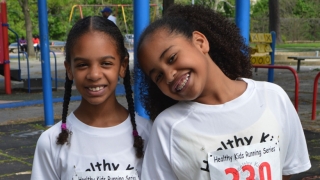 “I’m a runner and my husband is a yoga instructor, and we’ve never really thought much about what we eat because we’re active,” says Sarah. “Both of our daughters, though, are adopted. And we needed help learning how to eat and fit in exercise in order to help Gigi stay healthy.”

In the three years since Gigi’s first appointment with the Healthy Weight Program, her BMI has decreased. When her team learned she wasn’t getting enough vitamin D, they helped her add foods to her diet that were rich in the nutrient. Now, she’s no longer vitamin D deficient. And though her family has learned she’s at risk for diabetes, her team monitors her blood sugar levels at each visit. So far she’s doing well and shows no signs of pre-diabetes.

So what have the Eisensteins learned and what changes have they made? Here, the family shares some important lessons they’ve picked up from the team at the Healthy Weight Program.