After spending most of her life being treated for neuroblastoma, it seemed that 18-month-old Edie had run out of options. Her family turned to CHOP, where an experimental treatment changed the course of this little girl’s life.

It was late November 2009 when Emily and Nick Gilger first realized something wasn’t right with their 5-month-old daughter, Edie. “She started getting real bad upset stomachs, had trouble going to the bathroom, and was real fussy all the time,” says Emily. “I kept taking her back to the pediatrician in Lynchburg, where we live, telling them that I thought something was not right. She had gone from sleeping 12 hours at night to waking up every hour screaming and crying.”

The pediatrician couldn’t find anything wrong. Then in December Edie developed jaundice. This frightening symptom led to a flurry of tests. An ultrasound revealed a tumor in her abdomen. And on December 14, 2009, Edie was diagnosed with neuroblastoma.

The year that followed was one no family could be prepared for. Emily and Nick first lived with little Edie in intensive care units in Charlottesville for 4 months, then were in and out of the hospital for another 6 months. They watched their baby complete 12 rounds of chemotherapy, and were with her through four major surgeries to remove the tumors in her stomach and chest. Despite this aggressive treatment, Edie’s cancer came back.

In March 2011, the Gilgers had a conversation with their doctors that would change the course of Edie’s life. “Our hospital in Charlottesville said to us, ‘We've pretty much done at this point what we can do,’” Emily explains. “They sent us to The Children’s Hospital of Philadelphia.”

At CHOP, the Gilgers met John Maris, MD and Yael Mossé, MD — pediatric oncologists and researchers who specialize in relapsed neuroblastoma. They first tried treating Edie with a drug called Accutane® that’s been shown to encourage immature neuroblastoma cells to stop dividing. But after three months on the drug Edie’s cancer had returned again in the same spot in her chest.

Seeing that she was not responding to proven treatments, Mossé spoke with the Gilgers about the possibility that Edie’s cancer was familial, or hereditary. “In our lab, we have been focused on the rare families where neuroblastoma is inherited,” says Mossé. “We've been studying these families for now close to two decades, and in 2008 we made the discovery that most of these families have abnormalities in the DNA of a gene known as ALK, anaplastic lymphoma kinase.”

ALK was first discovered in a pediatric form of lymphoma and has recently been found to be important in a form of non-small-cell lung cancer. An ALK-inhibiting drug called crizotinib was developed to target the gene directly. For this reason, Mossé and colleagues were able to quickly move crizotinib into an initial pediatric trial.

Edie was given a simple blood test to determine if she was one of the rare patients born with a genetic predisposition to developing neuroblastoma. Much to the family’s surprise, Edie tested positive. This also meant that her tumor was driven by an ALK-mutation. She was an excellent candidate for the Children’s Oncology Group phase 1 clinical trial of crizotinib, led by Mossé, and became one of 27 neuroblastoma patients enrolled on the trial in October 2011.

After the first 28-day cycle of the drug, Edie had scans to see if her tumor had responded to the treatment. “The scans took hours and hours and hours,” says Emily. “I remember getting that phone call from Dr. Mossé while I'm in the waiting room, and just thinking to myself something has gone horribly wrong because it was taking so much longer than normal.” It turned out that Mossé was double-, triple- and quadruple-checking Edie because she couldn’t believe what she was seeing. 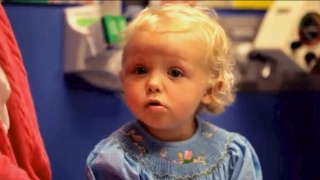 After just 28 days on this drug, having endured more than a year of intense chemotherapy and invasive surgeries, Edie was found to be cancer-free in November 2011.

She’ll continue taking this medication for the foreseeable future as doctors monitor her regularly at CHOP and at home. Edie currently has no side-effects from her treatment, and is living a normal, happy life back in Virginia.

“It's humbling,” says Mossé of being a part of Edie’s recovery. “When I first met Edie, she had no hair. She had a feeding tube because she couldn't eat using her mouth. She had developed an aversion to food. She needed blood transfusions as a result of the chemotherapy that she'd gotten. Now, here she has a full head of beautiful, blond hair. She's got a fantastic personality and is just a completely normal, healthy-appearing toddler who's dancing and singing and causing lots of trouble. It is very rewarding, and gives a lot of hope for kids who historically had very few options. We are now challenged to distinguish those patients who are likely to benefit from this therapy early on in their diagnosis.”