In October 2018, Nicholas, who was 2 at the time, became a big brother to twins Liliana and Luca. A month after their birth, Nicholas began acting strange over the course of a weekend, so on Monday morning his parents, Dana and Louis, took him to their pediatrician. She immediately sent them to the Emergency Room at Children's Hospital of Philadelphia (CHOP). 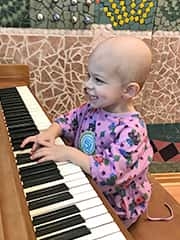 After multiple X-rays and MRI's, “The ER doctors sat us down that evening and told us the unimaginable: ‘Your child has cancer,’” Dana recalls. Nicholas had a very large tumor in his abdomen. The specific type of cancer turned out to be high-risk neuroblastoma, a rare and aggressive form of pediatric cancer that most commonly begins in the abdomen in the tissues of the adrenal gland. In Nicholas’ case, the cancer had also spread to lymph nodes in his neck. The tumor had grown so rapidly and was so large that his left lung had collapsed.

Smiling through every treatment step 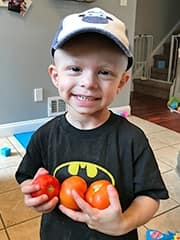 Nicholas spent the next six weeks in the hospital. “We tried to come to terms with his diagnosis while caring for our two newborn babies at home,” says Dana. She and Louis watched helplessly as Nicholas underwent treatment that she describes as “grueling”: Over 15 months, he underwent chemotherapy, a stem cell transplant, radiation, immunotherapy and a six-hour surgery to remove the tumor. “He fought through every step of treatment with a smile on his face,” Dana says.

In total, Nicholas spent more than 100 days at CHOP, and his favorite way to pass the time when in his bed was to stare out the window watching the construction of a building across the street. “It may seem strange,” says Dana, “but construction kept Nicholas going throughout his treatment. He also learned to walk again at one point by roaming the hospital hallways with his play hammer and hammering all the nails he could find.” 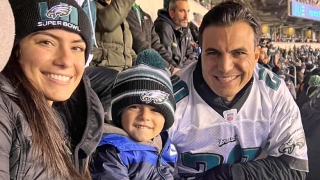 Nicholas attends a Philadelphia Eagles game as the official Gameday MVP. Nicholas finished treatment in January 2020 and has been in remission since. “It was certainly interesting trying to return to ‘normal’ life just as a pandemic arrived,” says Dana. Nicholas is attending pre-K this year, recently started playing soccer and learned how to ride a bike, just like any other 5-year-old boy. “Most people would never know by looking at him the incredible hardships he conquered during his toddler years,” says Dana, “and we are so grateful for that.”