Kyle, 12, loves playing sports. Soccer, baseball, basketball, football — he plays them all. He was at a soccer tournament in spring 2016 when his mother, Laura, found a grape-sized lump in his upper thigh as she was helping him stretch. 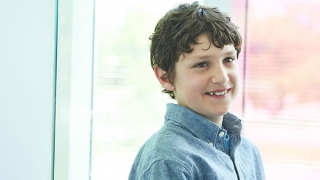 “He had noticed it,” says his father, Steve, “but didn’t say anything.”

A pediatrician friend suggested seeing an orthopaedist. A subsequent ultrasound didn’t show anything, and an MRI was inconclusive. Still, in search of an explanation, the family traveled from their home in northern New Jersey to Children’s Hospital of Philadelphia (CHOP). The results of a biopsy came back on June 8 with a dreaded diagnosis: Hodgkin lymphoma, a cancer of the lymph system.

While receiving treatment at CHOP’s Specialty Care & Surgery Center in Voorhees, NJ, Oncologist Nicholas Evageliou, MD, reassured the family. “Dr. Nick told us, ‘If you have to have cancer, this is the kind you’d choose,’” Steve recalls.

Kyle hadn’t had any symptoms leading up to the diagnosis, his family said. Dr. Evageliou “asked Kyle at least 20 questions about his health, and every answer was ‘no,’” says Steve.

Even better news was the fact that Kyle’s particular form of Hodgkin lymphoma responds well to treatment.

The last day of fifth grade was Kyle’s first day of treatment. It was the beginning of what Steve describes as a “surreal summer.” What was supposed to be nine weeks of chemotherapy, turned into 11 weeks. “He wasn’t smiling during chemo,” notes his sister, Ella, 10, “but he was tough.”

“He’d go for treatment on Wednesday,” says Steve, “and Thursday was rough, but by the weekend he’d be fine and active.”

Kyle’s friends would come along to his appointments at the CHOP Oncology Outpatient Clinic in Voorhees, and they’d play games together on the Xbox.

Kyle didn’t want any fanfare about his condition, but once he started losing his hair, friends and teammates offered to shave their heads or cut their hair in solidarity and to raise funds for cancer care and research at Children’s Hospital of Philadelphia.

Eighty kids participated in one local event, including some who sent in videos. “We raised $1,400 that day,” notes Steve.

Friends of Kyle’s family went another step further and organized a KanJam event that raised tens of thousands of dollars for CHOP’s Oncology Clinic in Voorhees, NJ.

Even Kyle’s sister got in on the fundraising action — though her efforts ran into an unexpected weather-related snag. “I had a hot chocolate stand in February — that weird time in February when it was almost 90 degrees,” Ella says with a laugh. “Only a couple of people bought it.”

Back to school and sports

At the end of the summer — during Kyle’s final week of chemotherapy — he attended soccer training camp. “And the first day of school, he was there,” says Steve, with clear admiration of his son’s determination.

After chemotherapy, doctors determined Kyle didn’t need radiation therapy. And so, Kyle “powered back in” to sports, his father says. Today, sports again play a central role in his teen life.