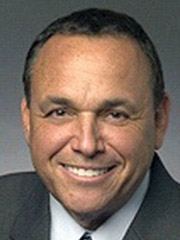 Joel and Stephanie Markel were on a mission to find the best medical care for their son Ryan. Their journey, in 1990, led them to The Children’s Hospital of Philadelphia.

“We went from hospital to hospital, and it wasn’t until we got to CHOP that I realized how good care can be,” Markel says.

“The difference between Children’s Hospital and the others was that CHOP knew how to care for the entire family. The help we got from CHOP is something my wife, Stephanie, and I will never forget.”

Even though Ryan Markel died of liver cancer while at Children’s Hospital, Markel wanted to show his gratitude for the care the Markels — all of them — received at CHOP.

He approached his son’s primary physicians, Mark Magnusson, MD, PhD, and Ken Ginsberg, MD. They described a new outreach program where CHOP physicians and nurses volunteered to go to a West Philadelphia homeless shelter and give children living there check-ups.

Would Markel and Stephanie want to support the fledgling program?

“The most important thing for us was to just say thank you to Mark and Ken for how we were treated at CHOP,” Markel says. “They thought this would be a good use of our donation, and we went along.”

A 'thank you' that continues to grow

Their initial $5,000 donation to the Ryan Markel Memorial Fund was the first gift in support of what became the Homeless Health Initiative (HHI). The Markels renewed their donation the next year, and the next, and then increased their giving.

“I’m so glad we could help,” he says. “We didn’t want it to be a one-time donation and end there.”

HHI program director Karen Hudson, MSW, LSW, says, “Joel and Stephanie were our first supporters. Their gifts have grown over the years and have allowed HHI to grow as well. We are so grateful for all they’ve done for HHI. Their reason for giving inspires us to give even more of ourselves."

Markel also connects his business success to his family’s experience at CHOP. He describes 1990 as a “Book of Job time.” His sister and brother-in-law both died of cancer, leaving two sons whom he and his wife raised. His father-in-law was killed in a car accident three weeks before Ryan died.

Markel paused to reconsider his own life, to reflect on what it meant to be a family in need. He founded Preferred Home Health Care & Nursing Services, which has grown to 10 offices and 105 main office employees and hundreds more in the field in the New Jersey/Philadelphia area.

“Born out of that time is the company that now exists,” Markel says. “The decision of what I’ve done with my life is a result of what we went through.”

Sharing the HHI mission and helping even more

A couple of years ago, Markel was invited to a meeting with the HHI team and encouraged to bring along others from Preferred. When Jonathan Herman, chief operating officer, and Stephanie Kulak, BSN, RN, clinical director of Preferred’s Bala Cynwyd office, heard about HHI, both were “smitten by what services they heard HHI provided,” Markel remembers. “They went back to the company and asked if others were interested in helping.”

Thanks to Kulak’s dedicated coordination, Preferred employees volunteer weekly as tutors and mentors to children at Jane Addams; they have also helped with the shelter’s Bully Prevention Program. Preferred volunteers also rallied to donate 30 air conditioners and a new basketball hoop and backboard to support families in the 2012 summer heat wave.

“The employees come back from visiting Jane Addams and tell me how thankful they are to HHI for giving them the opportunity to help,” Markel says. “Preferred Health Care will continue to be active — both financially and activity-wise — with HHI for a long time.

“I feel like each time I contribute a dollar, I know it’s for the good of HHI,” Markel says, “and it continues to be a thank you to Mark Magnusson and Ken Ginsburg and CHOP for the help they provided my family when we really needed it.”