As a toddler, Kayla was a “girly girl,” say her parents, Derrick and Lauren Romaelle. “She liked ladybugs, dolls and lip gloss and was sweet to everybody,” says Lauren. “We’ve had five kids now, and we know how sweet and special she truly was! 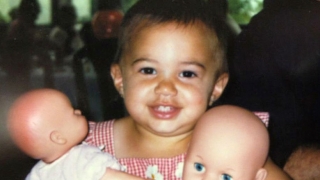 Although Kayla seemed healthy overall, Lauren, a registered nurse, became alarmed when Kayla started dragging her left leg. The family took her to Children's Hospital of Philadelphia (CHOP) the next day. “I thought Kayla might have had a bilateral ear infection,” Lauren says.

Since Kayla had never experienced headaches or vomiting, the diagnosis was shocking: Kayla had a primitive neuroectodermal tumor (PNET), a highly malignant tumor of the nervous system. Her chances of survival were 10 percent. The little patient never complained, as doctors and nurses did everything they could to save her life. But Kayla’s cancer was resistant to chemotherapy, and she was too young to be a candidate for radiation.

Tragically, Kayla Romaelle died at the age of 2 on July 3, 2000, less than four months after the PNET was discovered.

Throughout Kayla’s treatment, Lauren and Derrick, both licensed healthcare professionals, were impressed with the excellent care she received at CHOP. In fact, they expressed that it was not just Kayla receiving the extraordinary care — everyone in their family who came into contact with doctors, nurses, child life staff and other CHOP team members felt special.

Right away, Derrick and Lauren knew they had to do something to honor their little girl’s life, and they wanted it to benefit CHOP, so they began to raise and donate funds through events like an annual golf tournament. They want current and future children battling pediatric brain tumors to have better outcomes than Kayla’s, so that no parent experiences the pain and loss they did.

The proceeds from the golf tournament have supported proof-of-concept research for brain tumor treatments. Since the National Institutes of Health funds only mature studies, researchers rely heavily on philanthropy to back the early stages of their work. Further, funding for pediatric disease research significantly lags behind that of adult diseases. Philanthropic giving is crucial to finding new therapies and cures for children.

Before the inaugural event back in 2001, the Romaelle family set the ambitious goal to raise $1 million. The Romaelles were warned that, for the first few years, fundraisers like golf tournaments can cost more money than they raise. However, they would not let themselves be deterred.

“We fundamentally believed that we could build a unique fundraising model that would afford us the opportunity to begin donating after our first event,” says Derrick. Their first event raised $30,000 for CHOP, and subsequent golf tournaments have averaged a net of $65,000.

From tragedy to triumph

Derrick and Lauren recognize that organizing the event and sharing Kayla’s story has been therapeutic for them and their family. In addition to supporting research, they want their four surviving children to see that tragedy can be turned to triumph.

“It’s a lot of work, but it feels good because Kayla’s life and legacy are living on,” says Lauren. “With the fundraising, we are taking care of our child in a different way, since we can’t take care of her physically.”

After 17 years without Kayla — but with the love, support and generosity of a growing community — Derrick and Lauren's efforts have raised more than $1 million for brain tumor research at Children’s Hospital of Philadelphia.