Most of us probably can’t remember our first movie theatre popcorn. But it was one of the highlights of the past year for 17-year-old Danielle. Born with severe IgE-mediated food allergies, the mass-produced popcorn used to be too risky for Danielle to eat because of possible cross-contamination. 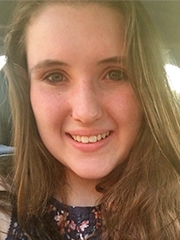 Thanks to cutting-edge treatment and multiple food desensitization studies at Children's Hospital of Philadelphia (CHOP), Danielle's previously life-threatening food allergies have been significantly reduced. Today, she's able to enjoy eating out with friends and being a typical teen.

Danielle was always an “allergic kid” according to her mom, Nancy. At just 6 weeks old, Danielle had head-to-toe eczema — the family's first clue there was an autoimmune issue at work. But Danielle was otherwise healthy, and Nancy had no reason to worry about her daughter’s future until a grocery shopping trip the pair took when Danielle was 10 months old.

In the few moments it took Nancy to choose a few apples, Danielle began to have a serious reaction. “Her eyes were swollen and tearing, she was mucousy; it was very obvious she was having a reaction to something," Nancy says. "We realized there was something seriously wrong and went to CHOP for a full allergy workup,” Nancy says.

The family chose CHOP based on its reputation for world-class care, treatment and advice. “That was always where I wanted my kid to be,” says Nancy. “And her pediatrician was very pro-CHOP.”

“As the severity of her allergies became clear, we knew that if anyone could give us hope, it would be CHOP.”

Initial tests done at CHOP showed Danielle had allergies to milk, eggs, peanuts, tree nuts, fish and shellfish. At the time, there were few treatments beyond epinephrine for acute reactions and avoiding food triggers. So, the family did what they could to create a safe space at home for Danielle.

Nancy replaced all the family's cookware and banned all allergy-triggering foods from the home. “I knew I couldn’t control what was outside. But in our home, I could give her the sense of security that she didn’t have to worry about touching something and having a reaction,” Nancy says.

The family even bought a recreational vehicle (RV) for summer vacations so they could bring an allergen-free kitchen with them.

The search for better options

When Danielle was 4 years old, she began oral food challenges with Terri F. Brown-Whitehorn, MD, an attending physician in CHOP's Food Allergy Center and Division of Allergy and Immunology.

Previous blood- and skin-based allergy tests had identified which foods Danielle was allergic to, but since some children outgrow their food allergies before testing turns negative, Dr. Brown-Whitehorn recommended that the preschooler undergo food challenges. Unfortunately, Danielle had allergic reactions during food challenge testing for milk, eggs and peanuts.

The food challenges were hard on everyone: unpleasant for Danielle when she had reactions, and nerve-wracking for her parents who had to watch. “It was awful driving there and not knowing what the outcome would be,” Nancy recalls. “But CHOP made us feel safe, and I knew we needed this information for her to start school.”

For some kids, food allergies become less sensitive over time. Danielle was not one of them. Every appointment ended with advice to keep avoiding her trigger foods.

As she grew older, Danielle also had to learn to inject herself with her EpiPen® in case she had a reaction when her parents weren’t around.

“I would cry after every appointment,” recalls Nancy. “There were no treatments back then. It was just ‘avoid, avoid, avoid.’ I think my husband felt hopeless and saw the despair in our eyes, and one day he asked Dr. Brown-Whitehorn, ‘Isn’t there anything else?’ That’s when she told us about a milk desensitization study CHOP was planning.”

Two years later, Danielle was the first patient enrolled in the study, run by Rushani Saltzman, MD. Danielle received tiny doses of milk — a single drop at first. Each week, she would go to CHOP for an increased dose and to be monitored in case of a reaction. Then Nancy would provide the same dose each day at home. Essentially, CHOP’s allergy specialists were using the study to “reprogram” Danielle’s immune system to have a more typical response to dairy.

After six months of gradual increases, Danielle could tolerate 8 ounces of milk. To ensure she didn’t become re-sensitized, she had to include a steady portion of dairy products in her diet every day: grilled cheese, a chocolate bar, etc.

During the next few years, Danielle was able to take part in similar studies for both eggs and peanuts.

“With each study, life got better.”

“When she entered the peanut study, we thought we hit the lottery. It was unimaginable to us she would be chosen for three studies,” Nancy says.

The egg and peanut studies were also successful and the combined effects had an enormous impact on Danielle’s day-to-day life. Over time, her less severe allergies to tree nuts and fish have cleared up as well. Now she’s been able to take part in the activities other kids take for granted: dying Easter eggs, going out for milkshakes, and generally doing what her friends do without having to worry about exposure from cross-contamination.

“Things are a lot nicer now,” Danielle says. “I’m able to have a normal life and not be so vigilant. Now, I’m down to just worrying about normal stuff.”

Danielle’s parents feel more relaxed too. “The doctors always said this was a possibility, but never in my wildest dreams did I think it would be this successful,” says Nancy.

That’s not to say all Danielle’s allergy challenges are gone. She can tolerate minimal exposure to peanuts, but still can’t eat peanut butter. She still carries an EpiPen®, and must check out new restaurants before she orders. But she’s able to do most things with little worry.

“The best thing is that I can do what I want,” Danielle says. “I want to travel abroad. I can do it now without worrying. I can go to a friend’s house and eat something off the barbeque or go out to eat after band practice and I don’t feel like I stick out.”

Nancy acknowledges it’s tough to put your child in a study like this, but in the end it was more than worth it. “We’re so lucky to have hospitals like CHOP that are doing these studies,” says Nancy. “You have to have faith in the doctors. They’ve done their research and truly want what’s best for your child.

“These studies have been all of my dreams for my kid come true,” she continues

“It has given her the life I wanted for her.” 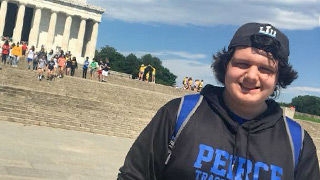 Lorenzo is back playing the games he loves, thanks to an innovative biologic treatment at CHOP.