John's food allergies were so severe that his mom trained all his friends how to use an EpiPen® in case he ever accidently consumed something with milk or peanuts in it. When John was 14, his doctor told him about a novel allergy desensitization study that could potentially treat his allergies by giving him the very foods he was allergic to. The treatment was successful — John can now eat dairy products, and has much milder reactions if exposed to nuts.

Until John ate the smallest bite of a Butterfinger® candy bar when he was 18 months old, his mom Michelle thought her son had gastrointestinal (GI) issues. His introduction to baby food was problematic — he often vomited and gagged when he ate, especially foods with dairy.

“We knew he had issues with milk, but we thought it was a GI thing,” says Michelle. But when John asked for a bite of the Butterfinger, the family discovered the real story.

“I gave him the tiniest flake of chocolate and he immediately turned bright red, broke out in hives and vomited," she says. "I grabbed him, jumped in the car and drove to the local hospital.”

Doctors diagnosed John with a peanut allergy. His family wanted to learn more: Was there treatment? Would he outgrow the allergy? What could they do to protect him from another violent reaction like he'd just had?

Seeking answers, John's family turned to the Food Allergy Center at Children's Hospital of Philadelphia (CHOP). After additional testing, the family learned John wasn't just allergic to peanuts — he had multiple IgE-mediated food allergies. John carried an allergen-specific immunoglobulin E (IgE) in his bloodstream that caused him to have immediate, often violent and potentially fatal, reactions to peanuts and milk.

Living with milk and nut allergies

“It was so hard to find food for him," Michelle says. "I had to go to the food store and stand there for hours and read the labels. I’d go through so many ingredients and get to milk and start crying. He could barely have anything when he was little.”

Because of the potential for cross-contamination with cold cuts and cheese cut on the same machines, Michelle devoted a lot of her time to roasting meat and poultry and preparing safe foods for John to take to school.

“In elementary school, I always had to pack a lunch," John remembers. "One week mom would make roast beef and I’d have roast beef sandwiches all week.”

John's dairy allergy became the most problematic for him and his family; as many foods contain milk and the risk of cross contamination is very high. Just one bite of the wrong brand of hot dog buns could send him to the hospital.

John got used to eating meals prepared at home, rarely eating out, and toting a backpack with his medications and EpiPen everywhere he went. Still, some things were challenging for him.

“The most frustrating thing was when my friends would order pizza or go out somewhere to eat and I’d have to bring my own stuff,” says John, now 17. “Also, it was embarrassing when my mom made all my friends come over and practice using the EpiPen.”

When John was in the eighth grade, his physician, Terri F. Brown-Whitehorn, MD, told him and his family about a potentially breakthrough allergy treatment being studied at CHOP to help desensitize children to their allergies. The goal of the treatment is to alter the child’s immune system, acclimate it to the allergens, and eventually eliminate the allergy altogether.

As a national leader in in food desensitization studies, CHOP is uniquely positioned to help children with IgE-mediated allergies. The hospital has multiple active studies involving milk, egg and peanut allergies, many of which have been successful in eliminating or reducing allergies in children.

John and his family agreed to participate in the allergy desensitization study. "It was rigorous, but well worth it," Michelle says.

At the outset, John underwent full days of food challenges, where he was fed small doses of milk and peanuts and monitored for his reaction. Then, the desensitization process began. John received his allergens in the form of a powder, which he mixed into foods like applesauce and soy pudding. Every two weeks the dosage (amount of powder) would increase.

“We called it ‘The Dose,’ and we gave it to him every night," Michelle says. "He had to be absolutely still for two hours after he took it. No running around or hot showers. Any change in his body temperature could trigger an allergic reaction.”

“It was hard,” John remembers. “The powder was a mix of milk and peanuts, and I hated the smell and taste of peanuts, so it was always hard to find something to mix into it that would mask the taste and smell. Most of the time I had to hold my nose to get it down.”

But after nine months of holding his nose, John was cleared to eat milk and peanuts, and he finally got to do something he'd only dreamed of before — go out for pizza.

The experience was so liberating for John and his family, that John continued the desensitization process by eating a food with a dairy ingredient every day. It wasn’t hard for a boy who'd just learned how delicious nacho cheese-flavored chips and cheesesteaks were! But John had a harder time trying to stomach the daily requirement of two peanut M&M’s®.

“He told me, ‘I don’t care if I never have a peanut or peanut butter again in my life,” Michelle says. After three months of fighting to get the two peanuts down each day, his family decided to let it go.

“It was getting harder and harder to get him to eat it,” Michelle adds. “We decided we weren’t going to make him do it, and he knew he would have to continue to carry his EpiPen with him every day if he stopped.”

Even without the continued desensitization, his reaction to peanuts is much less severe. His dad is now able to eat peanuts, and the family can have peanut butter in the home.

For John, overcoming the milk allergy has changed his life completely. Gone are the days when he couldn’t go out with his friends for pizza or order chicken nugget sandwiches at the local convenience store. “It opens up such a variety," he says. Now, the only time he asks about peanuts is when he's at a restaurant and isn't sure if a dish includes peanuts or was exposed to nuts during preparation or cooking. 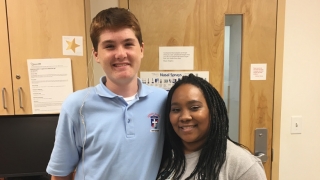 Through it all, John's family has appreciated the support and advice from the Food Allergy Center team. CHOP's Food Allergy Center has one of the largest and most accomplished teams of pediatric food allergy experts in the world, all dedicated to pioneering research that helps kids with allergies experience the world with less fear and more freedom.

“I can’t rave enough about the CHOP team," Michelle says. "Everyone on the allergy team is fantastic from Dr. Brown-Whitehorn to Pam Scott-Bey, his medical assistant. And even beyond allergy, whenever we're having an emergency and have to come to the ER, the staff is amazing."

“They care for the child — and the parents, too. We couldn't ask for better care.”