James was always a small child, a poor eater and behind the normal curve in his growth. Genetic tests when he was 2 revealed the cause — he has two rare and unrelated syndromes. James’ treatment plan was adjusted to address his unique needs, and he is now thriving. 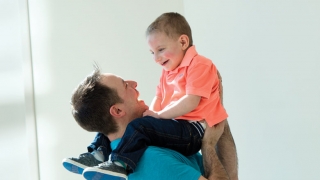 James was born in July 2013. Lauren, his mother, had an uncomplicated pregnancy, up until her 38th week, when an ultrasound showed the baby was small. She was sent to a fetal specialist, who found what appeared to be a blockage in one of his umbilical vessels. It was not causing the baby distress, but was likely affecting his growth. Labor was induced, as doctors thought that James would do better outside the womb. He arrived weighing 4 pounds, 11 ounces. Other than being small, he was healthy and passed all the newborn screenings.

But James’ first two years were a challenge. He didn’t put on weight and had problems with reflux. Lauren and James Sr., his father, spent a lot of time focusing on his growth and weight gain. Under the guidance of his pediatrician, James’ oral feeding was supplemented with a nasogastric (NG) tube, and he was put on a high-calorie formula. He had GI workup, which showed nothing abnormal. His poor growth was attributed to the reflux.

Lauren is a nurse practitioner and found it troubling that, even with her medical expertise, her son was not thriving. “It was stressful worrying about his weight and growth,” she remembers. “I felt helpless at times.”

James’ second birthday was a normal day for him. He played happily. But that night, he had a seizure. Two days later he had another. That prompted his parents to bring him to see specialists at Children’s Hospital of Philadelphia (CHOP).

James was admitted and had a complete workup that included metabolic, neurologic, GI and genetic consultations and tests.

Lauren and James Sr., met with David Bearden, MD, a neurologist, and metabolism specialists Rebecca Ganetzky, MD, and Can Ficicioglu, MD. After James had had a number of tests, they also met with Matthew Deardorff, MD, PhD, and genetic counselor Emma Bedoukian, MS, LCGC, from the Roberts Individualized Medical Genetics Center (IMGC). The IMGC facilitates access to genetic testing, and its experts explain the tests to patients and families.

“Hearing that my child needed to see a geneticist was quite a hard pill to swallow,” says Lauren, “Dr. Deardorff calmed my fears. He is extremely personable, delightful and compassionate. Just like the other doctors we had seen, he was very thorough and completely transparent with us about the potential causes of James’ symptoms.”

While it was worrisome to see James go through so many tests, Lauren felt relieved. “We could see that they felt the gravity of James’ condition. They were not dismissing our concerns. All the doctors we had seen made us feel that way,” she says.

James stayed at CHOP for three days that visit. He was put on medication to control his seizures, and both parents were trained in how to administer rescue treatment in the case of an emergency.

James then underwent two genetic tests: exome sequencing, a comprehensive test that reads the genetic code of about 20,000 genes; and SNP-based chromosomal microarray analysis, a test that looks for extra or missing portions of chromosomes. The results found that James has two rare and unrelated genetic disorders.

James has a genetic disorder called Floating-Harbor syndrome, the symptoms of which include small size and delays in speech development. It is so rare that there are only about 50 known cases in the world. James also has a late-onset metabolic disorder called argininosuccinic acid lyase (ASAL) deficiency. If left untreated, it can lead to high levels of ammonia in the blood. Symptoms can include poor appetite, vomiting and seizures, which James experienced.

ASAL deficiency is one of the conditions screened for in the required uniform newborn screening panel in New Jersey, where James was born. Largely because his newborn screening had come back negative for the condition, doctors had not considered it as a possible cause of his problems in their examinations for his first two years.

Clinicians from Metabolism and the Roberts IMGC spoke with the Centers for Disease Control and Prevention (CDC) and learned that James was the only child, ever, known to have a late-onset ASAL deficiency that did not show an abnormality on a newborn screen. After this discovery, his medical team wrote a case study about James that was published in the Journal of Inherited Metabolic Disease Reports. Lauren and James Sr., hope that broader awareness of James’ diagnostic odyssey will help other children and families.

“It was an emotionally and mentally challenging day hearing the results of James’ tests,” Lauren remembers.

“But it gave us hope. We had answers. We could finally say we understood what was happening and why. Not knowing and lacking that understanding had made us feel incredibly powerless.'”

The diagnoses from the genetic tests enabled James’ medical team to make significant improvements to his treatment plan. In retrospect, they could see that the high-calorie diet he had been prescribed as a baby had not helped him. James was put on a diet with only small amounts of protein, and now takes arginine to help him metabolize his food. His therapy regimen has also been changed with the diagnosis of Floating-Harbor syndrome. It explained the delays in his speech and motor development and helped focus therapeutic efforts. Knowing that he has a delay in processing speech has helped his parents understand and interact with him.

At 4, James is a happy little boy. “He smiles all day long,” says Lauren. “We can tell that he just feels good now. You can see it in his running, playing and smiling.”

He loves to play with anything that spins or turns. He has a drive to figure out how things work. James likes playing outside, especially when riding his Power Wheels® car. And he loves riding the bus to preschool.

James' family is also now active in raising funds for research. In July 2018, his family hosted the James’ Par for the Harbor golf tournament, raising an amazing $7,500 for the IMGC. The tournament will become an annual event.

“We are eternally grateful for the extremely bright and incredibly caring minds, hearts and souls of the Roberts IMGC team,” says Lauren. 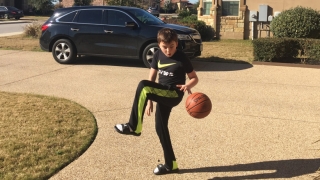 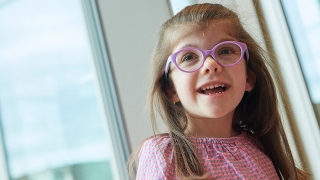 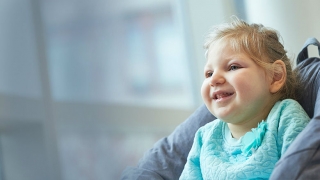