For as far back as she can remember, 18-year-old Emma has had digestive troubles. As a little girl, constipation and diarrhea gave her bellyaches, but the symptoms would disappear as quickly as they came and life would go on as normal.

That changed in second grade when Emma had a gastrointestinal (GI) virus and threw up in her classroom. Afterward, every twinge and ache in her belly terrified her. She was afraid of vomiting again and that fear made her stomach hurt even more. 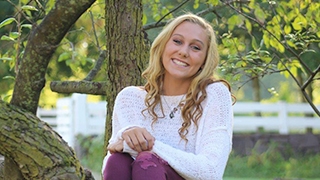 For years, Emma was caught in a repeated cycle of anxiety and gastric distress. With the help of motility experts and a psychologist at Children's Hospital of Philadelphia (CHOP), Emma was able to break the cycle. Now, she's feeling great and excited about her next challenge: college.

Powering through the pain

Emma’s parents, Darryl and Missy, are aware of the connection between mental and physical health. Missy is a pediatric nurse practitioner in the Diabetes Center and the Division of Endocrinology and Diabetes at CHOP.

The mind-body link is especially strong with GI discomfort because the colon is partly controlled by the nervous system, which responds to stress. Being afraid can literally make a person sick to their stomach, Missy says.

In elementary school, she helped her daughter overcome her anxiety by beading her a bracelet with the message, “Power Through.” Whenever Emma thought she might throw up, she'd look at the bracelet on her wrist. It worked. Emma’s GI distress stopped scaring her and, for the most part, she was able to move on.

Emma's gastrointestinal issues returned in high school. This time, the trigger was a new acne medication that made her constipation worse. When she became nauseous, her old fear of throwing up resurfaced.

That fear became debilitating. Emma missed some time in school and, at times, avoided going out with friends. She tried to control her GI symptoms by eating as little as possible, but then she'd become fatigued from lack of food — further eroding her ability to cope.

One day, Emma’s abdominal pain grew so severe that her family brought her to the Emergency Department at Children's Hospital of Philadelphia. An X-ray revealed Emma's digestive tract was filled with stool; constipation was causing her extreme pain. The results surprised her family, but made them realize Emma needed specialized care and treatment for her motility issues.

Emma's family brought her to the Division of Gastroenterology, Hepatology and Nutrition at CHOP, where a team of clinicians performed a series of cutting-edge tests at the Kohl's GI Nutrition and Diagnostic Center.

While the exact cause of IBS is unknown, one theory is that a person with the disorder has an unusually sensitive and reactive colon. Children like Emma may be more aware and bothered by GI discomfort than most. A gastric emptying test also determined Emma's body is slow to digest food, which, clinicians say, likely contributes to her constipation and discomfort. 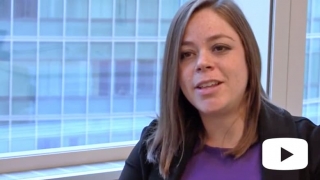 To address Emma's symptoms and the way her body digests food, Bierly encouraged the teen to eat small amounts of food throughout the day. This would serve a dual purpose: getting nutrients into her body, while not overtaxing her sensitive GI tract.

Bierly prescribed Emma laxatives, antispasmodic and anti-nausea medications to clear the teen's colon, decrease painful spasms, and calm her feelings of nausea. Emma would take the laxatives, empty her bowel and feel better — for a while. But the constipation always returned and Emma's pain-and-anxiety cycle would begin again.

Refusing to give up

Despite missing some school because of the IBS, Emma helped spearhead a successful effort to establish a girls' water polo team at her high school and was later recruited to play water polo in college. She also undertook a project to install hydration stations at the school to encourage students to drink more water and reduce plastic bottle waste.

“She’s social and ambitious," Missy says of her daughter.

“She might have anxiety about a situation, but then she’ll go back and try it again. ”

But Emma’s symptoms worsened toward the end of her senior year. Her parents attributed it to anxiety about graduating from high school and leaving home for college. It was time for Emma to address the psychological component of her IBS.

Learning to cope with IBS

Emma began seeing Kari F. Baber, PhD, a psychologist at CHOP who works with children with GI disorders. Baber helped Emma understand the link between her anxiety and her gut and taught her strategies to cope with painful symptoms and control the anxiety. She also convinced Emma of the importance of taking her medication regularly — even when she was feeling well.

“She helps me think through problems using my brain instead of my emotions,” Emma says.  By tackling both the physical and psychosocial elements of her IBS, Emma is optimistic she has broken the cycle of anxiety and gut pain.

A plan for the future 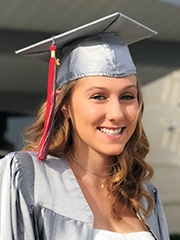 The real test will be her biggest life change yet: going away to college.

Emma’s team at CHOP created a customized treatment plan that includes boosting some of Emma’s medications; eating small, frequent and healthy meals; regular workouts with her swimming and water polo teams; and, if necessary, talking with a therapist at the campus counseling center.

“There are so many other things that I’m going to be anxious about, but I’m not anxious about my stomach now because I know what to do. I have a plan. ”