Call it a mother’s intuition. Though Killian appeared to be growing and developing normally during prenatal appointments, Jennifer couldn’t stop worrying something was wrong. 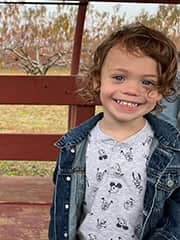 Having worked as a bedside nurse in the Newborn/Infant Intensive Care Unit (N/IICU) at Children’s Hospital of Philadelphia (CHOP) for three years, Jennifer knows all too well the health issues newborns can face after birth. After Killian was born, isolated things stuck out to her: his tongue hung out of his mouth, his skin was incredibly soft, and he had a blue spell and stopped breathing briefly after his circumcision.

The neonatologists at the hospital where Killian was born evaluated him and didn’t notice anything concerning, so he was discharged home two days after birth. Once home, Killian had feeding difficulties caused by a milk allergy and was prescribed medication for severe gastroesophageal reflux (GERD), but other than that, he was in relatively good health until his 6-month checkup.

The pediatrician noticed that Killian’s head lagged behind his body when he moved, he was unable to sit up, and he had decreased muscle tone, known as hypotonia. Killian was referred for early intervention services, including physical therapy (PT), occupational therapy (OT) and speech therapy.

The regular therapy appointments helped Killian catch up a bit. He was able to crawl by 12 months, walk by 18 months and babble. But his mother didn’t just want to treat symptoms; she wanted to know what was causing the hypotonia.

“I figured if we could find out the root cause of the hypotonia, we’d have a better chance of helping him,” says Jennifer.

Jennifer and her husband, Andrew, took Killian to CHOP to see a neurologist, a developmental pediatrician, and a geneticist. At first, the whole exome sequencing the geneticist ran came up empty. However, six months later, when Killian was 2 years old, Jennifer was notified that a genetic variant had been identified. 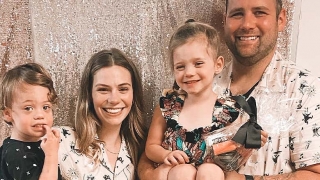 Killian was diagnosed with a genetic condition that produced a variant of the gene called inosine monophosphate dehydrogenase 2 (IMPDH2). At the time, he was one of only 16 people identified with the genetic variant. The gene is along the dopamine synthesis pathway, and it is associated with juvenile onset dystonia-tremor disorder.

Killian was referred to Nivedita Thakur, MD, Medical Director of CHOP’s Movement Disorders Program. During the appointment, Jennifer and Dr. Thakur discussed a medication that offered promise to treat Killian’s symptoms. Killian was prescribed the medication and, less than two weeks later, he was doing better than ever.

“It’s truly been like a miracle drug for him,” says Jennifer. “He is now running, paying attention, following commands and directions, eating full meals, speaking more clearly and using more words in sentences — he couldn’t do any of that before.”

Killian is now almost 3 years old. He loves animals and people, especially his older sister, Ainsley. He has two cats, one dog and six chickens. He helps his mom collect their eggs every morning.

“I feel so blessed he was given to me and that I am able to help him,” says Jennifer.

“I am so thankful for my knowledge from working at CHOP. He has come so far, and I want everyone to know. I am forever grateful for our medical team that is helping him achieve the impossible.”