Joey Nolan passed away before his first birthday. During that journey, his parents found support from bereavement and palliative care specialists at CHOP, who along with child life specialists and others, helped both them and their other children prepare to say goodbye. Joeylynn Nolan, Joey’s mother, shares their family’s experience in her own words. 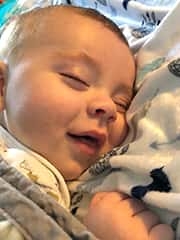 Joseph John Nolan was born a few weeks early, but came out kicking and screaming. It was love at first sight.

The first night after he was born, Joey did a strange eye roll in his sleep. We questioned it, and we were reassured it was nothing. Around 6 to 8 weeks of age, we noticed a very unusual screaming seizure, but were told it was probably just gas and reflux. Then came abnormal eye movements, which brought us to the Division of Neurology at Children’s Hospital of Philadelphia (CHOP).

Soon after, Joey had his first tonic clonic seizure (what used to be called grand mal seizures). It ended up a rare mutation in the Tbc1d24 gene caused his severe and uncontrollable seizures. Joey’s neurologist explained that because of the severity of Joey’s case, it was likely he had less than a year to live. As his mother, I had the same gut feeling. Unfortunately, we were right. Joey died at 7 months and 3 days old due to respiratory failure from unremitting seizures.

Medical and emotional sides of a fatal diagnosis

I’m a respiratory therapist at CHOP and was familiar with the Pediatric Advanced Care Team (PACT), a service that provides palliative care to children and their families. Besides the medical side of Joey’s care, my husband, Ed, and I also wanted to focus on Joey’s quality of life and prepare how to talk to our two other children — Lola was 5 and Eddie was 3 at the time — about Joey’s medical status.

PACT has professionals both from the medical and psychosocial side of a patient’s care. The medical service was a support to us as parents during difficult times with decision-making. The psychosocial service helped our whole family process our feelings before and after his death and helped to create precious legacy keepsakes. 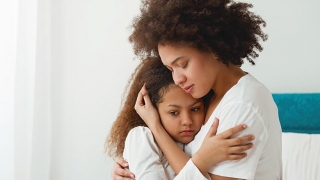 When a loved one dies, children may need help grieving. Here’s how to guide them.

We wanted Lola and Eddie to be as prepared as possible, and we wanted to be completely honest with them — and we were, other than shielding them from some of Joey’s big seizures. PACT child life specialist Kelly Goldin gave us the language and concrete terms to use so that they understood. While, as parents, we may have a tendency to sugarcoat things to protect their feelings, Kelly taught us that it’s OK — and creates less confusion — to explain things in a matter-of-fact way. 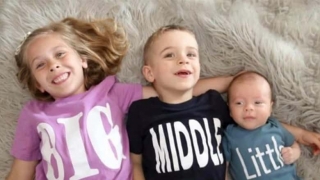 Telling Lola and Eddie their brother had died was the second hardest moment of our lives. As parents, you feel your children’s pain. It was really difficult because we had so much of our own heartache, then we piled theirs on top of ours.

Lola shows her pain through tears, and Eddie shows his through frustration and anger. We talk to them in those moments and do our best to just “sit with it,” instead of trying to make it better.

Initially, they coped by talking about Joey and their feelings during art therapy with PACT art therapist Jen Lemisch. They also gave us books that made grief understandable for children. We still read them today, and the kids ask for them specifically.

Kelly helped Lola and Eddie make and decorate frames for their favorite photos of Joey that were displayed at the funeral service. Jen came to our home biweekly, working with them to make memory boxes, ornaments and special mosaic tiles for our “Joey tree” in back of our house.

We picked this tree as a place for remembering special times in Joey’s life, like his birthday and anniversary. We decorate the tree for him in purple lights — purple is connected to epilepsy — and hang memorial chimes and plaques on it. We also sit on the bench and talk to him.

At Christmas, we have a special Joey tree, too.

Always a part of our family 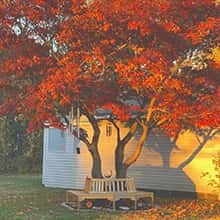 With the help of PACT, Lola and Eddie have the language to talk about Joey. If one of their classmates were to lose a sibling, I think they would honestly say, “Our brother died, too.” They bring it up to their friends in a very natural way. I think sometimes people are shocked by that. As a family, we talk about Joey all the time. He is still very much a part of our family.

We miss Joey. We know he’s better where he is now, but the guilt of not being able to fix his illness will always hurt. He wasn’t given a fair chance at life, and that will always make me angry in a way.

I cope by writing and reading. I also did therapy with Elizabeth Spellman, PACT’s bereavement and palliative care social worker, for more than a year, which I credit to really helping me get through the hard parts. I had so much internal guilt and confusion, talking through it got me to a much better place.

I and Ed cope by continuing to remember Joey, and we both still talk to him daily.

Advice to friends and family

We like it when people talk about Joey. We don’t want to be tip-toed around. We understand that losing a child is everyone’s worst nightmare, but when you’re in it, you need support.

For anyone finding themselves in the position of supporting a family that has lost a child, don’t look away. Send a card or a text on an anniversary or birthday. Keep the loved one in conversation throughout the year. We just want the opportunity to keep talking about them without making people uncomfortable. We’re so grateful for our friends and family for being an incredible support to us.

For families who have lost a child, I would say that this grief is forever. It ebbs and flows and changes all the time. But it is forever. Don’t fight it; just accept it. Hard days knock the wind out of you. Let them. Eventually, the sharp pain will dull a bit and your life will become manageable again.

The bad news is that it’s a daily effort. The good news is that, because you now know extreme deep pain, you will also be born into a world where you can feel joy more deeply than you may have previously.

I have learned that I’m more adaptable than I ever knew I could be. And I learned I’m a very lucky person to have had the opportunity to love Joey. I do my best to spread love in small ways daily because we are all struggling, and we can all use a little more support.

Smiles through the tears

All the sadness and sickness aside, Joey was remarkable. His soul was beautiful, and his kiss was the sweetest. He definitely brought out the best in me, and in all who love him.

Working with the incredible people in PACT, we learned how to work through our grief and draw out the positive aspects of this heartbreaking experience of losing a child and a brother.

We would do it all over again just to know Joey, love him and spend time in his magical presence. These kids are truly so special.

Our Joseph John was an angel on earth, and we were privileged to be his parents.