Ruby isn't your typical college basketball player. For one thing, she's 4'7". She's also in a wheelchair. But, after a lifetime of overcoming obstacles in her own life due to cancer, Ruby relishes the challenges on the court. Whether it's passing, shooting or playing lockdown defense, Ruby continues to defy the odds. She has the heart – and skills – of a champion. 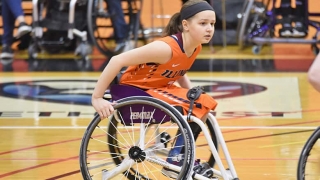 Now 18, Ruby is a freshman at the University of Illinois Urbana-Champaign, where she was recruited to play wheelchair basketball at the university's Paralympic training site.

"Wheelchair basketball is a big part of my life," Ruby says. "It's a chance to be part of something that a lot of other athletes are doing – even if it's in a slightly different way. It's also given me a door into the disability community. Having that shared identity is incredibly valuable."

Ruby doesn't remember much about her early cancer diagnosis or treatment. She was only 4 months old when she was initially diagnosed with neuroblastoma, and 3 years old when she relapsed. Her parents, however, have vivid recollections of how scared they were – and are thankful they are that Ruby has come so far.

"Ruby's strength and resilience have always been impressive," says her dad, David. "We've learned to never rule anything out for her."

Neuroblastoma is a nerve tissue tumor found in infants and children.

Ruby was only a few months old when a series of seemingly unrelated symptoms – sweating profusely, abdominal pain, bowel issues and paralysis in her legs – led her parents to a Maryland hospital near the family's home. Parents David and Sara were shocked to learn Ruby had neuroblastoma, a tumor that had crushed the lower part of her spine, leaving her paralyzed from the belly button down.

Surgeons removed the bulk of the tumor, but could not remove it all. That left Ruby at higher risk of complications and relapse, so she and her family came to Children's Hospital of Philadelphia (CHOP) for a second opinion and follow-up care.

For more than two years, pediatric oncologist John M. Maris, MD, and CHOP's Cancer Center monitored Ruby's condition. When she was 3 years old, her cancer returned. This time, she was diagnosed with stage 4 neuroblastoma – the most serious and potentially deadly form of cancer in children. She had a solid tumor between her heart and spine, and cancerous cells filled more than 99 percent of her bone marrow.

Treatment would be complex and multi-layered. Pediatric oncologists at CHOP recommended a then-new treatment protocol that combined five rounds chemotherapy with surgery, two stem-cell transplants and 6 months of biological therapy. Ruby's parents agreed and for the next 15 months, traveled back and forth from Baltimore to CHOP for treatment. Ruby spent more than 130 days in the hospital, with her entire treatment course taking more than 450 days.

Treatment was hard for Ruby, but her family reassured her. Her dad frequently shared radiological scans with her so she could see her tumor was shrinking. Ruby, then 4 and wise beyond her years, told her dad, "Treatment sucks, but as long as it's working …"

After successful treatment and when doctors determined Ruby had "no evidence of disease," she continued to receive follow-up care from specialists at CHOP. She was referred to CHOP's Endocrine Late Effects after Cancer Therapy (ELECT) Program.

"After Ruby was feeling better and cancer-free, our CHOP life became one of specialists – endocrinology, urology, cardiology, orthopaedics, pulmonology, dermatology," David says. "Unfortunately, cancer treatment can often cause lingering issues with other body systems. This was certainly true for Ruby."

Ruby's most complex long-term issues were endocrine and growth related. She was diagnosed with growth hormone deficiency, hypothyroidism and delayed puberty, and was referred for care to Sogol Mostouf-Moab, MD, MSCE, a dual-certified pediatric oncologist and endocrinologist with clinical expertise in endocrine late effects in childhood cancer survivors. Under Dr. Mostouf-Moab's care, Ruby started therapy to address some of these complex late effects of her high-risk neuroblastoma treatment.

Ruby credits Dr. Mostouf-Moab and Jill P. Ginsberg, MD, director of the Childhood Cancer Survivorship Program at CHOP, with helping her feel more empowered about making her own healthcare decisions – especially as she entered her late teens.

"I still want my doctors' and parents' advice, but ultimately the decisions about my own healthcare are mine to make," Ruby says. "Having that independence and responsibility is important to me." 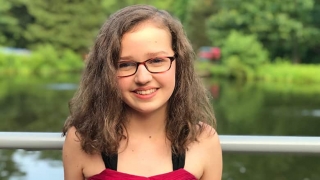 Ruby's love for basketball began in grade school when she started playing for her local adaptive sports program’s team. As her love for the game grew, she began to look for ways to expand her skills and get more experience. The summer after 7th grade, she attended her first basketball camp at the University of Illinois. The opportunity to play with 70-plus athletes from across the country and learn from Illinois student-athletes and coaches brought her back every summer that followed. During her junior year of high school, Ruby got a call from Illinois Coach Stephanie Wheeler.

"I love basketball," Ruby says. "The strategy, the moves, figuring out how I can best help my team. My wheelchair is just part of me – and everyone else on the court. It's an amazing experience to be able to compete at such a high level."

For now, Ruby is focused on college and basketball. She wants to finish school, stay involved in sports, and ultimately strike out on her own and find a way to make a difference for others with disabilities.

"I have goals for my life and I'm happy with where I am today," Ruby says.

“To some people it may be funny to think, but my cancer and paralysis made me who I am, and I’ll always be grateful to everyone at CHOP who has helped me get on the path to reaching those goals.”