Jaiden loves playing basketball and never missed a practice, let alone a game. So in January 2016 when he declared he wasn’t up for playing in that afternoon’s matchup, his mother, Felicia, knew something was very wrong.

Jaiden, 9, had been having fevers and headaches off and on for a few weeks. After he spent a night breathing so heavily and rapidly that Felicia became alarmed, she took him to his pediatrician, who immediately sent him to The Children's Hospital of Philadelphia’s Care Network location at Virtua in Voorhees, NJ. A chest X-ray revealed a 9.8-centimeter mass on his lung that was touching his heart. The diagnosis: T-cell lymphoblastic lymphoma. Jaiden was quickly sent to CHOP’s Main Hospital.

Ask him what he likes to do, and Jaiden reels off a litany of high-energy activities: basketball, football, swimming, rollerblading and riding his bike. After his diagnosis, sports were unfortunately off limits. “It’s put a damper on things,” Felicia says. Jaiden has been spending his time hanging out with friends and family, watching wrestling on television with his father and grandfather, and playing Xbox. “And I’m really good at math!” he declares. 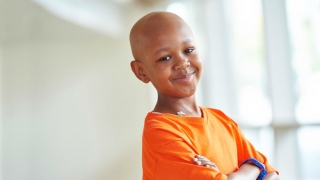 For his outpatient treatment, Jaiden went to CHOP’s Specialty Care and Surgery Center in Voorhees, NJ, close to his home in Mount Laurel. He and his mom became particularly fond of the nurses and his social worker there. “She has been very supportive emotionally as well as assisting me in getting financial support through various organizations during my family leave from work,” Felicia says. She smiles when describing Jaiden’s experience at CHOP. “He seems to have made an impression on all the staff. Once, when Jaiden’s bloodwork numbers were too low to proceed with a scheduled inpatient stay, the nurses said, “Oh no! We were looking forward to seeing him!”

Jaiden should be finished with chemotherapy in September 2016, and then he’ll go on to once-a-month maintenance treatments. “He’s been such a trooper through it, even through the treatment’s side effects,” Felicia says with pride.

He’ll celebrate the end of chemotherapy with friends and family at the Parkway Run & Walk on Sunday, Sept. 25. The event is the largest annual fundraiser for the Cancer Center at The Children’s Hospital of Philadelphia, and this year Jaiden is a Patient Ambassador. “We’re super-excited to participate,” says Felicia. “We want to give back to a wonderful place that has done so much for us and all the families whose lives have been touched by Children's Hospital.”