Natalia and Michael were in the second trimester of pregnancy when they learned there were some complications. Their obstetrician told them their baby girl had severe intrauterine growth restriction and wasn’t growing properly. They also learned that Natalia had preeclampsia. 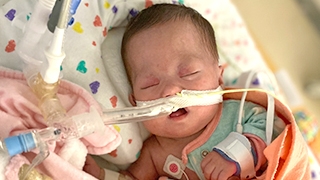 At 26 weeks’ gestation, the OB noticed the blood flow to the placenta was very sporadic. She warned the couple that the baby could be born any day, and there was a good chance she wouldn’t survive. Natalia was admitted to the hospital near her home in Monroe Township, N.J. The goal was to keep her on bed rest to prolong the pregnancy until at least 30 weeks.

But just a week after being admitted to the hospital, Natalia awoke with intense abdominal pain and vomiting. She was suffering from HELLP syndrome, a life-threatening pregnancy complication that sent her liver enzymes through the roof.

The baby — named Madison — was delivered by emergency C-section at 27 weeks and two days. She weighed just 1 pound, 8 ounces. Two days after birth, Madison’s lungs collapsed and she was placed on an oscillator, a type of mechanical ventilation.

Madison spent a total of three months in the NICU and continued to struggle. She was diagnosed with chronic lung disease (CLD) and a large patent ductus arteriosus (PDA). PDA is when a blood vessel in the heart that is supposed to close after birth remains open. As a result, babies have difficulty breathing normally due to increased blood flow to the lungs. A large PDA can lead to life-threatening problems.

The Newborn and Infant Chronic Lung Disease (NeoCLD) Program at Children’s Hospital of Philadelphia (CHOP) is world renowned for blending expert clinical care and abundant patience to help babies with severe CLD improve and thrive. In addition, CHOP has vast experience with various interventions to close the PDA. As a result, Maddie was transferred an hour south to CHOP, where she underwent a new, catheter-based PDA closure therapy CHOP now offers for infants using the Amplatzer Piccolo Occluder (Piccolo device) — a self-expanding wire mesh device that is smaller than a pea.

Catheter-based PDA occlusion is a revolutionary advance that offers clear benefit over the traditional approach that requires a surgical incision. To date, CHOP has treated hundreds of infants using the Piccolo device with outstanding results. The interventional cardiology team at CHOP has more experience than anyone in the region in treating these complex, fragile infants with PDA.

During the course of her admission to the Harriet and Ronald Lassin Newborn/Infant Intensive Care Unit (N/IICU), Maddie suffered a number of life-threatening setbacks. She also developed pulmonary hypertension, a condition in which the pressure in the blood vessels in the lungs is very high, causing extra strain on the heart. While she was eventually extubated to a form of ventilation called continuous positive airway pressure therapy (CPAP), she struggled to wean off high CPAP settings.

Even with high CPAP settings, Maddie was struggling to breathe and lagging in developmental progress during her physical and occupational therapy sessions. As a result, her medical team in the N/IICU — which included Kathleen Gibbs, MD, Medical Director of the NeoCLD Program, in collaboration with other members of the multidisciplinary team including pulmonologists and cardiologists from the Pulmonary Hypertension Program — ultimately recommended to Maddie’s parents that they perform a tracheostomy (surgical creation of a hole in the base of her trachea). This would allow Maddie to have a stable airway for long-term ventilator support while also being better able to do physical therapy, occupational therapy and speech therapy. Maddie’s parents agreed to the change and saw immediate results.

“The CPAP mask is huge and uncomfortable,” says Natalia. “Maddie isn’t bothered by the trach. She doesn’t even notice it’s there. Her face is free, and there’s nothing in her way.”

After the surgery, Maddie made great strides developmentally.

“She went from coding a few times a week, to being the happiest baby ever,” says her mom.

To supplement her nutrition, Maddie also received a gastrostomy tube (G-tube), which went through her skin directly into her stomach. It wasn’t long before she was doing well enough to be transferred out of the N/IICU and into CHOP’s Progressive Care Unit (PCU). After two months in the PCU, she was finally discharged home, nearly 10 months after her birth.

Slowly weaning off the vent at home

Maddie required 24/7 nursing the first two weeks at home, but now she just needs an overnight nurse. She is now off the ventilator during waking hours and working on weaning nighttime vent support. Natalia credits the NeoCLD Program’s robust educational program for teaching her how to care for her baby’s ventilator and feeding tube at home. 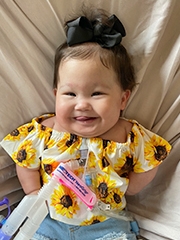 Maddie is in early intervention and she has continued to make significant developmental progress since being home. She sits up by herself, belly crawls, plays, rolls around on the floor, and is always cooing and smiling. She is now working on learning how to walk. She will continue to be followed by multiple CHOP subspecialists as an outpatient, including the chronic lung disease follow-up clinic, which combines members of the pulmonary hypertension and neonatal follow-up teams, as well as speech and language therapy, and nutrition.

“We are so happy to be home, but we really miss CHOP,” says Natalia. “We were there for seven months, and literally every person at CHOP — doctors, nurses, security, maintenance — was amazing. I never had a bad experience with anyone the whole time we were there. They always made us feel comfortable. You can tell that they really care about kids. It’s not just a job.” 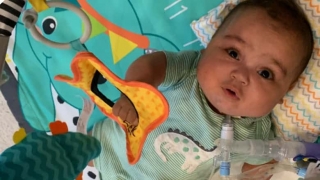 Courtney and Khaled made the difficult decision to have their son transferred to CHOP in the midst of a global pandemic. It was a lifesaving move. 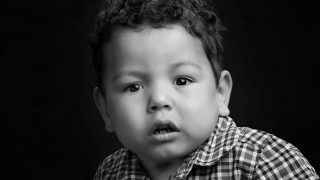 Born prematurely, Dylan Vazquez, 3, overcame daunting health challenges and is thriving today thanks to the care he received at Children’s Hospital of Philadelphia.