There were times during the first few months of Joseph’s life that his parents, Katie and Philip, didn’t think he’d survive. Then they found the Newborn and Infant Chronic Lung Disease Program at Children’s Hospital of Philadelphia (CHOP).

Joseph came to CHOP for expert care for bronchopulmonary dysplasia (BPD). When Katie and Philip first started trying to get pregnant, Katie told her husband, “We will take the baby however it comes.” Katie teaches web design in Queens, NY, and Philip is a special needs math teacher at a school near their home on Long Island. She felt confident they could handle any issue that came their way.

“We just wanted to be a good home for the child,” she said. “I think God heard me.”

Just 18 weeks into the pregnancy, Katie’s water broke and ruptured her amniotic sac. Physicians at the hospital near the couple’s home were concerned about the risk of intrauterine infection, which could cause preterm labor. They told Katie and Philip they had two options: They could terminate the pregnancy, or Katie could stay on bedrest and hope the pregnancy continued until at least 24 weeks, when the lungs would be developed enough for the baby to survive.

Katie and Phil opted to continue the pregnancy. At 29 weeks, their baby went into fetal distress and needed to be delivered by emergency c-section. He weighed just 1 lb 8 ounces.

Shortly after birth, Joseph’s lungs began to fail. He was intubated and placed on a ventilator. At one point, he was on 100% oxygen support. Over the next four weeks, his lungs continued to deteriorate and he developed bronchopulmonary dysplasia (BPD), a condition that occurs when premature babies whose lungs are underdeveloped are exposed to multiple stressors such as high oxygen, infection, and high levels of mechanical ventilation. The condition can be life-threatening if not managed properly.

Desperate for a solution that would help Joseph, Katie and Phil searched the internet and found information about Children’s Hospital of Philadelphia (CHOP), which has a specialized Newborn and Infant Chronic Lung Disease Program that treats babies with the most severe forms of lung disease. Katie spoke to a neighbor whose son had just been discharged from the exact program.

That was all Katie and Phil needed to hear.

Joseph was transferred and flown by helicopter to CHOP. As soon as he arrived, Katie’s fears were eased.

“I knew we were in the right place,” she says.

The journey for babies with chronic lung disease can be long and complex, and it can be overwhelming and intimidating for families when faced with the prospect of a long stay in CHOP’s Harriet and Ronald Lassin Newborn/Intensive Care Unit (N/IICU). The NeoCLD team’s goal is to provide the respiratory support each child needs to grow and get stronger so they can go home safely and go on to live a fulfilling life.

Support for the whole family during the N/IICU stay

Katie went on leave from her job so she could be by Joseph’s bedside 24/7. She got a room at the Ronald McDonald House, just a few blocks away from the hospital. There, her meals, lodging, and transportation to and from the hospital were taken care of. Philip traveled to Philadelphia as often as possible during the week and every weekend. Social workers supplied the family with meal vouchers and gas cards to lessen the financial burden on them.

Initially, Joseph needed high pressure ventilation and was fed through a nasogastric tube (NG-tube), a tube that carried the breast milk Katie pumped through his nose to his stomach. After four months, he began to grow, his lungs began to get better, and he became stable enough to receive a gastrostomy tube (G-tube), a tube surgically inserted through the abdomen that delivers food directly to the stomach.

A month later, Joseph had surgery for a tracheostomy. With a tracheostomy, the ventilator equipment moved from Joseph’s face, to an airway created in his neck. It was a game-changer, says Katie.

When Joseph was intubated, Katie and Phil couldn’t pick him up without help from a nurse. With the trach, they were finally able to pick him up out of his crib by themselves. Joseph was able to suck his thumb and play with his nose for the first time. The tracheostomy also made it easier for him to do physical therapy, occupational therapy and speech therapy.

Joseph’s health continued to improve. After 258 days at CHOP, he was discharged home with a ventilator and 24/7 nursing support.

Says Katie, when discussing what makes the NeoCLD Program so effective:

“It’s their strategy. They had some of the smartest minds in pediatric medicine come up with a plan tailored to him.”

Getting stronger every day 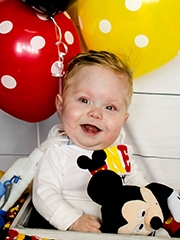 After 258 days in the N/IICU, Joseph got to go home and celebrate his first birthday. Joseph is now off supplemental oxygen, and his mother hopes he will begin weaning off the ventilator in the next few months. His physical therapy, occupational therapy and speech therapy sessions are focused on teaching him to eat by mouth.

“He has made a lot of progress since being at CHOP,” says Katie. “It’s been a rollercoaster, but we feel like we’ve hit a slope, and it feels nice.”

She recently sent the team at CHOP pictures from Joseph’s first birthday party, along with a note thanking them for caring for her son.

“CHOP is our savior,” she says. “I don’t think he would have made it. They are just unbelievable. The nurses became my best friends … my support system. And the doctors are so confident and loving.”

Katie and Phil look forward to Joseph’s trach being removed, which will be planned for when Joseph’s lungs grow stronger in a few years.

“I just want him to be happy,” she says. “To breathe and be happy.”