Brett and Jennifer will never forget the relief that came over them when paramedics arrived to transport their newborn son, Michael, to Children’s Hospital of Philadelphia.

Jennifer’s pregnancy with Michael had been uneventful, but within 15 hours of birth at the hospital near the family’s home in Quakertown, Pa., Michael began having seizures.

Brett and Jennifer were terrified. “We were beside ourselves crying,” Brett recalls. Seeing CHOP’s Transport Team arrive to the birth hospital to get Michael was reassuring. “They were whisking him away to the best place possible, and we were confident that they were going to figure everything out and make it OK.”

Supporting families through the N/IICU stay 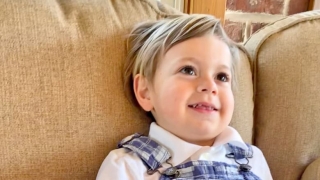 Michael’s seizures continued the entire ride to CHOP and lasted into his first few days in CHOP’s Harriet and Ronald Lassin Newborn/Infant Intensive Care Unit (N/IICU). He was given anti-seizure medication and they eventually subsided.

Jennifer and Brett were struck by the thorough care they received at CHOP. A team of highly skilled specialists from many disciplines assessed every possible cause for Michael’s seizures — from genetic causes to metabolic disorders to infectious diseases. The different teams rounded together and took the time to answer all Jennifer and Brett’s questions. Social workers helped Brett fill out insurance paperwork and forms to take time off from work, and lactation consultants helped Jennifer with pumping breast milk.

“They had someone there to help us with every stage,” says Brett. “You could tell they communicated internally because they were always on the same page. It was so comforting.”

Over the course of Michael’s 10-day stay in the hospital, Jennifer and Brett made use of the N/IICU’s sleep rooms and on-site showers. Having those accommodations on-site allowed them to stay close to their newborn son as much as possible and get the sleep they needed without having to commute the hour and 15 minutes to and from home. It also enabled Jennifer to pump milk at Michael’s bedside in the N/IICU at all hours, which helped establish her milk supply.

After a comprehensive evaluation, the team at CHOP determined Michael had suffered a perinatal stroke. A perinatal stroke can happen any time between 20 weeks’ gestation and 28 days after birth. It’s unclear when Michael experienced his stroke. It caused permanent brain damage that affected the right side of his body, primarily the use of his right hand.

Shortly after discharge from the N/IICU, Michael was weaned off of the anti-seizure medications. He hasn’t had any seizures since. He’s had follow-up appointments in CHOP’s Stroke Clinic every few months. Clinic appointments are arranged so he can see every member of his care team — which includes specialists from neurology, occupational therapy (OT), physical therapy (PT), speech therapy (SLP), physical medicine and rehabilitation, and neuropsychology — all on the same day. He’s been enrolled in early intervention therapies — including weekly OT and PT — for most of his life, and also goes to outpatient OT at the CHOP Care Network Specialty Care location in Chalfont near his home, as needed. Jennifer credits the therapists at CHOP with making sessions fun and motivating, which has rubbed off on Michael.

““They are leaders in their field, and they are all so good at what they do,” Jennifer says. “He works really hard in therapy, but it doesn’t always feel like it’s therapy because he has such a great attitude about it.”” 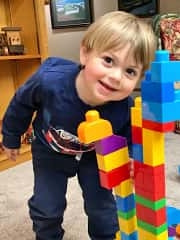 Michael and his parents are passionate about raising awareness about pediatric stroke as well as giving back to CHOP. They sponsor an annual toy drive for children who are patients at CHOP during the winter holidays, have raised money for and volunteered at CHOP’s stroke camp, and raise money for CHOP for Michael’s birthday every year. Brett even ran 100 miles in one month to educate people about and raise funds for pediatric stroke for CHOP’s annual 31-Day Challenge.

Today, Michael is a playful and energetic 3-year-old who loves playing outside, dancing to music and helping his little brother. His great attitude, perseverance in overcoming the effects of his stroke, and advocacy efforts recently earned him the American Stroke Association’s 2021 Voters’ Choice Hero Award. The Stroke Hero Awards are given every year to individuals who educate, inspire, and raise awareness about stroke locally or nationally.

“Michael is a miracle baby and has already proven that he can beat the odds,” says Jennifer. “I tell him every single day that I’m proud of him. [The Hero Award] just really shows him that there are a lot of people who are proud of him and who are learning from his story and inspired by his story.”