After delaying a trip to the hospital resulted in a life-threatening infection, one mother learned a valuable lesson she wants to share with other parents who may be avoiding care due to COVID-19: Don’t hesitate.

If her son’s illness had happened over the winter, Riccina would have taken 14-year-old Marco to the family doctor or the local urgent care in a heartbeat.

But his sudden onset of hip pain then vomiting happened in mid-April during the height of the COVID-19 pandemic. Fear of catching the novel coronavirus and possibly spreading it to the family’s other three children, changed her thinking.

“We were scared to go to the doctor,” Riccina says. “All you heard was if you stepped a foot inside a hospital, COVID was everywhere.”

The five days Riccina tried to nurse Marco back to health at home could have cost him his life. 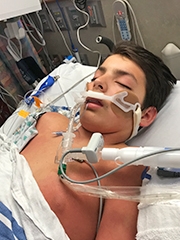 Once Marco finally came to Children’s Hospital of Philadelphia, he had a blood infection that had turned into life-threatening toxic shock syndrome. Massive doses of antibiotics and other aggressive interventions were needed to fight the infection — and he survived.

“If I had taken him in sooner, we would have prevented the toxic shock,” Riccina says. “I felt like a horrible mother because I didn’t take him right away. Because of all the hysteria about COVID, I was afraid. I thought we could die if we went to the hospital or I would have to leave my 14-year-old son by himself.”

Instead, she learned a valuable lesson she wants to share. 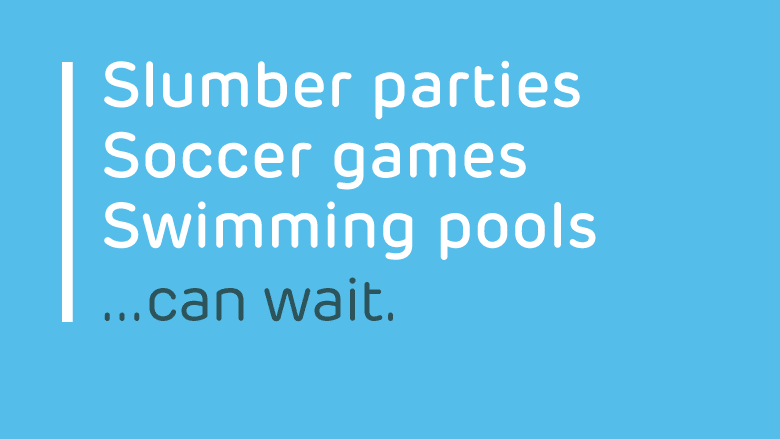 Learn more about the dangers of delaying care and why bringing your child to CHOP is safer than ever.

Marco, an athlete, had created a rigorous workout routine so he’d be in shape when baseball started back up. When his hip began hurting, he thought he had aggravated an old injury.

But later that day, he became violently ill, vomiting and getting achy. The next morning, he was still vomiting, felt weak and had developed a rash. “I called our family doctor, whom we love,” his mom says. “Because I was scared about COVID, we set up a video visit.”

Riccina had kept Marco’s room dark, and he was in bed, covered up, during the telehealth visit. “The doctor really couldn’t get a good look at him and couldn’t see his red and swollen feet,” she says. “The doctor thought he had COVID and quarantined us.”

Over the next four days, Marco didn’t show key COVID-19 symptoms, like coughing. His fever came and went. But he wasn’t eating, and began refusing fluids.

Riccina thought a bath might help him feel better, and her partner came to help get him in the tub. “He saw the swelling and rash on Marco’s legs — it was almost purple — and immediately said, ‘You need to take him to the hospital,’” Riccina says.

They went to a local emergency room near their Gloucester, N.J., home, where a test showed Marco did not have COVID-19. Doctors thought he might have gall stones and quickly arranged an emergency transport to CHOP. “They said CHOP was the best place for him,” Riccina says.

When she and Marco arrived at CHOP’s Emergency Department, she saw right away it was prepared for the pandemic.

“I saw plenty of PPE (personal protective equipment) on everyone. There was limited traffic in and out of our room. I felt comfortable they were taking every precaution,” she says.

ED doctors diagnosed Marco as having toxic shock syndrome, and it was wreaking havoc with his blood pressure. Extremely low blood pressure means the body can’t get the oxygen needed to carry out basic functions. Without treatment, it damages the heart and brain and can be fatal.

Marco was quickly transferred to the pediatric intensive care unit (PICU) to receive intravenous antibiotics, fluids and medications to raise his blood pressure. An MRI found the source of his infection: an abscess in his upper femur, near his hip, that had caused osteomyelitis, a bone infection.

“I was never scared at CHOP,” Marco says, “because I knew I was in good hands.”

On the mend, on the mound 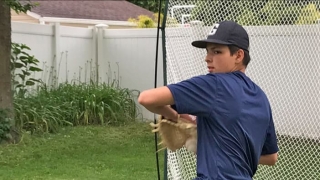 After seven days of rigorous treatment at CHOP, Marco was able to go home. He is now free of infection, and working on regaining his strength so he’ll be ready to take his place on the pitcher’s mound once baseball resumes.

Looking back, Riccina says, it was a rollercoaster of emotions.