Elijah’s condition was a mystery: After years of painful symptoms and examinations by dozens of specialists at four hospitals, no one could say what was wrong with him. 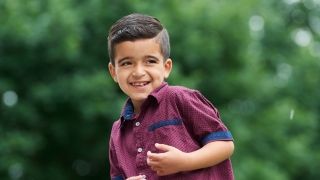 When Elijah was 5 months old, his belly became “super extended,” says his mom, Noami Patino. Tests revealed that his spleen was about three times larger than normal. For two years he was on medication to suppress his immune system and lessen the inflammation. Then, during a family vacation, he took a turn for the worse. He got a fever every day, and his skin had a yellow hue. It turned out he had developed major infections in his lungs and liver. The Patinos decided to come to CHOP.

CHOP specialists ordered a new type of test — whole exome sequencing, which catalogs a person’s protein-coding genes. After months of analysis, doctors identified an extra copy of a gene called CD40LG that was causing Elijah’s white blood cells to attack his own organs. This was the first known case of this gene being duplicated.

With this information in hand, immunologist Neil Romberg, MD, called the Patinos.

“I’ll never forget that call,” says Elijah’s dad, Rich. “It was a voicemail saying, ‘My name is Neil Romberg, and I’m a doctor at CHOP. I came across Elijah’s file, and I think I can help.’”

Tests of other family members revealed that Noami shared the same genetic mutation, but her symptoms were much different: just periodic joint pain and sluggish blood flow to her fingertips. This autoimmune disease acts differently in females and males because women’s two X chromosomes silence the extra CD40LG. Noami’s genetic doubling was likely accidental, then Elijah inherited it from her. As of now, Elijah and Noami are the only two people in the world diagnosed with the disease.

Romberg and the team set out to find a customized treatment for Elijah. They thought a potent immunosuppressant medication used to prevent organ rejection after transplant could be the key. After CHOP researchers tested the medication on Elijah’s cells in a lab, he began taking the customized therapy. “Within a week or two, we started noticing a difference,” Noami says.

Now 7, Elijah is an active second grader whose story recently received national media attention. “Words can’t capture what it means to see Elijah doing so well,” Rich says. “To have a hospital like CHOP go above and beyond for one child — our child — is so special.”

When few are affected, it can seem that few care — but not at Children’s Hospital of Philadelphia. CHOP harnesses the intellectual power of its many researchers and clinicians in order to fully understand and develop new treatments for rare diseases. The hospital also builds robust programs that gather a wealth of information about specific rare diseases and give clinicians extensive experience with patients. Generous donor support is essential for all of this to happen.