During the pandemic, when now 11-year-old “Bubba” (Jack) was quarantined at home with his large family, including three older sisters, one younger brother and one younger sister, he convinced them all to pass the time with CrossFit. That’s Bubba — full of energy and enthusiasm, even during difficult circumstances. So, when Bubba was diagnosed with chylopericardium and his infectious spirit began to waste away, his parents knew something was very wrong and turned to Children’s Hospital of Philadelphia (CHOP) for help. 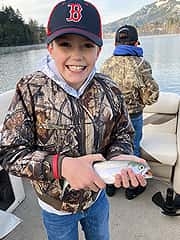 Born with transposition of the great arteries and tricuspid atresia, Bubba had already undergone four open-heart surgeries, including the Fontan procedure at 5 years old. Single-ventricle individuals, like those with Fontan circulation, have elevated central venous pressure, which may put them at higher risk for lymphatic disorders.

After Bubba’s fourth open-heart surgery, he developed a pleural effusion, a condition in which excess fluid builds up around the lungs. Bubba was admitted to his local Portland hospital where doctors drained the effusion and discharged him. A few months later, however, during a post-surgical follow-up, an echo revealed a pericardial effusion. This time, the fluid had turned “chylous,” and Bubba spent 10 days in the ICU with a chest tube draining fluid from around his heart.

A healthy lymphatic system carries fat, protein and other nutrients throughout the body through lymph vessels. When the lymphatic system isn’t working properly, this normal flow can’t happen. Chyle, which is made of lymph fluid and fat, can’t get into the blood. Instead, it leaks into other parts of the body. Chylopericardium is a rare condition in which lymphatic fluid leaks into the space around the heart. When this fluid builds up, it can compress the heart and lead to poor heart function.

The Jill and Mark Fishman Center for Lymphatic Disorders at CHOP is the world’s only center providing highly specialized care for children and adults with lymphatic disorders. Bubba’s Portland care team consulted with Aaron G. DeWitt, MD, an attending cardiologist in CHOP’s Lymphatic Center. Dr. DeWitt recommended medication management and a low-fat diet. The fluid decreased enough for the chest tube to be removed and for Bubba to return home with his family.

For a while, he remained stable, but soon began to experience weight loss and limited appetite. A heart catheterization procedure showed Bubba’s left lung was functioning at approximately 20 percent, with vessels so compressed it was barely getting any oxygenated blood. His care team drained nearly one liter of fluid, only to have it immediately build up again.

“We knew that CHOP is the only place in the country to go for lymphatics,” says Bubba’s dad, John, Lt. Colonel of the 225th Air Defense Squadron. “There aren’t any other places that have committed the same amount of time and resources to solve this problem in children.”

Bubba’s family began to work with CHOP’s lymphatics team to determine the best course of treatment. In the meantime, Bubba lived in a state of chronic illness, with little energy and no appetite, even for his favorite food, meat subs. “I could only get him to eat a few bites,” says Bubba’s mom, Cara. “That’s how we were living: day by day, bite by bite.”

Once Bubba’s lymphatic intervention was scheduled, the family encountered many obstacles on Bubba’s path to care, including COVID-19 and d-dimer levels (a marker for inflammation) far too high for Bubba to undergo surgery. “It was hard to deal with as a big family,” says John, “but CHOP reinvigorated our hope. We knew Bubba could get better.”

Finally, Bubba was cleared for surgery and the trip to CHOP was scheduled. Though John and Cara had both attended all four of Bubba’s previous surgeries, the last several months of medical trauma had taken a toll on the family, and the couple decided that Cara would take Bubba alone. “I’m used to having John with me,” says Cara, “but at that point, I would’ve walked to Philadelphia to get Bubba help.”

Bubba underwent a lymphatic intervention with Yoav Dori, MD, PhD, Director of the Center for Lymphatic Disorders. This procedure included selective embolization to block the leaking lymphatic vessels. It took nearly ten hours, and the care team kept Cara informed with regular updates. Afterwards, Dr. Dori explained the intervention to Cara, drawing the lymphatic system for further illustration. “I asked him to autograph his drawing,” laughs Cara. “He’s my hero!”

An outpatient surgery nurse, Cara has high expectations of medical care and was impressed by the level of expertise with which the Cardiac Center nurses cared for Bubba. “They thought of things we needed before we knew we needed them,” she says. “I felt like I could just be a mom and trust them to manage his care. The CHOP team held our hands through the whole experience. They helped heal our hearts, in so many ways.”

Bubba spent nine days in recovery at CHOP; he was visited by Dilly, CHOP’s full-time facility dog, and he loved making slime with his favorite child life specialist. When, during rounds, Bubba pulled up a chair so he could listen to the doctors talk about his care, Cara told them, “Guys, Bubba’s back.” 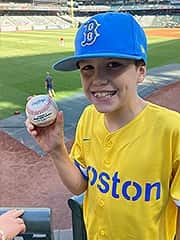 Follow-up echocardiograms at home in Portland have shown no further issues for Bubba. He’s playing sports again, including baseball with his younger brother, and is back to eating his favorite foods. Thrilled that her son is getting back to a healthy weight, Cara says, “Every meal is a joyous occasion!”

Adds John: “We’re just so grateful that Dr. Dori and others saw a need to help kids like Bubba, who have already had so many heart surgeries. This experience affected every part of our lives, but we kept going and we tried to find joy every day. This was one chapter of Bubba’s journey. Thanks to CHOP, we got through it, and we came out stronger on the other side.”