Elena, now 10, was losing her sight. It was December 2014, and over the course of several weeks, her vision had deteriorated. She had an MRI at a children’s hospital in her home state of Ohio, and the results showed a tumor pressing against the optic nerve. It was a craniopharyngioma, a rare type of benign brain tumor that begins near the brain’s pituitary gland. As the tumor grows, it can affect the function of the pituitary gland and other brain structures. 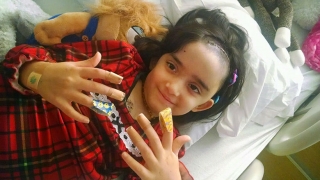 Two days after the MRI, Elena had surgery. “The surgeon said to us, ‘I got as much as I could,” remembers Elena’s mother, Lina. “Her particular tumor has the worst quality-of-life outcomes. We lucked out — surgeries like these can do a lot of damage.” Elena came through fine, and her vision improved significantly. “But we knew there’d be a high chance of the tumor coming back.” And 18 months later it did.

Considering where to go for treatment

Because these tumors generally grow slowly, the family had time to research how to address the recurrence. They were particularly intrigued by proton therapy.

Proton therapy, which uses a highly precise beam to target radiation directly at a tumor

site, is used to treat many different types of malignancies, but is mainly used for solid tumors. The goal is to give as much dose as possible to the tumor and spare normal tissue around it, so as to not cause future side effects from the radiation, especially in children.

Elena’s family contacted several children’s hospitals, including Children’s Hospital of Philadelphia (CHOP). CHOP’s Pediatric Proton Therapy Center is located in the Roberts Proton Therapy Center in Penn Medicine’s Perelman Center for Advanced Medicine, across the street from the hospital. The facility is child-friendly, with a waiting area and anesthesia suite designed with pediatric patients in mind.

They talked to CHOP pediatric oncologist Christine Hill-Kayser, MD, Chief of the Pediatric Service for the Department of Radiation Oncology at the Hospital of the University of Pennsylvania. Hill-Kayser was confident Elena’s tumor could be treated using only proton therapy, but explained that CHOP has world-class pediatric neurosurgeons if that route was needed. “They were so nice and reassuring,” says Lina. The family decided to travel to Philadelphia from Ohio for proton therapy in spring 2016.

“We worked closely with Elena’s family to design an approach to treatment that would allow her the best potential to be cured of her disease while minimizing risk of damage to her visual structures, pituitary gland and brain,” explains Hill-Kayser. “We designed a proton therapy plan that utilized three beams converging on the tumor target, each delivering a third of the needed dose.”

During a proton session, a patient needs to be immobilized so they’re in the same position every day. If treating the head and neck, the patient gets fitted for a mesh mask that covers the face and upper body and attaches to the table. “She really didn’t mind the mask,” says Lina. “She went through it all fine. She could pick out music to listen to during the treatment.”

specialists and others who are experts on the unique needs of children with cancer. “The child life specialists treated her like a queen,” says Lina. “But it wasn’t just Elena — it was a family affair. Child life was amazing because they really involved our son and helped him deal with the idea of his sister getting ‘lasers’ for her tumor.”

Proton particles are heavy. They deposit most of their dose at the end of their track, then they stop. This arc is different from photons, for example, which are very light particles that continue to emit doses as they travel beyond the tumor site.

“Using complex hardware and software,” says Hill-Kayser, “we can make each proton beam stop exactly where we need it to — in Elena’s case, we designed three beams to enter her brain from different angles and stop as soon as the tumor target had been treated. Through this approach, we were able to minimize radiation dose to the normal brain, nerves and blood vessels.”

Elena had 30 rounds of proton therapy in 49 days. During that time, Elena underwent MRI scans every two weeks to ensure that her tumor had not shifted in a way that would require modification of the radiation plan.

Didn’t slow her down 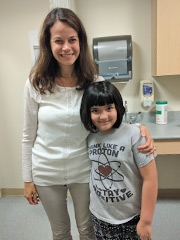 Elena with Dr. Hill-Kayser Elena was able to stay active during the entire treatment phase, exercising and going on long walks. “We tried to create a routine: Every day we took a big city hike and sometimes attended Zumba,” says Lina. “We tracked our walking, sometimes doing 6 or 7 miles a day.” They were at CHOP during Daisy Days, a community-wide fundraising effort that happens during the whole month of May. Elena signed up for the Daisy Days 31-Day Challenge, where participants pledge to walk, jog or run a certain number of miles to raise funds for CHOP. Elena walked 105 miles that May.

Now, two years later, she remains free of disease, loves singing and acting, and is in the gifted program at school. She comes back to CHOP every June for follow-up visits. “We love our yearly return visits!” says Lina. During these visits, Hill-Kayser gets a glimpse of Elena’s life: “She always brings photos of herself in theater productions to her appointments!”

When Elena was first admitted to the Ohio hospital, she was legally blind. Today her vision is 20/20, with minor issues with peripheral vision. “There was no cognitive or hearing damage, no arterial damage,” says Lina. “It’s such an amazing technology. It’s like reverse 3D printing.”