The idea of taking a healthy nerve in a child’s neck and connecting it to a paralyzed vocal cord to improve the child’s voice quality sounds almost magical. Same goes for the story of three middle school students ending up with super powers while working on a science project.

Kayla Hebbon was the beneficiary of the very real first scenario and the author of the very fictional second one. 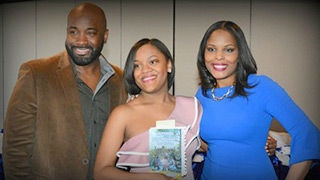 Now 15, when Kayla stands in front of classrooms and crowds of strangers to promote her book, Anything But Ordinary: The Beginning, her voice is strong and, well, normal sounding. “I’ve been to a few schools to talk about the book,” says Kayla, who underwent nerve reinnervation to improve her voice at Children’s Hospital of Philadelphia (CHOP) in 2011. “I had a book signing at Macy’s at the Bridgewater Mall. I also did an event at a museum for kids, to encourage them to read. It’s a lot of fun.”

She was always a reader. “I love stories!” she says enthusiastically. When she was 12, she started writing a book. The first draft was “cringe,” so she rewrote it, then self-published it in early 2018. It follows three middle schoolers on their adventures, which include overcoming their differences and dealing with a bully — not to mention figuring out how to use their superpowers, like telekinesis, invisibility and intangibility.

“She has a fantastic imagination,” says her mother, Kisha. “She’ll accomplish whatever she sets her mind to do.”

If this determined teen has her way, she’ll be doing a lot more appearances in the coming years. She plans to write additional books, TV screenplays and, maybe, movie scripts.

Seeing Kayla now, it’s difficult to think how close her parents came to losing her.

Kayla was only 1 pound, 10 ounces when she was born, 14 weeks premature. “It was very touch and go for awhile,” her father, Sean says. “She coded on us, but she pulled through. She’s a tough one.”

She did require help breathing through a tube in her windpipe (intubation) for 10 weeks, and the tube damaged her vocal cords. She also had a heart defect called patent ductus arteriosus (PDA), and repairing it may have also damaged the nerve that controls the vocal cords.

“Both vocal cords were paralyzed,” Kisha says. “We didn’t hear sounds from her until she was 9 months old.”

She outgrew other challenges of her premature birth, but Kayla’s left vocal cord did not recover. Her voice ended up very rough and raspy.

“I didn’t really think of it as being different,” says Kayla, “unless someone pointed it out to me.”

One time, there was a woman on a plane, who, when hearing Kayla talk, said she sounded like Donald Duck. While her friends were used to her voice, children she didn’t know would ask her if she talked funny because she was sick. And teachers sometimes had trouble hearing her in the classroom.

“She made it work for her,” Sean says. “She was the opposite of shy. She talked a lot, she was very confident and very active playing with other kids.”

Still, her parents sought answers. “You want your child to be as normal as possible,” Sean says. “If you can remove barriers, you want to do it.”

When she was 8 years old, her parents were referred to the Pediatric Voice Program at Children’s Hospital. Program Director Karen Zur, MD, performed a stroboscopy, a test where a small, thin, flexible tube with a camera is gently inserted through her nose to the back of her throat to examine her vocal cords. It showed Kayla’s left vocal cord was paralyzed. That meant it wasn’t meeting up with her right vocal cord, a condition called glottic insufficiency, causing her raspy voice.

During the surgery, Dr. Zur made a small incision in Kayla's neck and attached another nerve, called the ansa cervicalis nerve, to her damaged RLN. The ansa cervicalis nerve began to do the work of the RLN, telling the formerly paralyzed vocal cord to contract, and, over time, Kayla’s voice quality improved.

“Initially, we didn’t see much change,” Kisha says. “But slowly, a little bit at a time and with the help of voice therapy, it was less and less raspy.”

The before vs. after became apparent for Kayla when she heard a recording of her pre-surgery voice. “I could really tell that it is so much clearer now. It sounds better. It really impacted the ways I sound — in a good way,” she says. “I sound more mature.”

Her initial reservations about how the incision in her neck would look went away, too. “I was worried my neck would look weird, but the stitches blended in, and now you can’t even see where it was,” Kayla says.

She came away from the experience with a better understanding of — and appreciation for — how complicated making sound is.

“CHOP helped me learn more about my voice and what was happening with my vocal cords. Since the surgery, everything has been better,” she says.

Next up: another book in the series 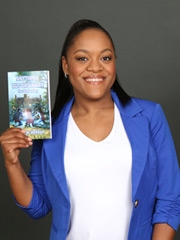 Now in the 10th grade, in addition to continuing Girl Scout activities and playing the piano, Kayla has her sights set on finishing the sequel to Anything But Ordinary: The Beginning. “I have a lot of books in my head,” she says. “Then, when I grow up, I’d like to turn the books into a TV series for kids.”

Showing kids that science is cool, that it’s OK to be unique, and that even kids who may seem different from each other can still be friends are all themes she explores in her book.

“She’s a save-the-world type of kid,” Sean says. “While she didn’t deal with a lot of bullying, she understood that some kids were bullied. She wants everyone to be respectful and work together. The book addresses that."

“Kayla has overcome so much, and kids who have read her book tell us she inspired them. It’s cool," adds Sean.