Until Onni came to the Pulmonary and Allergy Personalized Asthma (PAPA) Clinic at Children’s Hospital of Philadelphia, her severe asthma put her in the hospital just about every month during her first 8 years. These days, she can play outside, isn’t missing school and has stayed clear of the ER. “I don’t know what I would do without CHOP,” says her mother, Latoya. “I mean that.” 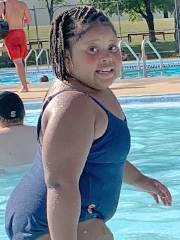 Onni began having breathing problems when she was 1 month old. Over the years, her local doctors near their home in Mechanicsburg, PA, tried “a bunch of different treatments,” but nothing worked. “They kept increasing her steroids,” Latoya says. “She still ended up in the hospital, and all those steroids made her gain weight, too. They said it was the worst case of childhood asthma they had ever seen. They didn’t know what to do.”

Onni’s life was limited, too. The combination of her many allergies — grass, dust and animals, to name a few — and her asthma-weakened lungs made playing outside unworkable. “She was like the Bubble Girl,” Latoya says. “If she was outside for an hour, before long she’d be all congested and end up in the hospital.”

Missing so much school and her inability to play during recess made it hard for her to make friends with her classmates. “She was inside, by herself, too much,” her mother says. “One time she said to me that she’d be better off in heaven since she couldn’t do anything because of her asthma.

“I knew something had to be done,” Latoya says. When a co-worker mentioned the PAPA Clinic, it sounded perfect.

Pulmonologist and Allergist Work Together for Solutions

The PAPA Clinic recognizes that for some children, the presence of both asthma and allergies is a double whammy that, as in Onni’s case, can be life-threatening. Pairing the expertise of a pediatric pulmonologist, Jeffrey Ewig, MD, and a pediatric allergist, Priya Patel, MD, allows each patient to receive a personalized care plan that addresses both conditions.

The first appointment included a thorough medical and personal history. “We talked about everything,” Latoya remembers. And she brought in all five inhalers Onni was using at the time, plus her allergy medications.

Next Onni had a triple scope procedure, which consists of a flexible bronchoscopy, a rigid bronchoscopy and an esophagogastroduodenoscopy that together examine the upper and lower airways, as well as the esophagus, stomach and duodenum (very top of the small intestine) to try to identify any reason for Onni’s severe asthma. The procedure showed that her reflux was not being controlled by her current medication.

Her new treatment plan called for weaning Onni off the high volume of steroids she was taking, properly treating her reflux and beginning new asthma treatment with a combination medication (Dulera®) that includes both an inhaled corticosteroid and a long-acting beta agonist She also uses a second inhaler (SPIRIVA®) to minimize asthma attacks.

Onni began to see an endocrinologist, since excessive steroids can impact adrenal function, growth and bone density. She was diagnosed with borderline diabetes and referred to a dietitian, who has helped her eat healthier. In a few months, she lost 15 pounds. 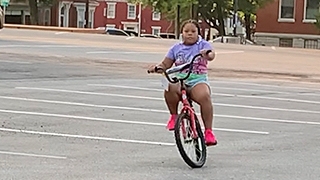 “She’s like a whole different child now,” Latoya says. “She swims and bikes and plays during recess, running around with her friends. It’s the first time she’s been able to do that.”

The family also worked with PAPA Clinic psychologist Nancy Silverman, PhD, who helped Onni learn relaxation techniques she can use so shortness of breath doesn’t advance to an asthma flare.

If Onni finds herself gasping, she knows to use breathing exercises. “It’s a deep breath in through the nose and a slow release of air out the mouth,” Latoya says. “She relaxes herself, and it does work.”

In between clinic appointments, PAPA coordinator Melissa Rojas calls to check how things are going. “She makes sure we aren’t having any problems, that we have our medications and refills, a clean spacer, everything.” Early on, when the family’s insurance balked at approving Onni’s new medication and dosages, Dr. Ewig advocated for them. “He was on it and made it happen,” Latoya says.

Clinic social worker Maryori Canales, MSW, calls before each appointment to make sure there were no barriers to getting to Philly and to remind Latoya to bring all of Onni’s medicines with her so they can review each one.

Onni is now a third grader who hasn’t missed any school. She can play in the park down the street with her new friends without having an asthma attack. Even when she caught a cold, she didn’t end up in the hospital — the first time that has happened.

“Whoever thought of putting all those doctors together in one clinic — it was a great idea. They put their heads together and came up with a plan. The clinic is truly a blessing for us.”