Twelve-year-old Caylin is a budding scientist. She loves comparing numbers, gathering data and experimenting. Her current quest is to create the perfect slime — finding just the right texture and color — for optimal fun. She’d like to create an online store to sell her best creations. 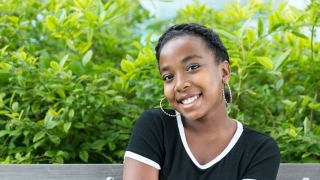 Caylin’s passion for science stems from her own experience. She has sickle cell disease, an inherited blood disorder that causes chronic anemia, periodic pain and other complications. Her disease puts her at greater risk of severe infections, blood clots and stroke.

Her research has included hundreds of trips to the Emergency Department at Children’s Hospital of Philadelphia (CHOP) for sudden fevers, repeated overnight hospital stays to control infections, and regular blood transfusions to lessen her risk of stroke.

“Caylin is very well informed about her disability,” says her mom, Melissa. “She can tell you about her medicines, how her blood is transfused, and other details about her treatment. As she’s grown, she’s become an advocate for her own health.”

Caylin appeared healthy at birth, but a routine newborn screening identified a problem. Her family was referred to CHOP, where doctors confirmed Caylin had sickle cell disease.

Sickle cell disease is the most common inherited blood disorder in the United States, affecting about 1 in every 360 African-American newborns. Children of Mediterranean, Arabian and Indian descent also carry a higher risk of being born with the disorder. Sickle cell disease affects the red blood cells in the body — changing them from soft and round to hard and sickle-shaped. The abnormal red blood cells can restrict blood flow to certain parts of the body and cause pain, stroke and organ damage.

Caylin’s family was devastated by the diagnosis, but determined to help their little girl. They sought care and treatment from CHOP’s Comprehensive Sickle Cell Center, one of the largest of its kind in the nation. The center cares for more than 1,000 patients each year, providing specialized testing, monitoring and treatment for children and adults.

For the most part, Caylin’s early years were like any other child’s. They were filled with typical milestones — her first smile, her first word, crawling, talking and walking. Unlike a healthy child, however, whenever Caylin developed a fever she had to be rushed to the hospital. And that happened once or twice a month.

At each emergency visit, doctors would examine Caylin, review her blood work and prescribe IV antibiotics to fight the infection. After 24 hours in the hospital, and once her condition had stabilized, she was able to return home.

As Caylin grew, her family learned more about her condition and possible warning signs of infection, including fevers, breathing issues and personality changes. Normally a bright, bubbly and inquisitive child, when Caylin wasn’t acting like herself, her mother knew to call Caylin’s hematologist at CHOP.

Caylin began to experience some pain related to her disease when she started school. Everyday tasks like gym class, swimming or walking around the mall tired her quickly. The exertion lead to fatigue, and the fatigue lead to pain in Caylin’s chest, arms and legs.

Again, Caylin’s family sought answers from the experts at CHOP. Blood tests revealed Caylin’s condition was deteriorating and her risk of stroke was increasing. A new treatment plan was needed.

Hematologists from the Sickle Cell Center huddled with experts in CHOP’s Apheresis Program to determine next steps. They knew Caylin would benefit from repeated blood transfusions — a proven therapy for preventing stroke in children with sickle cell disease — but also wanted to avoid potential side effects of the transfusions. Some children who receive multiple blood transfusions develop toxic levels of iron in their blood, which can also cause serious health issues.

Caylin received her first erythrocytapheresis treatment when she was 7 years old and has repeated the procedure every three weeks since.

Home away from home

Because managing Caylin’s disease requires regular visits to CHOP for blood transfusions and doctors’ visits, the Hospital has become a home away from home and the staff have become family, Melissa says.

Caylin was apprehensive and scared when she first began the transfusions. Nurses and child life staff explained the procedure in kid-friendly terms, and then entertained, distracted and calmed her during the three- to four-hour procedures. As Caylin became more comfortable with the procedure, she began asking questions … and a budding scientist was born.

“Being able to see the doctors every three weeks, we’re able to have regular conversations and they give us input,” Melissa says. “It builds relationships.”

Caylin also feels comfortable asking questions and advocating for her own needs.

Today and looking ahead 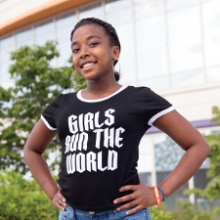 If the medication proves successful in preventing strokes in patients with sickle cell disease, Caylin may be able to decrease the frequency of the transfusions — or stop them completely. “Caylin is excited,” about the possibility, her mom says.

“As a parent of a sickle cell child, all we want is to know that our children will live a normal life — or just live,” says Melissa.

While Caylin’s experience has been far from easy, she and her family know she is getting the expert care she needs.

“My daughter is not just getting medical attention, but she’s happy,” Melissa says. “She’s at peace, and she knows that she’s in the best place.”

Through your support of For Tomorrow’s Breakthroughs, you will empower CHOP to move breakthroughs from the lab to clinic, where they can help children and families. Our researchers are harnessing the power of genomics and big data to figure out what causes pediatric diseases and then target treatments accordingly. You may choose to support research initiatives at CHOP or invest in another area that touches your heart. Please give today.