In early 2015, when Julia was 9, she became sick, with symptoms of morning vomiting, fatigue and minor headaches. After several trips to the pediatrician and a referral to a gastroenterologist, her parents, Sue and Scott, noticed that Julia’s smile was crooked and she was not using her left arm as much. 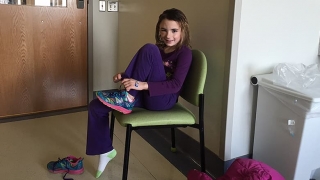 Their concern grew as her symptoms did not seem to fit any of the illnesses for which the GI doctor wanted to test. Then in March, the school nurse called to say Julia was complaining of a headache and was having difficulty swallowing acetaminophen, so her parents rushed her to the Emergency Department at Children’s Hospital of Philadelphia (CHOP). “The 15-minute drive to CHOP was terrifying,” Sue recalls. “Julia was slumped over to one side and was very lethargic and could barely respond to questions.” Scott carried her into the ED, where she was seen almost immediately. The initial thought was that she was dehydrated. “We had a terrible feeling that was not the case,” says Sue. After fluids did not help, she was taken for a CAT scan: “Our worst fears were confirmed — Julia had a large tumor on the right frontal cortex of her brain.”

“Although it was a difficult diagnosis to grasp, we were told very encouraging news from the beginning,” says Scott. Julia’s neurosurgeon, Phillip “Jay” Storm, MD, met with Sue and Scott in the Emergency Department explained that Julia would be having surgery “during this hospital admission.” “How did we send our daughter to school that morning and now we were talking brain surgery within the next day?” Scott remembers with amazement. That evening, Dr. Storm performed a procedure to drain the fluid from the cystic part of the tumor. During this surgery, they also did an MRI so that Dr. Storm could plan the surgery to remove the tumor.

Julia’s reaction to learning what was wrong was memorable: “When we explained to her that the doctors discovered what had been making her sick and that they were going to do surgery to take out the tumor, she responded with an emphatic ‘Yay!’” says Sue. “Julia has always been a very tough child, and it was evident that she had been feeling much worse than any of us knew.”

The next morning, Dr. Storm removed the entire baseball-sized tumor during a five-hour operation. The location of the tumor was ideal for complete removal, and the type was classified as non-cancerous, meaning neither chemotherapy nor radiation was needed after surgery. After a few weeks of physical therapy, Julia was back to all her normal activities.

Now, more than seven years later, Julia is an active, healthy teenager who plays varsity and club lacrosse and soccer and excels academically in high school. She enjoys hanging out with her friends, skiing and going to the beach.

“Words cannot summarize our gratitude for the doctors, nurses and the rest of the staff at CHOP who treated Julia and who care for sick kids day after day,” says Sue. "While we feel that her full recovery was a miracle, we are so fortunate to have CHOP in our community. Without CHOP. Julia’s outcome and long-term prognosis could have been very different!”