Shaika Echtibi has faced more challenges in her first five years than most people will face in a lifetime.

Born three months early in the United Arab Emirates (UAE), Shaika showed signs right away that something was amiss. It took many specialists, at hospitals from Dubai to London, to figure out what was wrong. But it was a multidisciplinary team at The Children’s Hospital of Philadelphia that began making it right again.

Shaika was born prematurely and with many congenital abnormalities. Tracheoesophageal fistula (TEF), a condition where there are abnormal connections between the airway and esophagus, let food pass into her lungs. Laryngomalacia, in which the tissues of the voice box are soft and floppy, made breathing difficult. A heart defect made Shaika very weak. And malformation of the diaphragm, the muscle that allows the chest to expand when inhaling air, worsened her other conditions.

Shaika was intubated as an infant (a breathing tube was inserted through her mouth and down her airway), because the condition of her body made it impossible for her to breathe on her own.

Many attempts were made to repair her airway and diaphragm. All were unsuccessful. And one was catastrophic.

During a surgery to repair her trachea, Shaika stopped breathing for 10 minutes. The surgical team was able to save her life, but she was left with brain injuries that caused serious developmental delays.

All of this happened before Shaika’s first birthday.

After the failed surgeries, she was left with a feeding tube and a tracheostomy — a removable tube placed into an opening in her neck that let oxygen get to her lungs.

“My wife and I were given little hope that she could ever fully recover,” says Shaika’s father, Hazza. “We believed this was her fate, and could not object. We went home to the UAE believing she would always be dependent on the trach.”

Soon, she had more complications related to her tracheostomy.

In 2010, Shaika’s case got the attention of the UAE health department, which turned to the embassy to help.

“The UAE embassy recommended that Shaika go to The Children’s Hospital of Philadelphia (CHOP),” says Hazza. “They chose CHOP for my daughter because the institution could offer expertise in every specialty that would be required to manage her care.”

A new plan for Shaika

The embassy worked with International Patient Services at CHOP to coordinate the Echtibi family’s trip to Philadelphia, their housing and more. As soon as they arrived, a group of specialists went to work evaluating the 2-year-old.

In the Progressive Care Unit (PCU), Richard Lin, MD, was one of the first to meet Shaika. He remembers that when she first came to CHOP, she was emaciated, a result of her complex condition. Dr. Lin and a multidisciplinary team worked together to figure out how to help the little girl. The observations of the team in the PCU led to further evaluations by otolaryngologists and airway surgeons.

"When I first assessed Shaika, I found that she had a rare congenital anomaly known as a Grade 3 laryngotracheoesophageal cleft,” says Steven E. Sobol, MD, MSc, FRCS(c). “The opening between her airway and esophagus allowed for frequent passage of secretions into her lungs and prevented her from having a voice.”

“Other places gave me no hope,” says Hazza. “But when I came here and met Dr. Sobol, he told me that although Shaika’s condition was very rare, he knew what they were going to do to help her. He told me they believed they’d eventually be able to remove the trach, and I was so excited and reassured.” 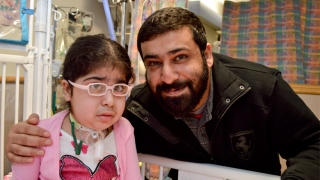 But there were other operations the team chose not to do. Having found new abnormalities in her heart, cardiac surgeons decided to avoid another risky procedure, as it was likely that Shaika’s heart would repair itself as she grew. They were right, and the little girl won’t require any additional surgery.

Since 2012, the Echtibis have made three trips to CHOP. In total, they’ve spent more than a year living in Philadelphia.

“Our home in the UAE is in the countryside, but we’ve found Philadelphia to be a safe, peaceful city," Hazza says. "We are respected at all times here.”

Shaika is now 5 years old, and has seen huge benefits from her treatment at CHOP. With help from physical and occupational therapists, she’s learned to walk.

Doctors plan to place a device that might help her speak. As she grows, her quality of life will improve even more.

“It took the combined efforts of many specialists to get Shaika where she is today,” says Dr. Lin. “Cases like hers don’t come around very often, but when they do, it’s critical that the child is treated in a hospital that specializes in managing multiple complex conditions at once. Our experience gave us the knowledge we needed to bring her back from the brink.”

Dr. Sobol adds, “Shaika has done remarkably well since her repair and continues to amaze me. Although she is not quite ready yet, I am confident that she will be able to have her tracheostomy tube removed in the future."

The medical team believes that they’ll be able to remove Shaika's tube between the ages of 10 and 14, and that she’ll be able to begin eating normally at that point as well.

“I’m unable to describe my happiness about the improvements my daughter has seen here at CHOP,” says Hazza. “From the International Medicine department, to the team on the PCU, they do an excellent job. Whenever I need anything, the interpreters don’t hesitate to help.

"We are so thankful to all the teams that worked with us and are thankful to our embassy and government," he adds. "I insist that all families be treated here. Excellent, excellent, 200 percent excellent!”