Vanessa Garcia was three months pregnant in 2004 when she arrived at her local hospital for a routine ultrasound. She was thrilled to become a mother and couldn’t wait for the first glimpse of her developing baby and all of the significant “firsts” to follow. 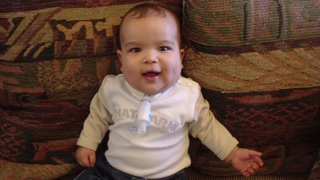 But the image on the monitor set Vanessa and her son on a course that would include milestones of a different sort: first heart surgery, first tracheostomy, first laryngotracheal reconstruction and first decannulation. To date, Steven has had over 35 medical procedures and 12 major surgeries.

Now, more than a dozen years later, the family is looking forward to the final “first”: the surgical closure of the tracheostomy hole Steven has had since infancy.

Diagnosis in the womb

That day in the ultrasound room, the technician noticed thickening in the back of the developing baby’s neck. A follow-up imaging test revealed serious heart abnormalities.

“I was terrified,” Vanessa remembers. “I was 19 years old; it was my first pregnancy. You expect this wonderful thing and instead get devastating news. I just went home and cried for months.”

Vanessa transferred her care to the Hospital of the University of Pennsylvania, which sent her to be followed closely by the Fetal Heart Program at Children’s Hospital of Philadelphia. Further testing revealed that Vanessa’s baby had multiple complicated heart defects. The baby’s heart was flipped (heterotaxy), the main arteries were reversed (transposition of the great arteries), the right ventricle was underdeveloped (hypoplastic heart), and there were two large holes (ASD, VSD) between the pumping chambers of the heart, making it unable to supply the body with oxygenated blood. Dates were scheduled to induce labor and delivery, and to perform the first of three major surgeries needed to reconfigure the newborn’s heart and circulatory system.

Steven was born at the Hospital of the University of Pennsylvania in January 2005, weighing 6 pounds, 1 ounce. He was immediately transferred to the Evelyn and Daniel M. Tabas Cardiac Intensive Care Unit (CICU) at CHOP where a medication called prostaglandin was pumped through a catheter in his umbilical stump to maintain an adequate oxygen level in his blood until he was stable enough for his first heart surgery at four days of life.

For those first four days, his mother was able only to touch his small body carefully while avoiding the tubes that kept him alive. Finally, one hour before surgery, she was allowed to hold him.

“I didn’t want to let him go; I didn’t even feel like he was in the hospital anymore, it was just me and him,” she says.

The first heart surgery was successful, but Steven suffered a complication. He had breathing difficulties and was diagnosed with bilateral vocal cord paralysis and scarring in his airway immediately below the vocal cords, which is called subglottic stenosis. So Ian N. Jacobs, MD, Medical Director of the Center for Pediatric Airway Disorders at CHOP, performed a tracheostomy to help Steven breathe.

Two caregivers were required to learn how to care for Steven before he could safely go home. Vanessa had no idea how much would be involved in being a new mother of a medically fragile baby with a trach. She was fortunate to have her mother’s support as Steven’s secondary caregiver. They had to learn how to care for Steven’s tracheostomy and ventilator needs. In the midst of their training it was discovered that Steven’s intestines were not positioned correctly (malrotation). He needed another emergency surgery. At this same time, it was found that Steven didn’t have a spleen and would require lifelong antibiotic therapy.

Before discharge Steven required a feeding tube (nasogastric tube) to deliver the extra nutrition he needed. Vanessa had to learn how to insert the feeding tube and use the feeding machine, in addition to the trach care and ventilator needs.

Steven spent nearly five months in the hospital before he was able to go home and be with the rest of his family.

“My mom and I felt like our life was turned upside down,” said Vanessa.

Life with a trach

Steven was an active baby. His mom held the ventilator aloft and followed behind him as he crawled through their home, but switched him to a baby swing or other stationary toy when his breathing became labored. His outings consisted of preparation that seemed as if they were going on a deep-space expedition, packing the stroller with Steven’s ventilator, a car battery to power the ventilator, an oxygen tank, a machine to measure his oxygen level, a suction machine and a feeding pump, along with all the regular baby supplies.

Steven’s mother worked closely with his critical care doctor to wean him off the ventilator. By nine months, he was breathing through the trach tube on his own and was taking his full feeds without the feeding tube.

When Steven was 2 years old, Dr. Jacobs performed his first airway reconstruction surgery. He used a small piece of rib cartilage to enlarge the scarred area. One year later, Steven was able to have the trach tube removed, which is called a decannulation. The family was elated, but the success was short-lived. Steven’s body slowly absorbed the cartilage graft. The trach tube was replaced eight months later to help him breathe.

Upon further testing it was discovered that Steven had severe acid reflux. The reflux had played a role in the failure of his airway surgery. Steven required multiple GI procedures to get this under control before Dr. Jacobs could make another attempt to repair the airway. Two years later, Steven underwent the same airway surgery with the same disappointing results.

Steven was 6 years old when he had his third and final heart surgery, but he still needed the trach to breathe. The third heart surgery completely reconfigured Steven’s heart and circulatory system. For the first time in his life, his oxygen level rose above 92 percent. His energy level was now as high as any other kid’s, but the trach held him back, physically and socially. He was the only kid who came to school with his own nurse. He would try to run and play at recess, but would be sidelined by coughing fits. The nurse would have to step in to suction his trach tube.

“I think it scared a lot of the kids. They didn’t invite him to play much,” Vanessa says. “He had one kid say he could play with them once he got that thing out of his neck.”

And getting that “thing” out was the goal of Steven’s care team. In 2011, Dr. Jacobs widened Steven’s airway by doing a partial vocal cordotomy: this surgery uses a laser to remove a small segment of one of the vocal cords to allow more air to pass through. 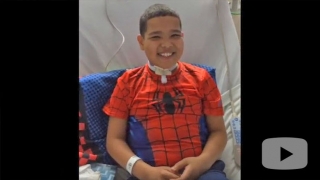 Watch as Steven removes his trach for the final time!

Two years later, he further widened the airway by pulling one of Steven’s vocal cords to the side with a stitch in a procedure called a vocal cord lateralization. The following year, Steven had his tonsils and adenoids removed to make more space in the back of his throat. Then finally, in 2015, Dr. Jacobs was able to decannulate Steven for the third and final time.

“Removing the trach was such a big step for him because it affected his body image, his self- esteem. Getting the trach out allowed all of that to flourish; he didn’t feel like he was so different anymore,” Vanessa says.

Breathing easy and helping others 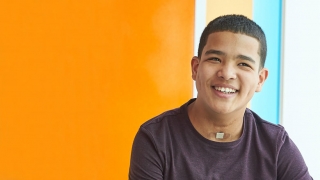 Now a sixth grader, Steven has come a long way from the days when physical activity would leave him gasping for breath. He keeps up with his friends and takes classes in martial arts. For now he wears an adhesive bandage over the trach hole. Eventually, that, too, can be surgically closed.

Steven’s life encouraged Vanessa to earn her nursing degree and two years ago, she accepted a position as a nurse at Children’s Hospital. Purely coincidentally, she was hired to work in the Progressive Care Unit, where she trains parents to care for their children’s tracheostomies.

“They had no idea I was the parent of a kid who had a trach,” Vanessa says. “It came full circle. I guess it was meant to be.”