David, 16, is an athletic kid who has always loved sports, with a special passion for hockey. He has no memory of the surgery that repaired his heart when he was a baby, but he appreciates the follow-up care he has received over the years from Children's Hospital of Philadelphia (CHOP).

Shortly after David was born, his doctor detected a heart murmur. His parents, Robin and Chuck, were advised to bring him to Children's Hospital of Philadelphia (CHOP) for consultation with a cardiologist.

A large hole in his heart

Within a week, David was at CHOP being examined by a pediatric cardiologist. Additional tests, including an echocardiogram, revealed that David had a large hole and several smaller holes between the two lower chambers of his heart, a condition known as ventricular septal defect (VSD). A VSD makes the heart work harder because of the extra blood flow to the lungs.

When VSD openings are small, they often close naturally as a baby's heart grows. But the holes in David's heart would require surgery. The longer they could wait for that surgery, the bigger he would be, and the greater the likelihood of a successful outcome. CHOP cardiologist, Alexa Hogarty, MD, followed him closely and proposed a plan of monitoring for the next few weeks while treating him with anticongestive therapy.

Robin and Chuck cared for David at home, bringing him to his local pediatrician and cardiologist near their home in Harleysville, PA for frequent examinations. His vital signs, symptoms, and weight were shared with the cardiology team at CHOP.

By age two months, David had stopped gaining weight. The cardiology team at CHOP decided that it was time for surgery.

David was scheduled for surgery with Thomas Spray, MD, Chief of the Division of Cardiothoracic Surgery. When the operation was complete, Dr. Spray explained that he had successfully closed the large hole and the smaller holes in David's heart with a patch. David would continue to have a minor heart murmur, but his circulation was greatly improved.

“His color changed. His breathing was better. He had more energy.”

That was the only heart surgery David needed to correct the VSD. Robin and Chuck brought him to see Dr. Hogarty for follow-up visits at CHOP's Specialty Care & Surgery Center, Bucks County, and Specialty Care Center in Exton, PA. Over time, the frequency of those appointments decreased from every three months, to once a year, to the current schedule of once every two years.

A passion for hockey 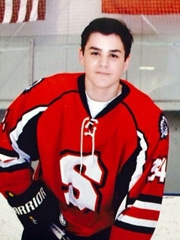 Growing up, David was an active child who grew to love sports. Over the years, he has played baseball and football and wrestled. But his greatest passion is hockey.

"From the time he was little, he always wanted to play hockey," says Chuck.

Now 16, David is on his high school's varsity hockey team. He's an outgoing kid who loves spending time with people. He also likes computers and gaming, and has built his own computers from parts. At 5' 11" and almost 200 pounds, David has come a long way since his heart surgery with Dr. Spray as a tiny fragile baby.

David and his older brother, Reese, are giving back to CHOP with a unique fundraising effort. They are organizing a supercar show to be held in Harleysville, PA, on April 21. Attendees will have a chance to see high-end sports cars and hot rods, talk with the owners, shop from vendors and participate in raffles. All proceeds will be donated to the Cardiac Center at CHOP.

Looking back on that treatment and the years of follow-up care, his parents have only praise for the people they have worked with at CHOP.

"We are lucky that we live here," says Chuck. "When we go to CHOP, we see that patients come from all over the world. David has participated in five research studies over the years. We hope this will have a positive impact for future patients."

"They have been amazing," says Robin. "Every time we go and everyone we see."

“They are very attentive to each family, very caring and sensitive.”