A few months into sixth grade, Chedaya got a brand-new pair of sneakers. She loved them. But so did a girl in her class, who suddenly started bullying her about them.

Chedaya had never been in a fight. But when the girl challenged her over the shoes, she felt pressured to stand up for herself.

“I was scared, but I didn’t want to look scared,” Chedaya says.

She met the girl in a park near school, where she was punched in the face, stomach and legs, and her braids were pulled out. Another student filmed the fight and shared it with classmates.

Her mom arrived to find Chedaya physically and emotionally shaken.

Catina took Chedaya to CHOP’s Emergency Department (ED), just a short drive away. In many other emergency rooms, Chedaya likely would have been treated for her physical wounds and sent on her way. But in CHOP’s ED, while a medical team cared for her physical symptoms, a social worker also tended to her emotional ones, connecting the family with CHOP’s Violence Prevention Initiative (VPI).

Aggressive behavior is a common issue facing today’s youth, involving almost one-third of adolescents. VPI’s program for assault-injured youth capitalizes on the teachable moment for youth ages 8 through 18 who seek medical care in the ED after a violent event, in an effort to reduce re-injury and retaliation. It’s just one aspect of VPI, a Hospital-wide effort to interrupt the cycle of youth violence, which also includes programs in schools and the community. With a multidisciplinary team made up of some of the nation’s foremost experts in violence intervention, anti-bullying methods and trauma-informed care, CHOP is uniquely positioned to take on this issue and is fast becoming a national model for hospital-led youth violence prevention.

For its part, the ED-based program provides emotional and social support for youth and their families through intensive case management services, helping youth exposed to violence deal with their emotions and reactions to difficult social situations, and increasing self-esteem and leadership skills. By applying a trauma-informed approach, previous traumatic experiences families bring with them to this recovery process are considered, which can impact how they respond to supportive efforts.

“Violence is cyclical,” says CHOP Violence Prevention Supervisor, Laura Vega, MSW, LSW. “It is our goal to interrupt that cycle so that healing can begin.” 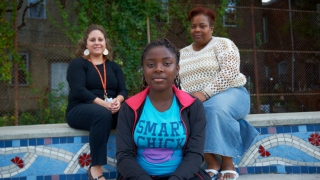 The fight left Chedaya feeling a confusing mix of emotions, from sad and fearful to angry and vengeful. Vega connected her with an individual therapist focused on trauma, as well as a group therapy program with other adolescent girls who had been through similar experiences.

Through individual therapy, Chedaya wrote a book about some of the hardships she’s overcome in her life, with a chapter that details her violent experience. The program also worked with her mom to help her understand what Chedaya was going through, which has helped improve communication between mother and daughter.

“Often when adolescents are victims of violence, it is difficult for them to share and communicate with their parents,” says Vega. “This intervention really helps the parent know what the child is experiencing, and it builds an open communication between them so that the parent can better support their child through this event.”

Chedaya is now a freshman at a charter school in Philadelphia and has dreams of becoming a doctor or lawyer.

“I'm better than where I was. A lot better,” she says. “I have more people I can trust and I feel like I could talk to my mom about anything now because our trust and communication is strong now.”

“Chedaya was really pressured into having to face this other girl at this playground and didn't feel like she had other options,” adds Vega. “Through our program and the group and her hard work in therapy, Chedaya really understands now that there are so many options, and that she has an ability to assert herself and her needs and deal with things in nonviolent ways.” 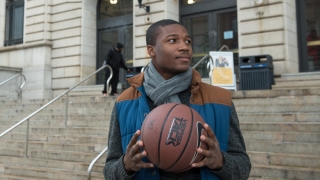 After suffering a violent assault, Liam turned to CHOP for help. 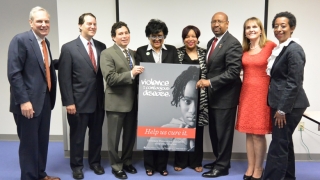 Interrupting the Cycle of Violence

In May 2014, CHOP officially launched the Violence Prevention Initiative (VPI) — a CHOP-wide effort to interrupt the cycle of violence. 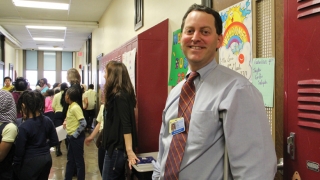 A team of psychologists and social workers at CHOP are changing the way children think and act in hopes of putting an end to the bullying epidemic.