Xiomara was born extremely preterm, with severely underdeveloped lungs. Despite nine months in intensive care, her health did not improve. Then, her care was transferred to Children’s Hospital of Philadelphia, where the Newborn/Infant Chronic Lung Disease Program “saved her life and gave her a chance at a normal childhood,” says her mom. 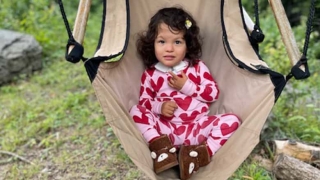 Michelle and Rodrigo experienced a difficult pregnancy complicated by preeclampsia, followed by labor at just 23 weeks and six days gestation. Then they learned that their extremely premature newborn daughter, Xiomara, would be in the neonatal intensive care unit for months.

Xiomara was born as what’s known as a micro-preemie. Her lungs were severely underdeveloped. As a result, she was at very high risk for developing chronic lung disease of prematurity, also known as bronchopulmonary dysplasia (BPD). She was quickly intubated and transferred to the NICU at her birth hospital in New York City.

Soon after, she was extubated and placed on continuous positive airway pressure (CPAP). CPAP did a great job of alleviating the burden of breathing so Xiomara’s fragile lungs could grow, and over the next six months, her health remained relatively stable.

A cycle of illness leads to a transfer of care

Things went downhill unexpectedly during the usual and anticipated attempts to transition Xiomara off CPAP and onto nasal cannula with supplemental oxygen. Xiomara came down with severe pneumonia and needed to go on antibiotics. Her health improved after a few weeks on the antibiotics, so she was tapered off them. But then, just a few weeks later, she was sick again. Xiomara fell into a vicious and chronic cycle of critical illness. Each time it seemed she was finally better, she would take additional steps backward.

“It was terrifying,” says Rodrigo. “It kept happening, and more frequently.” 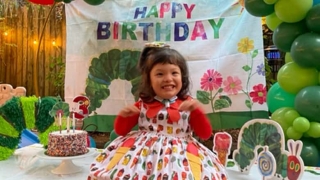 After nine months in the NICU, Xiomara was back on the ventilator, on 100% oxygen and was at the most unstable point since her birth. She had global developmental delays, was suffering from the most severe form of BPD, and had developed pulmonary hypertension.

Rodrigo and Michelle were in anguish, unsure about their baby girl’s future, when an on-call physician at the hospital pulled them aside.

“He said to reach out to Children’s Hospital of Philadelphia to get a second opinion; that this is what they are known for,” says Michelle.

The couple researched Children’s Hospital of Philadelphia (CHOP) online and learned they are home to the Newborn and Infant Chronic Lung Disease (NeoCLD) Program, one of only a few places in the world able to provide specialized care for infants with such severe cases of BPD.

They called the program and spoke with the Medical Director, Kathleen Gibbs, MD. When Michelle asked if the program could handle transporting a baby on 100% oxygen via helicopter, Dr. Gibbs’ response gave her great comfort.

Within 24 hours, 9-month-old Xiomara was picked up by the CHOP Transport Team — “her angels,” as Michelle calls them — and admitted to CHOP’s Harriet and Ronald Lassin Newborn/Infant Intensive Care Unit (N/IICU). Her parents drove south to Philadelphia to meet her at the hospital. By the time they arrived to the N/IICU waiting room, Xiomara’s oxygen support was already down to 40%.

“We couldn’t believe it,” says Michelle. “It was a different level of care based on years of research and expertise and a really gigantic team. They’re amazing.”

Xiomara still had a long road ahead of her, but thanks to the Program’s cautious approach to care, her health steadily improved from Day 1 at CHOP until her discharge six months later. During that time, Rodrigo and Michelle were struck by the Program’s total team approach to care. The entire team met weekly to present and provide input on each case. The team also took direction based on input from the parents.

“It’s a global effort for these kids,” says Rodrigo. “There’s a lot of communication.”

With every passing day, Xiomara was able to interact more with her parents. Despite the many tubes and wires connected to her, the care team encouraged Rodrigo and Michelle to hold her as much as possible. It was just one more indication of the CHOP team’s comfort level caring for children like Xiomara.

Supporting families through discharge and beyond

About two months before Xiomara was discharged home, her parents received rigorous training on how to care for her tracheostomy tube and home ventilator, something the NeoCLD Program is known for. That training proved invaluable when the family returned home to Brooklyn at the onset of what would become the raging COVID-19 pandemic and were unable to secure the home healthcare support they had expected to receive from a nurse and respiratory therapist.

Yet again, Rodrigo and Michelle rolled with the punches. With support from their CHOP NeoCLD team, they served as Xiomara’s sole care providers. 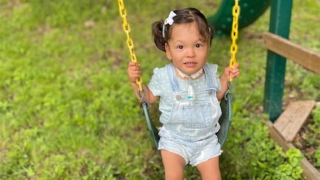 After only eight days at home, both parents contracted COVID. Through an abundance of protective gear and careful interactions with Xiomara, she did not contract the virus. During one of their scheduled check-ins with the Pulmonary team, there was concern over Xiomara’s oxygen requirements, which were growing unexpectedly. New York City hospitals were already overwhelmed with COVID patients. Xiomara was admitted to the hospital in Manhattan where she was born, but that hospital was struggling with the inflow of COVID patients. So, the CHOP Transport Team picked her up and transferred her to their care. Rodrigo and Michelle reached out to their original CHOP social worker, who helped them secure nursing support in Philadelphia, and they relocated back to Philadelphia temporarily.

Xiomara is now 3-and-a-half years old. She receives general pediatric care at CHOP’s Karabots Center in West Philadelphia and specialty care at the hospital in University City. She recently successfully weaned off the ventilator. The next step is to remove her tracheostomy tube, which the CHOP team plans to do before she turns 4.

She continues working to overcome developmental delays, with regular speech therapy, physical therapy and occupational therapy sessions. Despite all the health struggles she’s faced since birth, her parents say she has remained an extremely happy little girl.

“For all the things she’s had to endure, she’s still a happy baby,” says her mom. “It gives us comfort knowing she is in the best hands. That’s why we continue to go back [to CHOP]; because we know there is excellent care there. They saved her life and gave her a chance at a normal childhood.”