An inspiring one-year update on Zion Harvey, the recipient of the first bilateral hand transplant in a child.

Zion's hands and feet were amputated when he was 2 as the result of sepsis, a life-threatening infection. He received new hands in July of 2015, during a 10-hour surgery at The Children's Hospital of Philadelphia. The surgical team was led by L. Scott Levin, MD, and Benjamin Chang, MD, who direct the Hand Transplantation Program at Children's Hospital.

This update shows Zion's progress in the year since the surgery.

Dr. Levin: I want to introduce to you Zion Harvey and his mom Pattie Ray.

Tell me what you told me last night at the playground about writing a letter. Because that was very special to me. What did you want to do?

Zion: I just wanted to write a letter to the parents of … for giving me their son's hands because they didn't have to do that if they didn't want to.

Dr. Levin: You're right, that's very special. You know that? And the fact that you wanna talk to other kids who might have this, is really special to me, that's really, really pretty amazing. And you know what? You're gonna help a lot of people. That's what we hope. We wanted to help you first but you're gonna help a lot of people. Did you know that? And I don't mean the Baltimore Ravens.

Dr. Levin: I think from an emotional standpoint, he remains a remarkable young man because here, we've had weeks of hospitalization, a daily request for him to interact, to do therapy, to undergo testing, to interface, and again, there's never been one iota of resistance where I don't want to today, or I don't feel like, or things that we might hear from an adult, let alone a child.

Physical therapist: Try to open that thumb up.

Unknown speaker: Don't be getting too comfortable; you're like about to sleep

Dr. Chang: I can't remember any child of his age who's been this mature; always with a great disposition.

Christine McAndrew, PA-C: I would say pre-operatively, he was very motivated and excited about the transplant, but post-operatively, we were incredibly impressed by Zion's positive attitude and his continued motivation to go through therapy. And I think we can see how proud he is of where he is at today.

Music therapist: Music time is over so it’s time to sing goodbye, goodbye … You know this.

Dr. Levin: Let me sit down here with you. Can I take a look at you? I wanna sort of look at his function now, so let's take these off buddy.

To see him, you know, start to hold objects, scratch his nose, shake hands goodbye, his function's far from normal, but in a very short time he's demonstrating that the tendons and the joints and the muscles that we've attached to these new hands, his brain is communicating with his hands. His brain says for his hands to move and they move. And that in and of itself is remarkable because for six years of his life, that part of his brain, if you will, was asleep. There were no hands to activate. There was no feedback in any way, shape or form, visually or from his joints that he had a hand.

Now, let me see that thumb wiggle again. Whoa, that is the best yet.

Pattie: It's not weird to see him with the hands, it's just, it's just like an old feeling coming back. You know. Like if you've ever loved someone some type of way and then, you see him like, oh, it's rushing back all again. There it is, that's how I feel about his hands. You know. It's like an old feeling cause it's not weird cause I've seen him with hands, you know. So it's just like, all that little gooey stuff you feel for your baby, rushing right back in. I just wanna hold his hands and touch him and kiss him and love on him. That's what it feels like.

Dr. Levin: Today is a celebration of what we do at CHOP, but most importantly it's a celebration about our buddy Zion, OK. So, we wanna have a little pizza party for him and have you see the end result of what we started here.

Dr. Levin: I would say if we did hand transplants and he couldn't do anything other than look at his hands and they were pretty looking hands, but they didn't function, we would abjectly fail him. But it's quite the opposite. He's writing, he can feed himself, he's learning how to button. I saw him zip up his zipper today. So he's gaining independence, which is the entire reason why we do this.

Christine McAndrew, PA-C: Zion's hands do grow with him, and we make sure that when we do the surgery, the growth plates stay open so that his hands will grow with him. It's only been eight months but we can see that the size is proportional.

Dr. Chang: More than eight months since we did the transplant, he's made tremendous progress. I mean, it took over a month before he could leave the hospital and go to rehab. Now he's transitioned to home with his family.

When we initially did the hand transplant, we used some of the skin from the donor and some from Zion, but we saved a lot of extra skin between the two of them so that we could accommodate for swelling after the surgery. And so once the swelling has gone down as it has, there's some extra skin, and we do plan to go back at a later date, usually at least a year out from surgery, to take out some of the extra skin and improve the contour.

Physically, all the things that we repaired have healed, so he's really in fulltime rehab mode right now. I think just how incredibly well he's done with getting through the ups and downs of the recovery and the rejection episodes and some illnesses that he's had over the winter just like any other kid. But he and his family have managed it so well, you know, beyond our expectations.

Pattie: We have a very, very special and intricate bond; from sleeping in hospital cribs together; you know, not many people can relate to that, you know, always waking up and their mom being there, you know, and never leaving. So you know, I respect the bond and I know, you know, if he does … if he is clingy at times, cause he can be. Sometimes he doesn't want me to go.

Zion: I owe everything to my mom because she helped me when I was through the roughest times of my life. My mom said, you have to learn to do it by yourself before you ask somebody to do it for you. She's the best mom I ever had.

Pattie: You know, he's become this independent person that doesn't need me around all the time. He takes his meds on his own now. Get it like, what am I here for now? That's how I feel, like, oh my goodness, is he not gonna need me next year? It's very bittersweet. I'm happy for him.

The one thing that's different is, instead of having no hands, I have two hands, and everything else is the same. My friends haven't changed, they haven't treated me any different. I'm still a kid; I'm still the same kid everybody knew without hands.

I am always independent and always will be. So, when you see more of Zion Harvey in the future, always remember he was always an independent boy.

Zion: Thank you, thank you

I'm looking at my wheelchair right now and I'm … I'm remembering that when I needed it, it was always there, but now, I got one left hand and one right hand, they can always help me when I fall down. I'll get back up.

There's one thing, if any kid is watching this, and you're going through a rough time, never give up on what you're doing. You'll get there eventually. 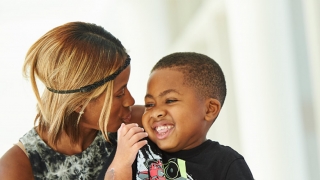 One year after Zion's hand transplant surgery, Children's Hospital shares an update on his progress.