The 75-mile hike was the last straw. Adam Bengis had endured months of swollen lymph nodes that doctors attributed to a virus, but when he felt strangely weak on the long hikes at Boy Scout camp, Adam knew something was really wrong. 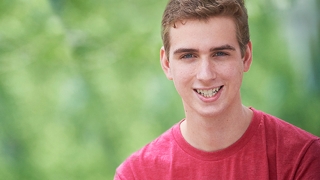 He had gone online before and googled “lymph nodes popping out, tired, weak.” He saw cancer as a possibility, but it seemed so remote. “I’m a teenager,” says Adam. “This doesn’t happen to teenagers.”

But it does. Tests confirmed that just shy of his 16th birthday, Adam had T-cell acute lymphoblastic leukemia. For the next 29 days, he lived at The Children’s Hospital of Philadelphia as he received chemotherapy. His eyes were opened to a whole new world.

“I started thinking to myself, ‘Cancer really is something that affects thousands upon thousands of young people,’” says Adam, now 17 and on maintenance treatment.

That’s why he is committed to being an ambassador for the 2015 Four Seasons Parkway Run & Walk. Adam and his friends and family will be among the crowd of people at Lincoln Financial Field on Saturday, Sept. 19 to raise money and awareness for pediatric cancer research and survivorship programs at The Children’s Hospital of Philadelphia.

Running is something that has taken on new meaning in Adam’s life. “Of all the things that I'm starting to recover, the one thing that I'm really, really happy to have back is being able to run,” he says. Not that he’ll ever be a serious runner, but after not being able to keep up with his friends — he could barely stand after his initial hospital stay — he has a new appreciation for his ability to move fast.

“It’s going to be hard.  And every step of  the way is not going to seem easier. But once you make the gains that you need to make to get better, you'll look back at them and be proud that you did.”