What are autism spectrum disorders?

Autism spectrum disorder (ASD) is a complex neurological and developmental condition that usually appears during the first three years of life. Symptoms can range from mild to severe and vary with each individual. For instance, some children may rarely use words to communicate, while others may hold extensive conversations and use rich language. Some children may not like to be hugged or touched, while others seek out and enjoy physical touch.

ASD can express itself in different ways, but it's characterized by difficulties with social communication and unusual or repetitive interests and behaviors. Children with mild ASD can have a hard time learning social skills that come easily to other children, such as making eye contact, having back-and-forth conversations, coordinating language with nonverbal communication, or learning through social imitation. Children with severe ASD seem to inhabit their own world — a world that can sometimes seem closed off to relatives and friends.

Autism spectrum disorders currently go by many names – autism, Autistic Disorder, Asperger Syndrome, and Pervasive Developmental Disorder Not Otherwise Specified (PDDNOS). In May 2013, the term "Autism Spectrum Disorder" will be adopted by the Diagnostic and Statistical Manual of Mental Disorders, 5th edition (DSM-5), to replace all these names. This reflects the substantial research concluding that all autism spectrum disorders are characterized by marked deficiencies in social interaction and communication, and various behavioral issues, though their individual presentations may vary.

One in 88 children in the United States has autism spectrum disorder (ASD), including 1 in 54 boys. That makes autism the fastest-growing developmental disability in this country.

Though ASD research has advanced significantly in the past decade, it is still not known exactly what causes the disorder. It’s likely that there are multiple causes, and thus multiple “autisms.” For example, several hundred genes have been associated with autism spectrum disorder, and they may interact in a complex manner with each other and with the environment.

We do know that ASD is not caused by psychological factors, parenting behaviors or practices, or vaccines. Research has helped to identify and diagnose ASD at younger ages, resulting in earlier access to specialized early intervention services for children on the autism spectrum.

Researchers at the Center for Autism Research at The Children's Hospital of Philadelphia are studying the underlying causes of ASD and using that information to develop more effective treatments for children with the diagnosis.

Although the symptoms of autism vary in severity, there are two major categories:

Children with autism spectrum disorder often struggle with nonverbal communication behaviors (for example, making eye contact, reading, and using facial expressions and gestures) that come naturally to other children. Their relationships with peers are often affected because of difficulties understanding and performing reciprocal (back and forth) social interactions. These struggles are often intensified by difficulty reading or responding to other people’s emotions.

Some children with autism spectrum disorder may flap their hands or rock back and forth, repeat lines from books or movies, or have strong or muted reactions to sensory stimuli (for example, smell, sound, or touch). They may have a particular interest or hobby that is unusually intense compared to those of other children their age. Children with ASD may insist on certain routines or patterns in everyday life or want to play with toys in atypical ways (for example, spinning the wheels of a toy car rather than “driving” it).

There is no biological test for autism spectrum disorder. The diagnosis is made when a physician or psychologist identifies ASD characteristics through directly observing the child and gathering a developmental history. The key to helping children with autism spectrum disorder overcome some of the challenges they face is to get a diagnosis early and begin addressing any areas of need.

Researchers are studying the very early signs of ASD, but it is currently very rare for a child to be diagnosed before 12 months of age. While children develop at different rates, parents should speak with their child’s doctor if they notice the following by 18 months of age:

Standard guidelines have been developed to help diagnose children before they reach 2 years of age. The American Academy of Pediatrics (AAP) recommends that all children be screened for autism spectrum disorder at 18 and 24 months. Screening is usually performed by using the Modified Checklist for Autism in Toddlers (M-CHAT). The M-CHAT asks parents to answer 23 yes/no questions about their child’s play, use of gestures and interactions.

Sometimes children with ASD are not identified when they are toddlers. This is often the case when a child is intellectually very bright and verbal. Individuals with what is sometimes called “mild autism,” “high-functioning autism,” or “Asperger Syndrome” are often not diagnosed until later in childhood, or even adolescence or adulthood. Researchers believe the underlying biological disorder is the same regardless of when symptoms are noticed, and there can be a wide variety of clinical presentations and a wide range of severity associated with ASD.

Services for adults with ASD and their families, while not as widely available as they need to be, are growing in number. They include social coaching, job training, financial assistance and accommodated living arrangements in regular communities.

Watch this video to learn about ASD research at CHOP and advanced care for children with autism spectrum disorder. Find out how you can help your child's healthcare team prepare for your child's visit, and what to bring to your child's appointment.

Find more information on how to prepare for a sedation or general hospital visit for children with special needs.

Learn how to schedule your child’s initial autism evaluation, what to expect, and what you can do during the waiting period. 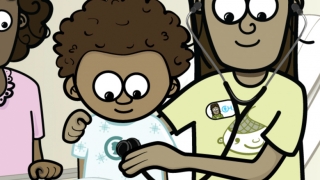 Preparing Your Child for a Trip to CHOP

This step-by-step guide — designed specifically for children with autism — explains what kids can expect during a visit to CHOP.