What is plastic bronchitis?

Plastic bronchitis is a lymphatic flow disorder that causes severe respiratory issues. In children with plastic bronchitis, lymph fluid builds in the airways and forms rubbery or caulk-like plugs (known as casts). These casts block the airways, making it difficult to breathe.

Lymphatic flow disorders refer to a group of diseases characterized by abnormal circulation of lymph fluid. Lymph vessels carry lymph fluid to veins, where it returns to the bloodstream, playing a crucial role in immune function and fat and protein transport.

Injury to the thoracic duct (the main lymph vessel), congenital abnormalities or excessively high venous pressures can result in lymphatic flow problems and leakage of lymphatic fluid into the chest, abdomen or other body cavities. In plastic bronchitis, the abnormal circulation causes lymph to leak into the airways.

Plastic bronchitis is most prevalent in patients with certain forms of congenital heart disease who have had the Fontan surgery and those with lymphatic abnormalities. It can also be associated with certain lung diseases, infections, and (very rarely) allergies.

The accumulation of material in the airways leads to airway obstruction and respiratory symptoms such as cough and oxygen deprivation (hypoxia). In many cases, the early symptoms are nonspecific and can resemble asthma.

Patients with plastic bronchitis have difficulty breathing and are prone to uncomfortable coughing fits. During these fits, they may cough up the casts. The casts often return within days, as more lymph fluid leaks into the airways. In severe cases, plastic bronchitis can lead to asphyxia (suffocation).

Testing and diagnosis of plastic bronchitis

Historically, plastic bronchitis was diagnosed when patients coughed up cast material or cast material was found during bronchoscopy, a procedure used to look inside the airways and lungs. Other tests, such as chest X-ray, can show that the affected lung is not expanding normally, but this is not a diagnostic finding by itself.

Plastic bronchitis is treated by a team of experts that specialize in lymphatic imaging and interventions. At The Children's Hospital of Philadelphia, patients have access to a specialized Jill and Mark Fishman Center for Lymphatic Disorders. Treatment depends on the exact cause and the patient’s anatomy.

In all patients, the first step involves careful mapping of the anatomy and flow of the lymphatic system. This is done using a specialized MRI technique called dynamic contrast MR lymphangiography. During this procedure, an MRI contrast agent is injected directly into the lymphatic system.

After the MRI procedure a small catheter is placed into the main lymphatic channel, called the thoracic duct, to further outline the abnormal ducts that are surrounding the airway.

After the abnormal ducts are identified, they are sealed using a procedure called selective lymphatic duct embolization. Your or your child’s doctor will use oil, coils, particles, glue or other bonding agents, inserted through a tiny tube (catheter), to seal the ducts.

With this procedure, they are careful not to block the main thoracic duct if possible, an approach that experts at CHOP believe is important for the success of this procedure. Because lymphangiography allows clinicians to pinpoint the exact spot of the leak, they can target their intervention to the affected area, preserving the thoracic duct.

The treatment of plastic bronchitis in patients with heart disease may also include cardiac interventional procedures such as balloon dilation, stent dilation of a narrow vessel, or embolization of an abnormal blood vessel with coils.

You or your child may also be prescribed medications that can reduce inflammation, lower venous pressures or dissolve the casts. 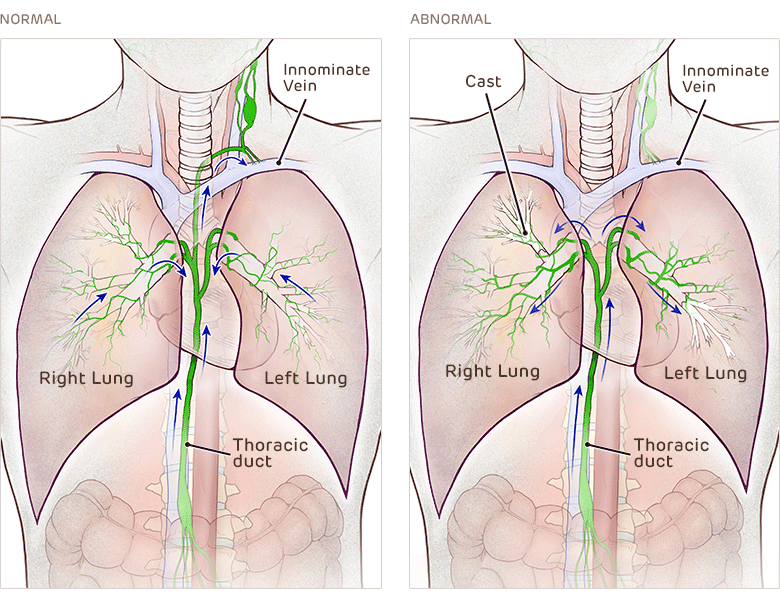 New treatment options are showing promising results. Lymphangiography and lymphatic duct embolization have been shown to resolve casts and coughing and respiratory symptoms.

Follow-up care will be managed primarily by your or your child’s primary physician in coordination with the physicians from the Jill and Mark Fishman Center for Lymphatic Disorders for specific treatments like medication changes or medication weans. In patients with certain types of congenital heart disease, follow-up care will also be managed in coordination with CHOP’s Single Ventricle Survivorship Clinic, part of the Fontan Rehabilitation, Wellness, Activity and Resilience Development (FORWARD) Program.

The cause of plastic bronchitis was discovered by lymphatic experts here. These experts also developed selective lymphatic embolization and dynamic contrast MR lymphangiography, a minimally invasive procedure used to treat the condition. We are currently the only center in the world to offer this new treatment.

A research team has revealed the role of leakage from the liver lymphatic system and used a novel procedure to seal off those leaks.