What are skeletal dysplasias

Skeletal dysplasias are a complex group of bone and cartilage disorders that may affect the fetal skeleton as it develops in utero.

As a whole, skeletal dysplasias are not common. They affect one in every 4,000-5,000 births, although the incidence may be higher since the symptoms may not manifest until early childhood, when short stature, joint abnormalities or other complications arise. 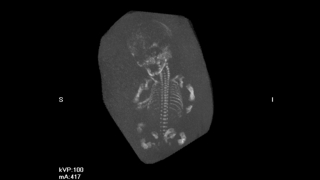 CT scan showing a fetus with skeletal dysplasia To date, more than 350 distinct skeletal disorders have been described which may result in numerous anomalies in the shape and size of the skeleton.

Some common symptoms of skeletal dysplasias include: 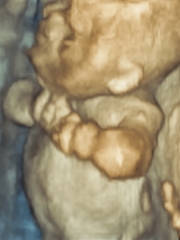 The causes of skeletal dysplasias are nearly as diverse as the number of distinct disorders. Generally, however, the causes can be cataloged into three groups:

The fetal skeleton is usually evaluated as part of a routine ultrasound around week 20 of the pregnancy.

If a skeletal dysplasia is suspected, the expectant mother will likely be referred to a facility that specializes in diagnosing, treating and caring for babies with congenital anomalies, such as the Center for Fetal Diagnosis and Treatment at The Children’s Hospital of Philadelphia.

At our Center, prenatal evaluation of skeletal dysplasias includes a detailed ultrasound of the fetal skeleton in the second or third trimester of gestation, and an extensive genetic family history work up.

Prenatal diagnosis of skeletal dysplasias remains challenging, especially when there is no family history of the disorders. This is because:

When the ultrasound exam demonstrates severe bone abnormalities and the diagnosis is indeterminate, a multidisciplinary team involving obstetricians, geneticists, radiologists and sonographers will assess if your baby is a candidate for low-dose fetal CT. Radiation dose is kept to a strict minimum, adhering to the principles of, or as low as reasonably achievable. Low-dose CT scans are only performed in the second and third trimesters of gestation, when fetal organs have already formed and developed, and never during the first trimester, when the fetus is most sensitive to radiation.

The CT scan includes only the part of the uterus where the fetus is. Once the scan is done, the images then undergo post-imaging computer-aided renderings to create multiple two- and three-dimensional pictures of the fetal skeletal system that depict the bones in exquisite detail.

Initial interpretation of the fetal CT is performed by pediatric radiologists who work closely with the Center for Fetal Diagnosis and Treatment and who have vast experience and expertise in prenatal diagnosis. The final diagnosis for each specific patient requires a multidisciplinary team including radiologists, obstetricians and geneticists.

By providing detailed visualization of the fetal bones, low-dose fetal CT allows us to provide improved parental counseling, pre-delivery planning and postnatal management in fetuses with a diagnosis of skeletal dysplasia.

But not all children with dysplasias have severe medical problems. Many of these children can live relatively normal lives.

It is recommended that children born with or later diagnosed with a skeletal dysplasia be treated by a multidisciplinary team of experts, such as the one at The Children’s Hospital of Philadelphia.

By working with a coordinated team of geneticists, neonatologists, radiologists, orthopedists, pediatricians and specialists, your child will receive individualized care that addresses your child’s health, developmental and psychosocial issues.