Blood vessel abnormalities may accompany a variety of genetic or inherited syndromes. Patients that present with vascular malformations will receive multidisciplinary care to ensure coordinated treatment for all of their symptoms.

Below are examples of some of the combinations and syndromes commonly associated with vascular malformations that we treat through the Divisions of Plastic Surgery and Interventional Radiology, with additional collaboration from Orthopaedic Surgery, Hematology and Otolaryngology when indicated. 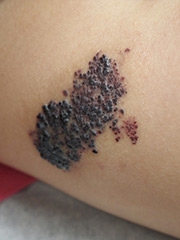 Patients may benefit from a combination of laser, sclerotherapy, and surgical debulking. Compression garments are often useful to control reoccurrence after treatment. 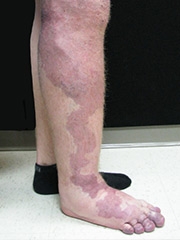 This condition is usually noted at birth, and leg involvement can result in a leg that is longer and larger in circumference than the normal side. There may also be a large lateral varicose vein.

Patients may have involvement that extends up the leg to involve the buttock and retroperitoneum, which can result in rectal or genital bleeding. The trunk and upper extremities can also be involved, and hand involvement can lead to overgrowth of the fingers.

An MRI scan will demonstrate the extent and depth of involvement of the vascular malformation, and it will also confirm the presence or absence of normal draining veins in addition to the dilated varicose veins. This becomes important if patients are candidates for sclerotherapy or endovascular laser coagulation, as they must have a separate normal venous system to maintain circulatory flow from the leg.

Compression garments are the mainstay of treatment to control progressive dilation of the abnormal veins and lymphatics and progressive swelling and overgrowth of the involved areas, as most patients are not candidates for aggressive debulking surgery. Non-steroidal anti-inflammatory medication may be useful for pain associated with intravascular clotting. Extensive involvement places patients at risk for localized intravascular coagulation and possible pulmonary emboli, and a series of clotting tests (PT, PTT, fibrinogen, d-dimer) may determine whether or not a referral to hematology is warranted to weigh the risks and benefits of systemic anticoagulation. 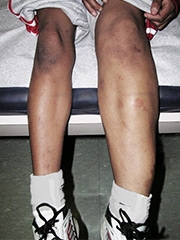 Parkes-Weber syndrome resembles Klippel-Trenaunay syndrome in that it is associated with a combination of abnormal vessels characterized by a patchy capillary vascular malformation (port wine stain) on the surface. Unlike KT syndrome, there is an underlying arteriovenous malformation. This means there is a high blood flow, high blood pressure malformation that may result in more significant overgrowth, a warmer skin temperature, and in severe cases, abnormal bleeding or high output heart failure.

Some cases have a genetic basis and a dominant inheritance pattern. In addition to an MRI and MRA scan, patients may warrant evaluation by our genetics division. Painful AVMs may warrant palliative embolization or surgical excision. 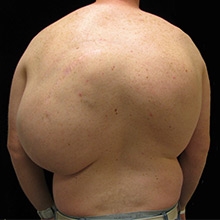 CLOVES is an abbreviation for a collection of anatomic abnormalities that may include congenital lipomatous overgrowth, vascular malformations, epidermal nevi, and spinal abnormalities. What is most striking are the extensive soft tissue masses of the trunk composed of excess fat and abnormal blood vessels, usually dilated veins and lymphatics. Patients may also exhibit epidermal moles and spinal or skeletal abnormalities. CLOVES syndrome is very rare and the cause is unknown.

Patients may benefit from sclerotherapy or aggressive debulking. The operations are long and tedious, and blood transfusion is common, but patients may derive significant benefit. In most patients, palliative improvement is the goal rather than complete cure, as these malformations are generally too extensive for complete removal. 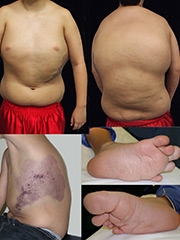 Proteus syndrome is a genetic disorder that results in skin and soft tissue overgrowth, abnormal bone development and vascular malformations. Because of the many deformities characterized by asymmetric overgrowth of the extremities and soft tissue masses, the syndrome is named after the Greek god Proteus, who could change his shape. It is believed that the Elephant Man, Joseph Merrick, actually had Proteus syndrome rather than neurofibromatosis. Additional physical characteristics include thickened, wrinkled skin on the soles of the feet and skull abnormalities.

Because the soft tissue contour abnormalities may be due to excess fatty overgrowth and/or vascular malformations, patients with Proteus syndrome may be candidates for sclerotherapy.

Patients with Proteus syndrome are monitored for possible tumors of the ovaries, testicles, and parotid salivary gland, as well as meningiomas. Evaluation by a hand surgeon is indicated for those with overgrowth of the upper extremity and fingers. 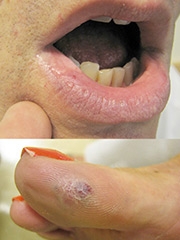 Also known as Osler-Weber-Rendu syndrome, hereditary hemorrhagic telangiectasia is a dominant hereditary condition characterized by the formation of abnormal vessels on the skin, mucous membranes, brain, lungs, liver and intestines. Significant and repeated episodes of bleeding may require treatment.

When the condition affects the nasal and oral cavity, otolaryngology is usually involved in treatment for endoscopy and cauterization. Cutaneous telangiectasias (spider veins) can respond to pulsed yellow dye laser therapy offered by dermatology or plastic surgery. When the intestines are involved, general surgery may be involved if bowel resection is indicated.

In some cases the interventional radiologist may be called to inject clotting chemicals into feeding vessels to control bleeding, especially in areas that may be challenging to approach surgically. 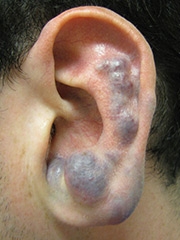 Blue rubber bleb nevus syndrome (BRBNS) is a hereditary form of venous malformations characterized by small clusters of dilated veins that occur predominantly in the skin and gastrointestinal tract. Treatment of problematic cutaneous and subcutaneous dilated veins may include sclerotherapy or direct surgical excision. Significant gastrointestinal bleeding that causes anemia is most effectively treated by bowel resection.