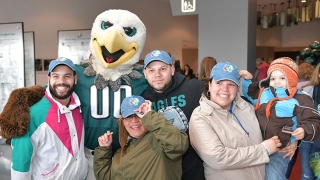 On Sunday, April 15, Lincoln Financial Field was transformed into a carnival-like atmosphere designed specifically with the needs of individuals on the autism spectrum in mind. The ninth annual Huddle Up for Autism, hosted by the Philadelphia Eagles and Children’s Hospital of Philadelphia, was open to children and adults with autism spectrum disorder (ASD), along with their friends and family members. The sold-out event raised more than $106,000 for the Center for Autism Research (CAR) at Children’s Hospital of Philadelphia.

“Year after year, we continue to be amazed by the outpouring of community support for a cause that is so close to our organization and to countless people around the world,” said Christina Weiss Lurie, President Eagles Charitable Foundation, Eagles Social Responsibility. “The Center for Autism Research at Children’s Hospital of Philadelphia has shown a tremendous commitment to the field of autism which has led to groundbreaking discoveries in genetics and interventions. We deeply appreciate their efforts and the charitable contributions of so many volunteers, donors and supporters that make Huddle Up for Autism a day to remember.”

Families were invited to explore the stadium locker rooms, take pictures with the Lombardi Trophy, meet Eagles players, and participate in interactive games with the Temple Football team. Sensory stations and quiet rooms were made available to families who needed a break from the action, and child specialists from CAR were on-hand to lend assistance when needed.

“We're grateful to the Eagles for their commitment to making this event possible each year,” said Robert Schultz, PhD, Director of the Center for Autism Research at CHOP. “For many families affected by autism, this is the only way that they can enjoy a day out at the stadium together, without the overwhelming sounds, sights and crowds of a usual football game. It’s a day that families and staff look forward to all year, and this year it's more exciting than ever to be celebrating with our World Champion Philadelphia Eagles. We are honored that the Eagles have made it a priority to fund autism research and clinical care programs at CHOP.”

The event also provided an opportunity for families to learn about resources and research opportunities with CAR, and to speak with some of the nation’s foremost autism specialists and researchers. The Eagles are committed to supporting cutting-edge autism research that will provide answers and guidance for families of children with ASD. In order to make significant progress in this area, children and adults are needed to join autism research studies, even if they do not have a form of ASD.

Autism is considered one of the fastest-growing developmental disorders in the country, as it affects 1 in 68 children. In fact, it is five times greater in boys, with a diagnosis taking place in 1 out of every 42 cases. The Pennsylvania Autism Census Update reports that 55,000 individuals in the state are currently receiving medical services for a form of ASD. According to the Centers for Disease Control and Prevention, there may be upward of 130,000 additional Pennsylvania residents living with autism who have gone undiagnosed and therefore, were left out of the reported total.

A growing body of research shows that the earlier a child is diagnosed with autism and begins accessing services, the better their outcome will be later in life. CAR is conducting research to discover the earliest “biomarker” or signs of autism, as well as developing novel treatments and therapies, with the goal of improving the quality of life for people with ASD not just in childhood, but over the course of a lifetime.

For more information on studies, resources and workshops for families at CAR, please visit www.CenterforAutismResearch.org  and www.carautismroadmap.org.

Check out photos from the event.