June 6, 2014 — A large new analysis of DNA from thousands of patients has uncovered several underlying gene networks with potentially important roles in autism. These networks may offer attractive targets for developing new autism drugs or repurposing existing drugs that act on components of the networks.

Furthermore, one of the autism-related gene pathways also affects some patients with attention-deficit hyperactivity disorder (ADHD) and schizophrenia — raising the possibility that a class of drugs may treat particular subsets of all three neurological disorders.

“Neurodevelopmental disorders are extremely heterogeneous, both clinically and genetically,” said study leader Hakon Hakonarson, MD, PhD, director of the Center for Applied Genomics at The Children’s Hospital of Philadelphia (CHOP). “However, the common biological patterns we are finding across disease categories strongly imply that focusing on underlying molecular defects may bring us closer to devising therapies.” 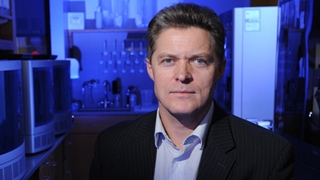 Hakon Hakonarson, MD, PhD The study by Hakonarson and colleagues, appearing online today in Nature Communications, draws on gene data from CHOP’s genome center as well as from the Autism Genome Project and the AGRE Consortium, both part of the organization Autism Speaks.

Autism spectrum disorders (ASDs), of which autism is the best known, are a large group of heritable childhood neuropsychiatric conditions characterized by impaired social interaction and communication, as well as by restricted behaviors. The authors note that recent investigations suggest that up to 400 distinct ASDs exist.

The current research is a genome-wide association study comparing more than 6,700 patients with ASDs to over 12,500 control subjects. It was one of the largest-ever studies of copy number variations (CNVs) in autism. CNVs are deletions or duplications of DNA sequences, as distinct from single-base changes in DNA.

The study team focused on CNVs within defective gene family interaction networks (GFINs) — groups of disrupted genes acting on biological pathways. In patients with autism, the team found three GFINs in which gene variants perturb how genes interact with proteins. Of special interest to the study group was the metabotropic glutamate receptor (mGluR) signaling pathway, defined by the GRM family of genes that affects the neurotransmitter glutamate, a major chemical messenger in the brain regulating functions such as memory, learning, cognition, attention and behavior.

Hakonarson’s team and other investigators previously reported that 10 percent or more of ADHD patients have CNVs in genes along the glutamate receptor metabotropic (GRM) pathway, while other teams have implicated GRM gene defects in schizophrenia.

Based on these findings, Hakonarson is planning a clinical trial in selected ADHD patients of a drug that activates the GRM pathway.

“If drugs affecting this pathway prove successful in this subset of patients with ADHD, we may then test these drugs in autism patients with similar gene variants,” he said.

The three gene families found in the current study have notable functional roles. The CALM1 network includes the calmodulin family of proteins, which regulate cell signaling and neurotransmitter function. The MXD-MYC-MAX gene network is involved in cancer development, and may underlie links reported between autism and specific types of cancer. Finally, members of the GRM gene family affect nerve transmission, neuron formation, and interconnections in the brain — processes highly relevant to ASDs.

The functional activities identified in the current study are consistent with a recent multicenter study in which Hakonarson participated, published May 1 in the American Journal of Human Genetics. That study, led by scientists from Paris and Toronto, and using Autism Genome Project data, found hundreds of rare ASD-related gene variants converging on gene networks involved in neuronal signaling, synapse function and chromatin regulation (a biological process affecting gene expression). Many of the genes in these networks have been implicated in other developmental disorders besides autism.

“Even though our own study was large, it captures only about 20 percent of genes causing ASDs,” said Hakonarson, who added that still larger studies are needed to further unravel the genetic landscape of autism. “However, strong animal data support an important role for the glutamate receptor pathway in socially impaired behaviors modeling ASDs. Because the GRM pathway seems to be a major driver in three diseases — autism, ADHD and schizophrenia — there is a compelling rationale for investigating treatment strategies focused on this pathway.”

The AGRE Consortium, a program of Autism Speaks, provided resources and data for this study. AGRE is supported in part by the National Institutes of Health (including grant MH081810).

“The impact of the metabotropic glutamate receptor and other gene family interaction networks on autism,” Nature Communications, published online June 6, 2014.