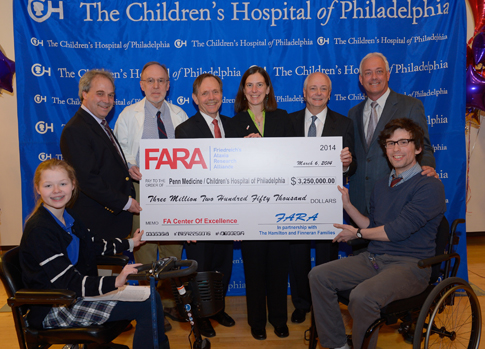 FARA check presentation March 16, 2014 — For the past 16 years, Penn Medicine, Children’s Hospital of Philadelphia (CHOP), and the Friedreich’s Ataxia Research Alliance (FARA), a nonprofit organization dedicated to curing Friedreich's ataxia, have collaborated to provide and push forward the care needed by FA patients.

Friedreich’s ataxia (FA) is a rare, progressive neurogenetic condition found in approximately 1 in 50,000 people worldwide. While it is relatively rare, it is the most common form of inherited ataxia, a condition characterized by progressive lack of coordinated movement and loss of balance. FA also involves degeneration of heart muscle and nerve cells. Onset of symptoms usually occurs in childhood, and most patients are confined to a wheelchair by their mid-to-late 20s. Myocardial failure and/or arrhythmias are the most common cause of premature death. Currently there are no approved drugs to treat FA.

Three longtime allies have joined forces to create the new Penn Medicine/CHOP Friedreich’s Ataxia Center of Excellence. The establishment of the center was catalyzed by a $3.25 million gift from the Friedreich’s Ataxia Research Alliance (FARA), in partnership with the Hamilton and Finneran families.

FARA, CHOP, and Penn Medicine have also shared in research and clinical trials that have elucidated the metabolic dysfunction underlying FA. Their work has created a database of well-documented patients and a pipeline of more than 20 drug candidates ready to be mined for new therapies. Today the FA clinical program at CHOP is the largest in the world.

“Nothing is more rewarding than seeing science at work in the service of the patients and families who suffer from rare diseases such as Friedreich’s ataxia,” says Glen N. Gaulton, PhD, executive vice dean and chief scientific officer at the Perelman School of Medicine at the University of Pennsylvania. “Penn and CHOP are fortunate to support many faculty who dedicate their careers to the care of patients with and research on such rare diseases as FA. Funding for rare disease research is a constant challenge. We are thankful to the donors for this generous gift that significantly enhances our ability to make progress toward new biomarkers, drugs and hopefully, in time, therapies for FA.”

The new Center’s team is working with pharmaceutical industry partners to develop drug candidates as well as biomarkers for FA, and this effort fits alongside a broader initiative at Penn Medicine: a gift from an anonymous donor recently founded the Center for Orphan Disease Research and Therapy to support the pursuit of novel therapies for rare diseases of all kinds.

“Integrating cardiac expertise into the care of patients is one major step forward this gift allows us to pursue,” says Philip R. Johnson, MD, executive vice president and chief scientific officer at CHOP. “Rare diseases are often an area where philanthropy can make a difference, and the generosity of these donors will make a significant impact.”

The Friedreich’s Ataxia Center of Excellence is co-directed by David Lynch, MD, PhD, FA program director at CHOP, and Robert B. Wilson, MD, PhD, professor of Pathology and Laboratory Medicine at the Perelman School of Medicine. Lynch and Wilson both serve on FARA’s Scientific Advisory Board, and Wilson was a founding member of FARA’s board of directors and first chairman of its Scientific Review Committee. Wilson has completed a high-throughput drug screen of more than 340,000 compounds for FA drug discovery and is now working with medicinal chemists to narrow in on candidates for clinical trials. Lynch is the principal investigator on several FA clinical studies on disease progression, FA cell biology, and visual dysfunction, among other aspects of FA.

“Achieving a more holistic approach to both research and care is one main intent of our gift,” adds donor and FARA board member Tom Hamilton. “The Center will allow scientists and physicians to exchange insights regularly, not just as projects allow.

“It is very meaningful to me personally to be able to support these core research and care activities at a higher capacity,” says Jennifer Farmer, FARA executive director. “We know these families have needs that can be met, and that now will be met, while treatments are developed.”

The early goals and objectives of the Center include:

Ronald Bartek, FARA president and co-founder, and his wife Rachel, enrolled their son Keith in the first Penn/CHOP FA clinical trial before FARA was established.

Bartek closed the inaugural Center of Excellence meeting last month by noting, “It is not by accident that the FA Center of Excellence is being established here at Penn and CHOP and that more FA patients and families come here than anywhere else in the world. It is because we have always known we will get the best clinical care available, participate in promising clinical trials, and learn about the exciting FA research going on here and around the world. Because the FA team here has always led the way for us, we have long dreamed of providing this team greater capacity to do even more. We are deeply grateful to the Hamilton and Finneran families whose generosity now enables that dream to come true. You know we are all depending on you and we know you will not let us down.”

Penn Medicine is one of the world's leading academic medical centers, dedicated to the related missions of medical education, biomedical research, and excellence in patient care. Penn Medicine consists of the Raymond and Ruth Perelman School of Medicine at the University of Pennsylvania (founded in 1765 as the nation's first medical school) and the University of Pennsylvania Health System, which together form a $4.3 billion enterprise.

The Perelman School of Medicine has been ranked among the top five medical schools in the United States for the past 16 years, according to U.S. News & World Report's survey of research-oriented medical schools. The School is consistently among the nation's top recipients of funding from the National Institutes of Health, with $398 million awarded in the 2012 fiscal year.

Penn Medicine is committed to improving lives and health through a variety of community-based programs and activities. In fiscal year 2012, Penn Medicine provided $827 million to benefit our community.

Children’s Hospital of Philadelphia was founded in 1855 as the nation’s first pediatric hospital. Through its long-standing commitment to providing exceptional patient care, training new generations of pediatric healthcare professionals and pioneering major research initiatives, Children’s Hospital has fostered many discoveries that have benefited children worldwide. Its pediatric research program receives the highest amount of National Institutes of Health funding among all U.S. children’s hospitals. In addition, its unique family-centered care and public service programs have brought the 535-bed hospital recognition as a leading advocate for children and adolescents.

Karen Kreeger, Hospital of the University of Pennsylvania, 215-349-5658, or Karen.kreeger@uphs.upenn.edu.